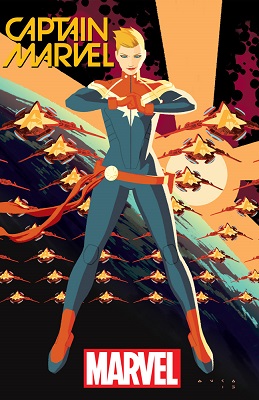 Carol “Captain Marvel” Danvers will take command of her own space station and fleet to defend Earth in a new comic launching next month.

With Secret Wars coming to its close, Marvel has started to open the curtain on the “All-New” universe that will taking the place of the two that collided. Case in point, the publisher yesterday released information and images from the first issue of its new Captain Marvel series. Following the continued adventures of “Earth’s Mightiest Hero,” the titular Carol “Captain Marvel” Danvers, Marvel is already promising stories that will take the character “to new heights on her most daring mission yet.”

Whereas the previous Captain Marvel series was primarily about her duking it out with baddies outside of our solar system, the new book will focus on Danvers taking charge of “the all-new Alpha Flight space program.” Intended to serve as “Earth’s first line of defense” for its seemingly endless parade of invaders, Danver’s new position will find in her in command of an entire fleet in addition to her own considerable powers. As is often the case in the Marvel Universe however, an “unknown enemy” is already waiting in the wings to test her resolve.

Replacing writer Kelly Sue DeConnnick, the new series will be headed up by Agent Carter showrunners Tara Butters and Michelle Fazekas. The series art meanwhile, will be handled by Uncanny X-Men veteran Kris Anka. The first issue of the new Captain Marvel will hit comic store shelves on January 20th. Considering how well-received DeConnick’s take on the character was, we’re willing to bet there will be more than a few fans eager to see how the latest series stacks up.
View Forum Comments