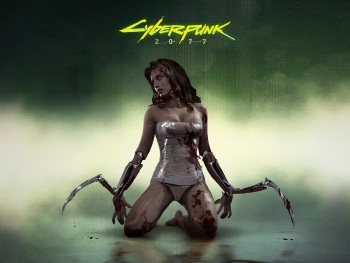 CD Projekt’s Cyberpunk RPG has a slightly new name and an all-new website.

CD Projekt revealed its new Cyberpunk RPG back in May and while it wasn’t widely seen as the best game title ever, at least it came from an honest place: it’s based on Mike Pondsmith’s pencil-and-paper RPG system Cyberpunk 2020. But now the game has a slightly spiffier name that also differentiates it from the original PnP version.

Cyberpunk 2077 will be set a half-century after Cyberpunk 2020 but will still feature some of the game’s well-known settings, including Afterlife, Forlorn Hope and a combat zone overrun by gangs. Like CD Projekt’s famous Witcher franchise, the game will boast a “multi-thread, non-linear story” intended for mature players, with a significant degree of player freedom.

The studio has also launched a new blog which currently contains an few wallpapers, announcement videos and the usual “subscribe to our mailing list” link, plus an introduction by Pondsmith, who is working with CDPR on the development of the game, and a treatise on the difficulties of adapting PnP rules to a videogame format.

“Adapting pen & paper rules to video game is not as easy as it can appear at first glance. The flexibility of an in-person RPG has to be replaced with a strict set of rules. Every skill, attribute and game mechanic has to have a clear definition and place in the game,” the studio explained. “For hardcore Cyberpunk 2020 fans out there, twiddling with rules in such a way may seem like blasphemy. But rest assured that we are working very closely with Mike Pondsmith to ensure that the unique feel of the original, paper game is preserved intact.”

It’s still pretty thin but with CD Projekt’s reputation and the hands-on involvement of the original Cyberpunk creator, I think the potential is very exciting.