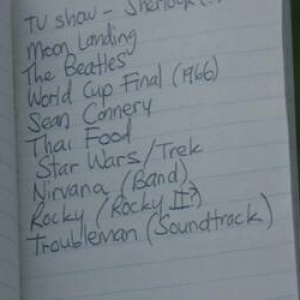 Apparently, Captain America still hasn’t listened to the biggest band in the history of forever.

It might be called Captain America: The Winter Soldier, but Marvel knows which side its bread is buttered on, and that side is of course “massive international ticket sales.” So it is that as the critically lauded sequel makes its way through theaters worldwide, audiences will be treated to a subtle, localized version of the film tailored to a specific country’s tastes.

Luckily, this won’t be anything as absurd as the extraneous, plot-unrelated footage shot exclusively for Chinese audiences in Iron Man 3. Rather, it’s a riff on the charming joke in which Steve Rogers pulls out a notebook to reveal a to-do list of things he needs to watch/listen to/eat in order to catch up with 21st century culture, first seen a few weeks back when the first 10 minutes of the film appeared online.

In the American version of The Winter Solider, his notebook entires are: I love Lucy; Moon Landing; Berlin Wall (up & down); Steve Jobs (Apple); Disco*; Thai Food; Star Wars/Trek; Nirvana (band); Rocky (Rocky II); and Troubleman (soundtrack). As you can see here, the UK version, voted on by British film fans, replaces I Love Lucy with Sherlock, Berlin Wall with The Beatles, Steve Jobs with the 1966 World Cup Final, and Disco with Sean Connery.

I kind of feel bad for British Captain America. Apparently he’s only taking suggestions from people who have only the most pedestrian knowledge of recent cultural history. Specifically, while I love Sherlock, I find it impossible to believe someone recommended that to Steve before Doctor Who?. (Especially since the Doctor occupies a space in British pop culture similar to Star Trek in the US.) Don’t worry Cap, if we run into each other I’ll make sure you get a few deeper recommendations, I swear.

Other countries’ lists are, obviously, similarly tailored – fans are already reporting that Korean audiences will see Oldboyin Cap’s notebook. If you’re outside the US and you’ve already seen The Winter Soldier let us know in comments how the list looks where you are. In the meantime, while we Americans wait for our chance to see it later this week, I’ll ask again: do we think Captain America will end up being a Star Wars fanatic, or a trekkie?

* I still think it says “Pisco,” not “Disco,” but the consensus is that I’m wrong. I’ll add that Disco is a perfectly cromulent recommendation – yes, har har, cheap laugh and all that, but disco was a far more diverse genre than we misremember it today. And besides, Giorgio Morder is a musical genius who was light years ahead of his time. If Steve Rogers ends up defending liberty to the tune of “I’m Left, You’re Right, She’s Gone,” then the world wins.