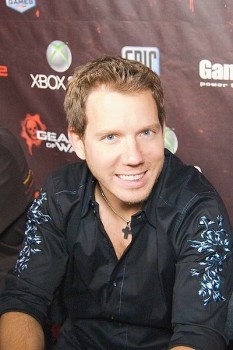 The designer of Gears of War at Epic Games has learned a thing or two about how to talk to the press without being misquoted.

It’s a nightmare for any public figure when your words are twisted or reported out of context, especially when you thought you were just joking or making light of something. Cliff Bleszinski from Epic Games has had his fair share of misquotes making headlines in the videogame press, including his criticism of Quantic Dream’s Heavy Rain. In 2010, Bleszinski said that he loved the game, although he found the children “hideous,” and VG247 used his off-color remark as a headline. He has since learned to use laser-like precision with his words, and frequently uses the constant updates of Twitter to combat any misrepresentation, but he doesn’t think that he’ll stop speaking his mind or telling the occasional joke.

“I now have the power of Twitter to interrupt them and stop something before it goes viral. I’ve had times when I say more or say less. It’s just a matter of being surgical with your words , and making sure that if you say something it can’t be quoted out of context. You have to be a little bit careful about joking,” Bleszinski said.

He specifically brought up the situation with Heavy Rain to prove his point, extolling how much he respects the game once again. “I have done nothing but gush about Heavy Rain, but when I make one side joke about the fact I thought the kids were a little creepy, suddenly it becomes ‘Bleszinski declares war on France.'”

Like most designers these days, Bleszinski uses social networking to keep tabs on industry. “The beauty of Twitter is that if an article like that pops up, one of my followers will alert me to it in minutes and I check it all and I can squash the story before it suddenly become the truth. What happens is one website picks up on it, the other website picks up on it, and it says ‘Hey, I heard you hate French children.’ So you can kill it and nip it in the bud immediately.”

The large amount of followers that Bleszinski has on Twitter also allows him to direct the masses to this site or that, which can overwhelm the website’s servers and even bring them down. “When you get a certain amount of followers, by the way, you can send all your followers to a website and essentially issue a denial of service attack at your will,” he said.

With great power, comes great responsibility and Bleszinski made sure to add that he does not condone DDoS attacks of any kind.

Or does he?!?!!! This reporter isn’t so sure. Hey, I’ve got a great idea for a headline. “Power-Hungry Cliffy B Directs Mob at Enemies” Yeah, that’s the ticket!