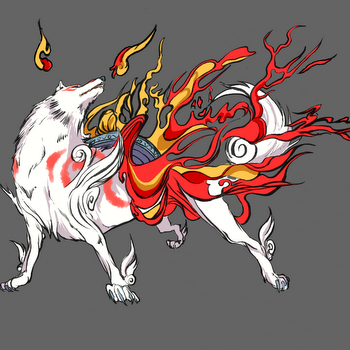 If you’ve spent even a little time around The Escapist forums of late, it’s likely you’ve heard the name Daystar Clarion. He’ll tell you himself that he’s known around the site for adoring Okami and derailing threads, managing to make both friends and enemies along the way. Not only did an abundance of users vote for Daystar to be featured in a Community Spotlight, many people voted against him, making a lot of us wonder… Who is this person that could stir up so much merriment and ire at the same time?

As one user describes him, he’s not only The First Brovenger – he’s “our main source of fun and joviality on these forums. Our first, and last line of defense against the shrieking hordes of rage, hate, and adolescent nihilism that plague so much of the internet. “

Whether you love him or hate him, you’ve got to admit that Daystar is a part of Escapist culture right now. So much so in fact that when his forum friends discovered he couldn’t make it to the Escapist Expo they purchased a plush toy of his avatar and brought it along instead. Throughout the weekend you could find Daystar mingling with an assortment of Escapist staff and content providers, despite never having set foot on the grounds.

We took a moment and get to know the “telltale white wolf”, hoping to uncover some of his mystery.

If I recall, it was around 2007 and like many other posters, I was brought to the Escapists by Zero Punctuation. I quickly learned that there was more to the site than just than just Yahtzee, that handsome devil, and I stuck around, regularly lurking in the forums until I eventually decided to make a profile. I’m not sure why I waited so long to join, now that I think about it…

Tell us a little about your avatar.

It’s Amaterasu (often referred to as Ammy) from the Playstation 2 title, Okami.

The game is based on Shinto folklore, Amaterasu being the Goddess of the Sun in the form of a wolf. Plants and flowers sprout at her feet as she runs, it’s all very pretty manly and has a great flow to it.

Originally, it was just Ammy running, but thanks to the fine work of trollnystan, Ammy now has come clouds to keep her company. TopazFusion resized the image for me after the recent update.

Where does your name come from?

Daystar Clarion is the name of a sword from the Symphony of Ages, a series of fantasy novels by the author Elizabeth Haydon. The weapon resembles a 14th cenutry Italian sword, the kind with a finger guard.

It was forged from a piece of star and consecrated in fire and ether (the element of the stars). When wielded by specific individuals, the sword is actually on fire, and any wound inflicted on an opponent is instantly cauterised.

My attachment to the actual book series has dwindled, and I’m not really as fond of them now as when I was younger, but I’ve always liked the sword and its name, so I use it as my username any chance I get. .

Who are the Injustice League and the Brovengers?

I don’t remember the specifics, but from what I recall, me and Hazy992 had a habit of posting whimsical nonsense in troll or otherwise pointless threads. This sort of made us a duo (or ‘bros’) and eventually, other posters joined in. This was around the time The Avengers was coming to cinemas so we rolled with the idea of The Brovengers, a group of posters who fought against the evil of boredom

PsychicTaco115 sent me a PM around that time, suggesting that no superhero team is complete with a team of super villains, and the Injustice League was born to mock oppose all our mock hero efforts. .

The Jimquisition, Zero Punctuation, Critical Miss, The Big Picture, Escape to the Movies, Space Janitors, I love all these shows, as well as the Newsroom content and a number of articles written by the staff.

My favourite though, would probably be No Right Answer.

The show is hilarious and Chris, Kyle and Dan come across as genuinely having fun while at the same time, raising some quite interesting points.

Being fun and quite interesting is my idea of a brilliant time.

If I take a look inside your refrigerator what would I find?

Just the standard fare really, as well as some Irn Bru. I’m ashamed that my fridge isn’t more interesting.

If you won the lottery, how would you spend the money?

My fiancée would make me do the sensible things and buy us a house as well as have a ‘lovely wedding’ as she put it. I’m not sure how the latter is considered ‘sensible’, but she and her fist assures me that it is.

I’d probably stick it in the bank and live off the interest, buying all the video games. I’d also book myself a flight and a ticket to the Escapist Expo to meet you beautiful people.

Who is your favorite historical figure, and why?

I won’t go into the whole evolution vs creationism thing, but needless to say, the man changed the way we look at the natural world.

He also reminds me of a hilarious story involving Galápagos tortoises and how delicious they are.

What are your hobbies, besides lurking on The Escapist forum?

I likez to play teh vidja gamez!

Also, I love to watch stand up comedians, as well as comedy panel shows and various other British comedies, such as Top Gear, Blackadder, Red Dwarf, and other classics.

I also like watching a few US TV shows, such as Firefly, House, How I Met Your Mother, and The Big Bang Theory.

I also dabble in some anime, not much, but I love Ghost in the Shell, Cowboy Bebop, and Outlaw Star.
I’m afraid I’m not that incredibly interesting.

What is your day job?

Currently I’m unemployed, which may have something to do with why I post so much on the forums.

I apply for work every day, however, so by the time this article is up, I may be in work, so fingers crossed.

What is your favorite videogame and why?

This may come as a huge surprise, but my favourite game is Okami.

It’s everything I want from a game. Brilliant music, stunning visual aesthetics, loveable characters, a great story and some unique gameplay mechanics.

As I stated earlier, the game is based on Shinto folklore, so culturally, it’s a very Japanese game. Thankfully, it’s presented in such a way that the barrier of entry is low and no prior knowledge of the subject is needed to fully enjoy this classic gem.

I’d heartily recommend that anyone who enjoys Zelda-esque titles, or indeed, a game that tries something new, gives Okami a chance to steal your heart like it did mine.

Tell us a secret.

official thread or user group! When nominating, please tell us why this user deserves to be in the next Community Spotlight and provide links if possible.