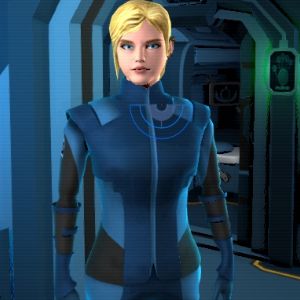 These days, we have no shortage of games with enormous worlds to get lost in, usually featuring fully-voiced NPCs, branching story paths, and extensive world-building lore. Consortium is not one of these games, although it does contain all of the above elements. Instead, Consortium is a big-thinking RPG on a small-scale, limiting its focus to a single airplane while building a massive sci-fi universe around it. Not only that, but the game subversively twists your expectations until you’re left wondering who mixed the Deus Ex chocolate with your Stanley Parable peanut butter.

The date is December 21, 2042, and Earth is almost at peace. Humanity has ended its reliance on fossil fuels, resolved most long-standing international conflicts, and placed an organization called The Consortium in charge of global peacekeeping efforts. Consortium officers are the investigators, security experts, and technologically-advanced soldiers that protect the future from chaos, patrolling the planet aboard futuristic airships like the Zenlil. That is, until a routine flight to Dublin uncovers a murdered crewmate, malfunctioning computer systems, and militant extremists targeting the vessel over a personal vendetta. With events rapidly spinning out of control, Consortium Officer Bishop Six must investigate how these events fit together, preventing an international incident while the entire world watches.

There’s just one problem: You’re not Bishop Six and Consortium isn’t a game. You are playing as yourself, sitting at your PC as a computer program controls Bishop Six in a parallel universe. Bishop Six’s actions in 2042 will have an unprecedented impact on all of reality, but iDGi doesn’t yet understand how. To find out, the developer released Consortium as a game, hoping players will explore all possible timelines while it measures Six’s impact on the timeline. This is no a spoiler or end-game twist. From the opening scene, you are an outsider to Consortium‘s universe, influencing events just to see what happens. And once you’ve wrapped your head around that scenario, you’ll start wondering how many other games could operate the same way. 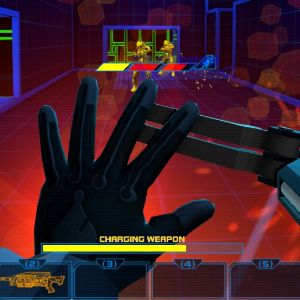 On a purely mechanical level, Consortium is a story-driven action RPG in the vein of Deus Ex and Mass Effect. Mission objectives can be completed however you’d like, whether your preference is murdering enemies, deploying non-lethal weapons, or peacefully resolving disputes through negotiation. Each NPC carries positive and negative alignments towards Bishop Six that change when you interact with them, unlocking new story branches in the process. Combat systems, unfortunately, are clunky and over-complicated by comparison. When you’re not running or shooting enemies, you’re juggling limited nanite supplies that restore health, repair armor, and power non-lethal weaponry. This makes a pacifist approach almost impossible at higher difficulties, but otherwise the mechanics fit together in a functional, if awkward, manner.

The true genius of Consortium is that it codifies gaming tropes into universal laws. Why would protagonists act courteously one moment and become sociopaths the next? Simple: Someone is dictating their actions using a controller. What happens when Bishop Six dies in-game? He dies in one universe while you “load” another timeline. How is the hero prepared for every enemy assault? His player is save scumming to dodge incoming fire. Ludonarrative dissonance cannot exist in Consortium because dissonance is the narrative, and part of the fun is seeing how far the logic will ultimately take you.

Even ignoring Consortium‘s metaplot, the local universe remains highly complex. Before leaving my cabin, I logged into a terminal and discovered news reports, emails, and personnel files encompassing decades of detailed backstory. Thirty minutes later, I’d learned about the organization’s beginnings, my fellow crew members, a former Bishop with an itchy trigger finger, and botched missions aboard orbital space stations without scratching the surface. The fact that I lost track of time in Consortium‘s in-game history is a testament to world-building; iDGi could publish the compiled lore as a standalone novella and have a genuine sci-fi thriller on its hands. More importantly, every aspect of the backstory ties into Zenlil’s current crisis, from the personal histories of crew members to the founding of the Consortium. These reports aren’t just bedside reading, they’re optional context for everything the player might experience. 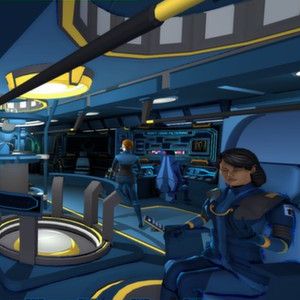 Most of your time in Consortium is spent working alongside NPCs, usually crew members of the Zenlil. Even though most NPCs are referred to by rank, each character has a unique personality that comes into play with every interaction. Rook 25 is an officer who struggles with the harsh discipline she needs to enforce across the ship. When Rook 9 isn’t making jokes from the Zenlil’s cockpit, he’s making a personal call to a mother suffering from Alzheimer’s. Nationalities and religious affiliations vary from character to character, and there’s even avid gamers defending their chosen hobby. Packing so many details into conversation occasionally makes for awkward dialogue, but it’s still quite charming. You’ll find yourself growing fond of the Zenlil crew as you get to know them, which makes it all the harder once your start investigating them as murder suspects.

At certain points, you’ll be more interested in the fictional narrative than the meta-narrative, which can be a little jarring. Unlike The Stanley Parable, which let players choose to explore the metagame, Consortium‘s parallel timeline plot can never be ignored. NPCs ask questions only Bishop Six knows the answer to, point out contradictions in your dialogue choices, and find it suspicious that you know so little about “current” events. It’s incredibly difficult to roleplay as Bishop Six during your first playthrough, yet the Zenlil’s story is so multifaceted that you’ll wish you could.

That’s not the only criticism Consortium lends itself to. The game feels too short, it ends on a cliffhanger, and enemy encounters are too rare to justify the convoluted combat mechanics. That said, Consortium is clearly designed with multiple playthroughs in mind. The achievement list teases several features that bypassed me entirely, and it’s even possible to even beat the game without drawing your weapon or speaking to other crew members (although probably not at the same time). I do wish Consortium had a more conclusive ending instead of spending its entire third act readying an obvious sequel. Still, there’s some comfort in being able to replay the entire game over 2-3 hours, trying out new strategies I hadn’t considered yet.

Bottom Line: Consortium is an ingeniously subversive gem, containing enough backstory to fill a Triple-A trilogy while focusing exclusively on an airship crew in distress. The execution is a little clunky at times, but Consortium still has the charm and depth to encourage multiple playthroughs as we wait for the sequel.

Recommendation: Buy it, play it, replay it. Repeat as appropriate across timelines.