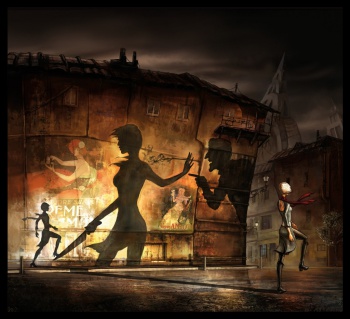 Contrast is yet another delightful little indie title that I had the pleasure of experiencing at PAX this year. Unlike a number of other games at the show, Contrast is not looking to bring back the old days of gaming, instead it wants to do something new and unique. Blending puzzles and platforming with a light and shadow aesthetic, Contrast puts you in the shoes of Didi’s imaginary friend in an old-timey circus setting amidst family turmoil. Didi’s mother is a cabaret singer, while her father, indebted to the mob, is trying to start a circus to afford his loans.

The story is told through the eyes of a child, so you won’t always get exposition on what’s going on. Instead, you’ll see the goings on as Didi experiences them, with some scenes being entirely unexplained, and relying on the player to piece together what’s actually happening. I’ll avoid any spoilers, as it does seem to be a rather touching story about how a child experiences a family being torn apart. From what I saw, however, the story takes a back seat to the gameplay, which is where Contrast really stands out.

The gameplay experience, like the world itself, is split between light and shadow. As Didi’s imaginary friend, you’ll be able to meld into shadow, or pop back into the light at will. You can only interact with shadows while in shadow form yourself, so you’ll need to tinker with the environment in light form in order to create the shadows you need to traverse certain platforming sequences. It’s a really clever interaction between the two modes, and offers an unexpected layer of depth in an otherwise fairly simple game.
To progress through the game, you’ll be collecting Luminaries, which are glowing orbs scattered around the world. You can use them to power objects like spotlights, which will create the shadows you need to platform your way to the next area. You can even drag objects like crates into the shadows with you, or manipulate light sources around the world to create the desired shadow sizes and shapes.

The section I got to play was in the heart of the circus, attempting to get a carousel back in working order. While the light world stays largely the same, once you start the carousel spinning, its rotation will cast shadows of the horses on the walls for you to platform across. Jumping from shadow to shadow, you’ll have to enter and exit shadow form expertly to maneuver your way to the next area. While it was fairly easy to see what you were supposed to do next, the execution turned out to be a bit more of a challenge.

After two and a half years of development, Contrast is slated for release alongside the PlayStation 4 on November 15 for Xbox 360, PS3, PS4, and PC via Steam. Offering 5-6 hours of gameplay across three acts, Contrast will set you back around $15.