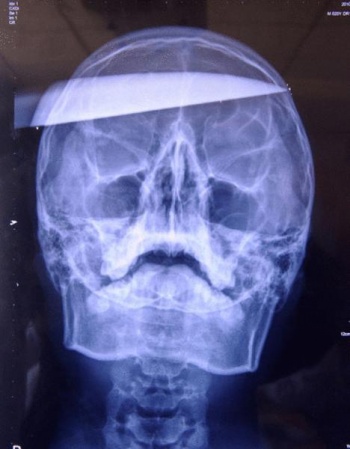 A 17-year-old Chinese boy was stabbed in the head with a knife during a fight that erupted over cheating in a match of Counter-Strike.

Counter-Strike is apparently very serious business. A game of the classic Half-Life mod turned near-deadly when a group of youths playing at an internet cafe in the province of Jilin in northern China noticed that the 17-year-old boy who was their opponent was using wall-hacks. A scuffle broke out between the accused hacker and his victims, and it turned violent – and at the end of it all, the hacker had a 30cm (~11.8in) knife through his head. The assailants fled the scene shortly after.

The boy was rushed to a hospital, where doctors decided to operate immediately. Miraculously, he survived through the operation: According to medical staff, the knife avoided major arteries that could have resulted in a fatal hemorrhage, and it also missed damaging any of the parts of the brain that deal with the body’s motor control. On the other hand, it’s still a foot-long blade going through the kid’s brain, so while he may be alive it’s impossible to think that there won’t be any lasting repercussions.

However, after extracting the knife after a grueling 10-hour surgery, the doctors noticed that the blade was rusty, and so are keeping the youth under close watch in case the rust causes complications.

The internet cafe in question was reportedly popular amongst youth for not requiring ID, something that is common as China’s internet laws grow increasingly draconian. With this incident drawing international attention, though, it’s almost a sure bet that the owners and operators of this particular wang ba will probably find themselves in hot water.

I think we can all agree that cheaters should be punished, and knifing people in Counter-Strike is nothing new in itself, but this is taking it a bit too far.

(Hot-Blooded Gaming (Warning: Graphic image of the victim) via GamePolitics)