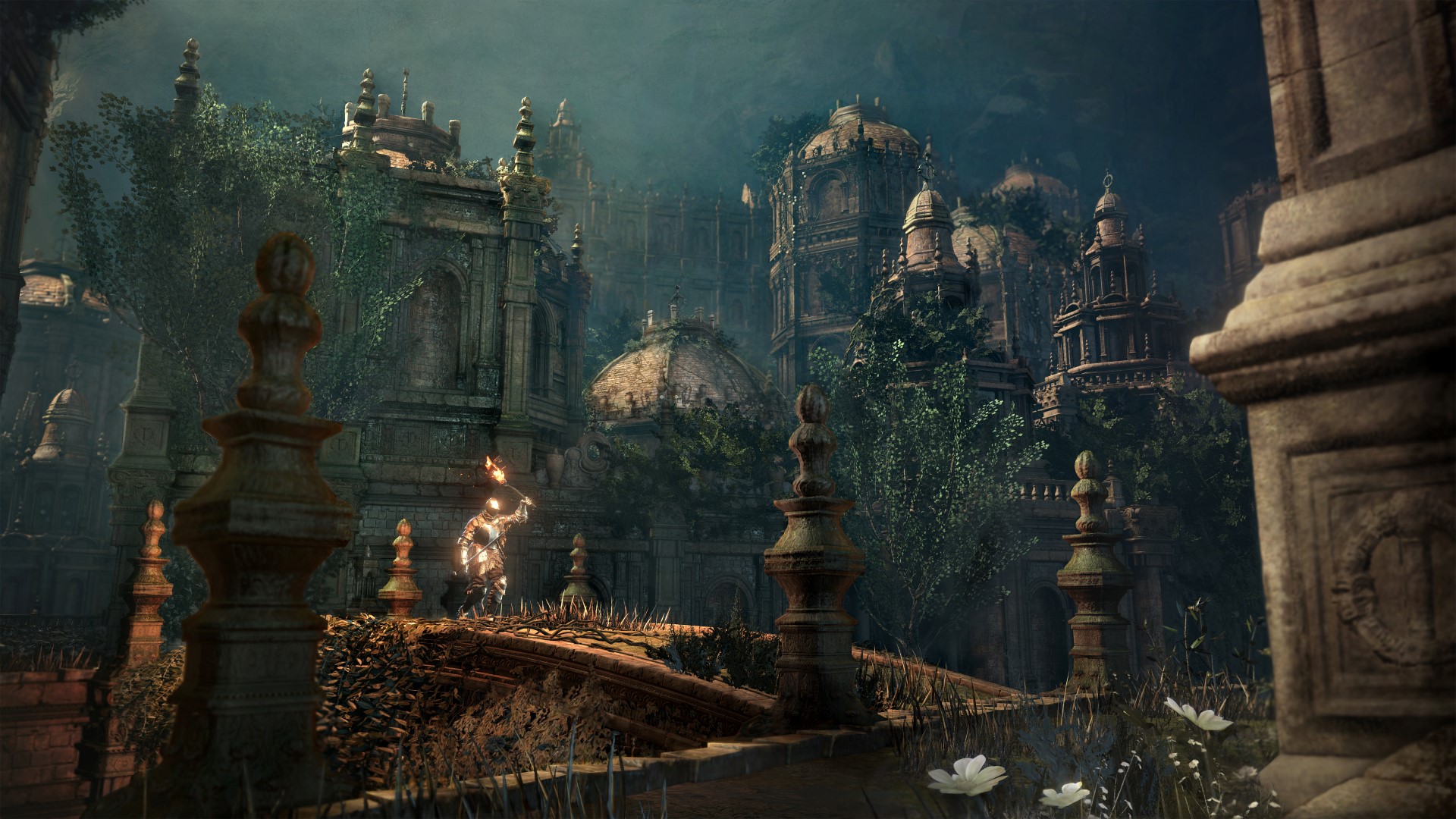 Continue your march through the titular Ringed City in the final part of the final DLC for Dark Souls 3. This time, you’ll encounter even more unique enemies. Keep your wits about you with the step-by-step guide below.

Things heat up in the second location — you’re now in the Ringed City proper, and two reoccurring enemies want to stop your Chosen Undead from reaching the Church of Filianore. You’ll have to deal with Judicator Argo, a giant creature that summons ghostly armies to aid him, and a massive dragon called Darkeater Midir.

That’s just the start. Two dangerous bosses, and one optional boss, reside within the Ringed City walls. See how to find them and more with the complete guide.

Need help getting started? Check out the previous part of the The Ringed City walkthrough, with step-by-step instructions to help you survive The Dreg Heap.

The flying demons deposit the Chosen Undead on a peak overlooking the Ringed City. Turn around to collect a [Titanite Slab] from the corpse, then follow the mountain path down to the first bonfire. Near the bonfire, talk to the strange NPC (a corpse-like figure on the ground) to learn your next goal – a church at the base of the cliff.

The [Mausoleum Lookout Bonfire] is found on a high wall of the Ringed City. Use the stone markers to hide from the ghostly retinue of knights that appear periodically ahead. Wait for the legion of archers to disappear before sprinting forward.

As long as you reach cover before the next wave of archers is summoned, they won’t appear behind you. If your timing is off, even a little bit, they’ll spawn and surround you.

Dodge until they disappear, or rush ahead to a stone barrier that forms the greater part of a circle, giving you cover from both directions.

Enemy Note: The creature in the distance is the Judicator Giant – it summons waves of spectral archers. Kill the Giant to stop the endless stream of archers. Or, you can simply run by him and come back later. 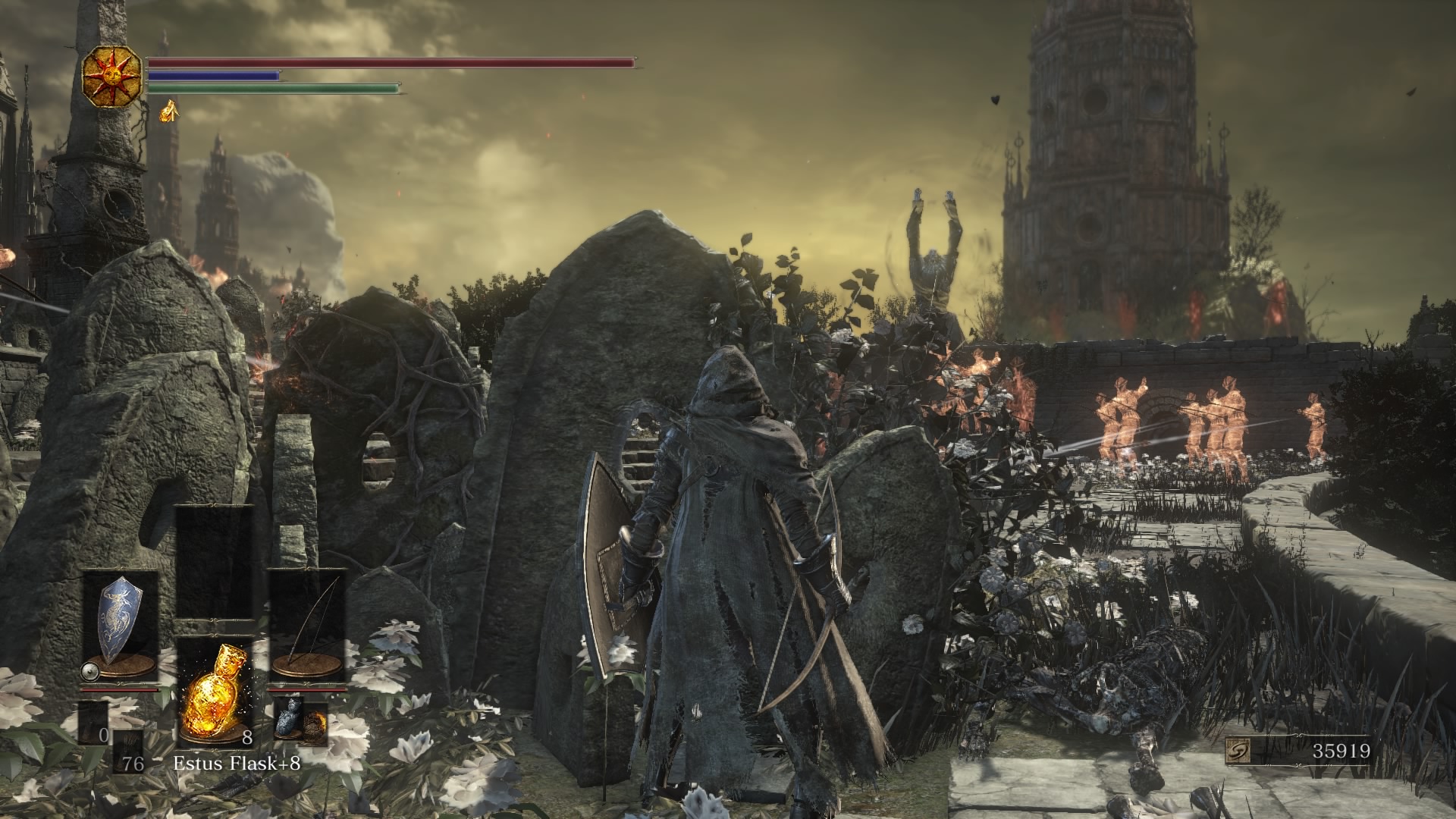 The giant summons waves of archers (even at close-range) and calls on an immortal fighter to help him. The giant can attack, too – a single stomp from the giant can be an instant kill.

Underneath the giant’s sitting location, enter the mausoleum to collect a [Hidden Blessing]. There’s also an [Ember] on the left side of the wall. For defeating the giant, you’ll get a [Divine Blessing]. There are also [Titanite Chunks], [Embers], and [Green Buds] scattered throughout the wall.

Find the stairs to the right of the mausoleum / giant – follow this path down to encounter a locust hiding in a small alcove. The massive cathedral is in the distance.

Enemy Note: The hooded figures use lightning magic and drop [Dung Pie]. They like to attack from above or around corners. Watch for them on walls or ceilings.

The path leads down to your next bonfire. 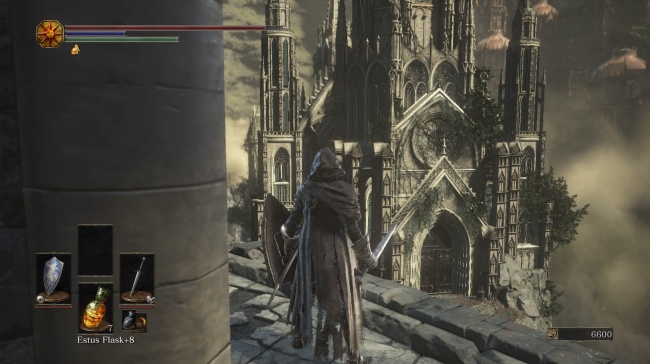 Enemy Note: Through the doorway by the bonfire, grab the [Purging Stones] from the corpse. Ahead, you’ll encounter enemies with the curse effect. They glow with unnatural mist, and standing close or taking damage will build up your curse meter. When the meter fills completely, you’re dead.

There are two paths from the bonfire. Go through the interior door and down the steps to pursue the lower path. The second path leads to a dead-end balcony.

Enemy Note: On the lower path, you’ll also encounter hag pilgrims. Stay out of the ring they summon and wait for them to un-turtle from their impenetrable stone shells.

Past the first Ringed Knight and hags, you’ll reach the upper level of a tower’s interior. This round chamber is guarded by multiple hags that summon deadly magic circles beneath the player.

Take the spiral stairs down to encounter another Ringed Knight.
There is a hag on the middle floor of the tower. To reach it, drop down onto the chandelier and running-jump to the balcony. There’s [Twinkling Titanite] on the balcony corpse hanging off the edge.

Quest Note: Outside the tower, you’ll reach a massive staircase. Go up the stairs and interact with the door – talk to her three times and make sure you say the name “Gwyn”. She’ll give you a simple request – kill the dragon Midir in the Church of Filianore.

A pair of giants patrol the huge stairs. Separate them and lead one back into the tower with the spiral staircase. Watch out for a third giant around the corner, opposite the tower door.

Take the stairs down to the swamp. If you run past the giants, they’ll ignore you and return to their patrols.

Once you reach the swamp area, go up the stairs to the right to find a new bonfire. 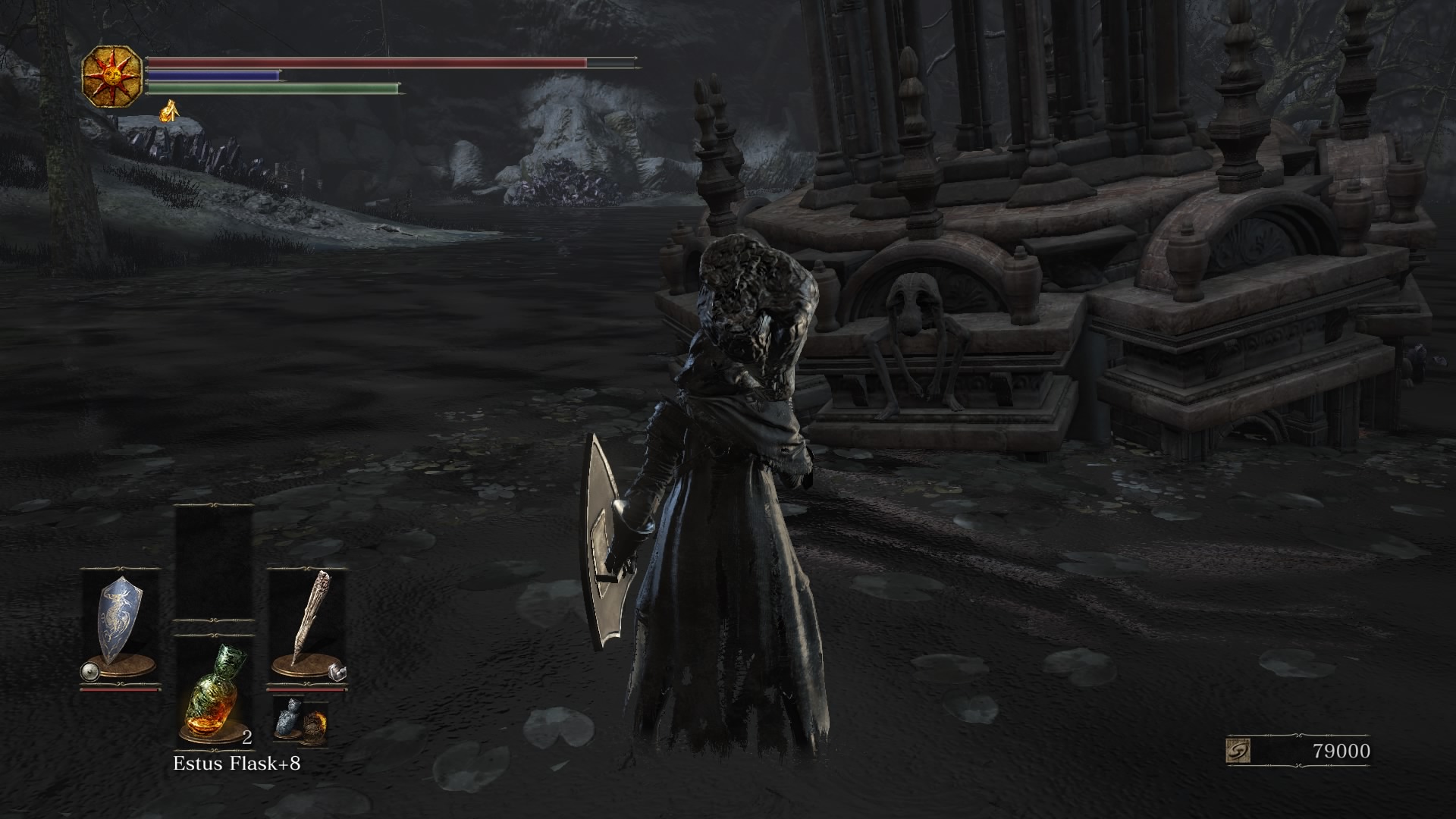 From the stairs-entrance to the swamp, go left to find an alcove guarded by multiple stone-backed hags. Climb the ladder to reach a high tier where two Ringed Knights are waiting on either side of the bridge.

To progress, approach the Judicator Giant in the swamp.
Like the previous giant, he will summon ghostly warriors to defend himself. They will appear / disappear periodically. Wait for the archers / warriors to complete their attacks, then strike the giant between summons.

Left of the Judicator Giant, up the hill to find a statue and an NPC Locust.

Approach the massive sunken structure in the distance beyond the Judicator Giant. Use the tilted rooftops to reach the cliffs on the right side of the swamp.

[Weapon Location] Find the [Church Guardian Shiv] item in the chapel along the left wall of the swamp. This building is surrounded by praying locusts.

Climb the large sunken structure rooftop. It’s the largest landmark in the swamp. Stick to the right side, guarded by multiple Ringed Knights, to reach a bridge to the mountain path. The bridge connects the sunken building to the cliffs below the Church of Filianore.

To the right of the bridge, unlock the gate that leads back to the [Ringed City Streets] bonfire. Now you can skip the swamp through the shortcut.

[Shield Location] Look beneath the bridge near the Ringed City Streets bonfire shortcut to collect the [Dragonhead Greatshield].

Crossing the bridge will activate the great dragon. It strafes the cliff path up to the Church of Filianore, laying down a stream of fire.

Run to the caves on the right cliff walls for cover, or stand and block to absorb the fire attack. It looks impressive, but isn’t that powerful.

Enter the church underground and take the stairs down on the right. Drop down from the ledge marked with red clothe to find a complex path – beware the Mimic! The treasure chest will come alive if you attempt to open it. The Mimic drops the [Symbol of Avarice].

If you go up and approach the crystal lizard, the stairs will collapse, dropping your knight into a narrow catacomb path.

Continue up the stairs beyond the mimic and enter the catacomb interior chambers where Chaos Skeletons spawn from the piles of bones. Follow the stairs to return to the central chamber’s spiral staircase.

The stairs lead up to the next bonfire.

Leaving the catacombs, you’ll return to the exterior cliffs. Midir the dragon will reappear and breath fire down the path.

When Midir raises its head, rush and attack its claws. It will attack with bites and use its claws at close-range, so better to retreat and wait for another fire-based attack.

You’ll have to kill Midir to progress. Midir gains new, imposing attacks as it loses health, but the same simple strategy will apply.

When Midir is down, cross the bridge to reach the door lit by two torches. Up the stairs, pass by the statue of Gwyn to reach the exterior of the Church of Filianore. 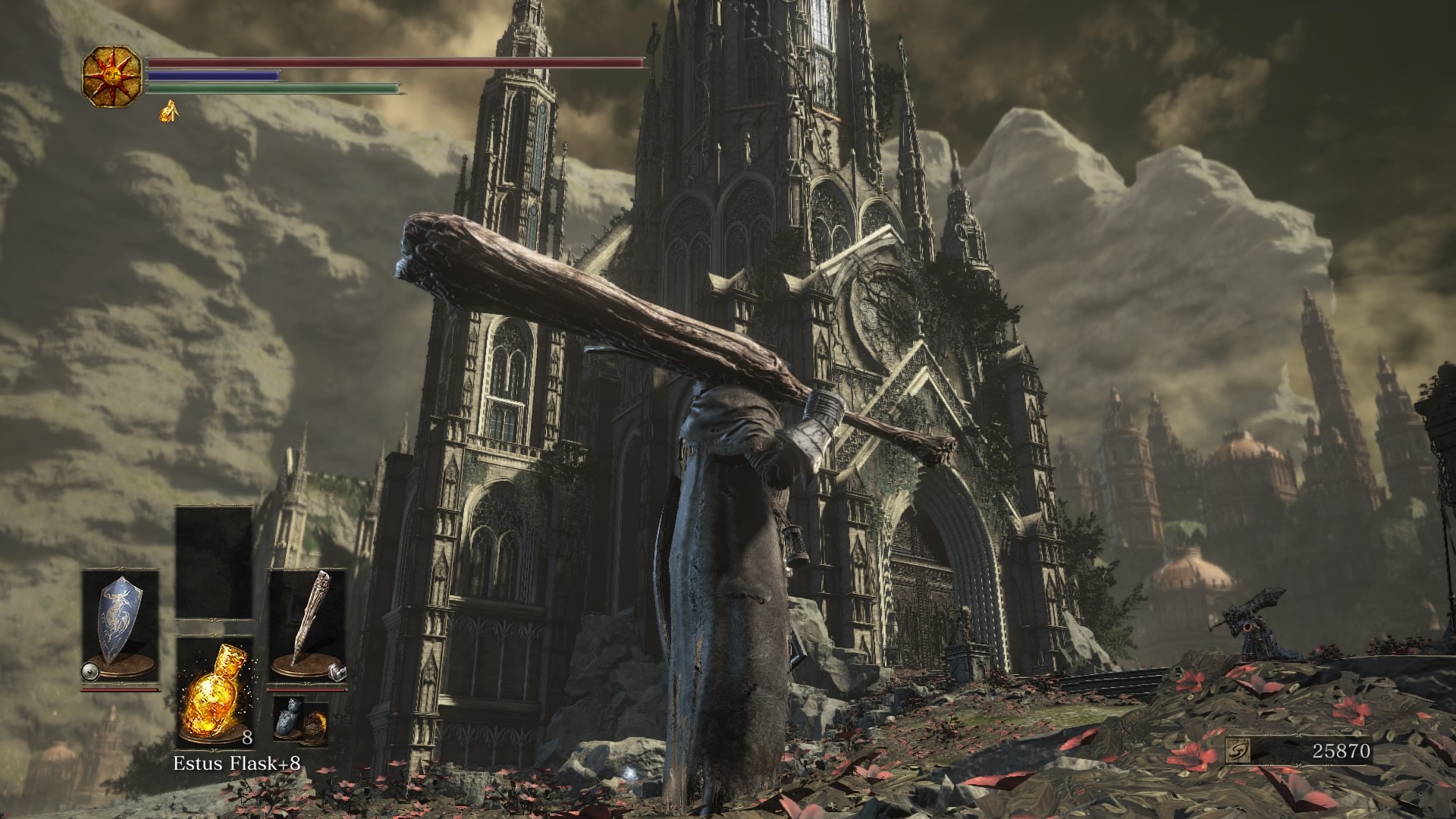 At the altar, the Chosen Undead can offer [Filianore’s Spear Ornament].

There is a [Ritual Spear Fragment] found behind the altar itself.
Approach the Church of Filionore and a voice will come from inside. Push open the doors and step through the fog door to encounter the second boss.

For defeating Halflight, you’ll get Filianore’s Spear Ornament. Find the Bonfire beyond the boss chamber, up the curved steps.

Ride the elevator up to the church rooftop to reach Filianore’s resting place in the high tower.

Push open the doors to find her. She’s resting with a strange object. “Touch the embraced shell” to stir Filianore and travel to a new location.

Step out onto the vast wasteland of society. All that’s left is a sea of ash and ruin, with a city in the far distance. Exit through the ruined hole in the wall.

On the empty field, find a crowned figure crawling toward Filianore’s corpse. Follow the fallen king’s tracks toward an empty archway, and down to the circle where the old lords once sat. 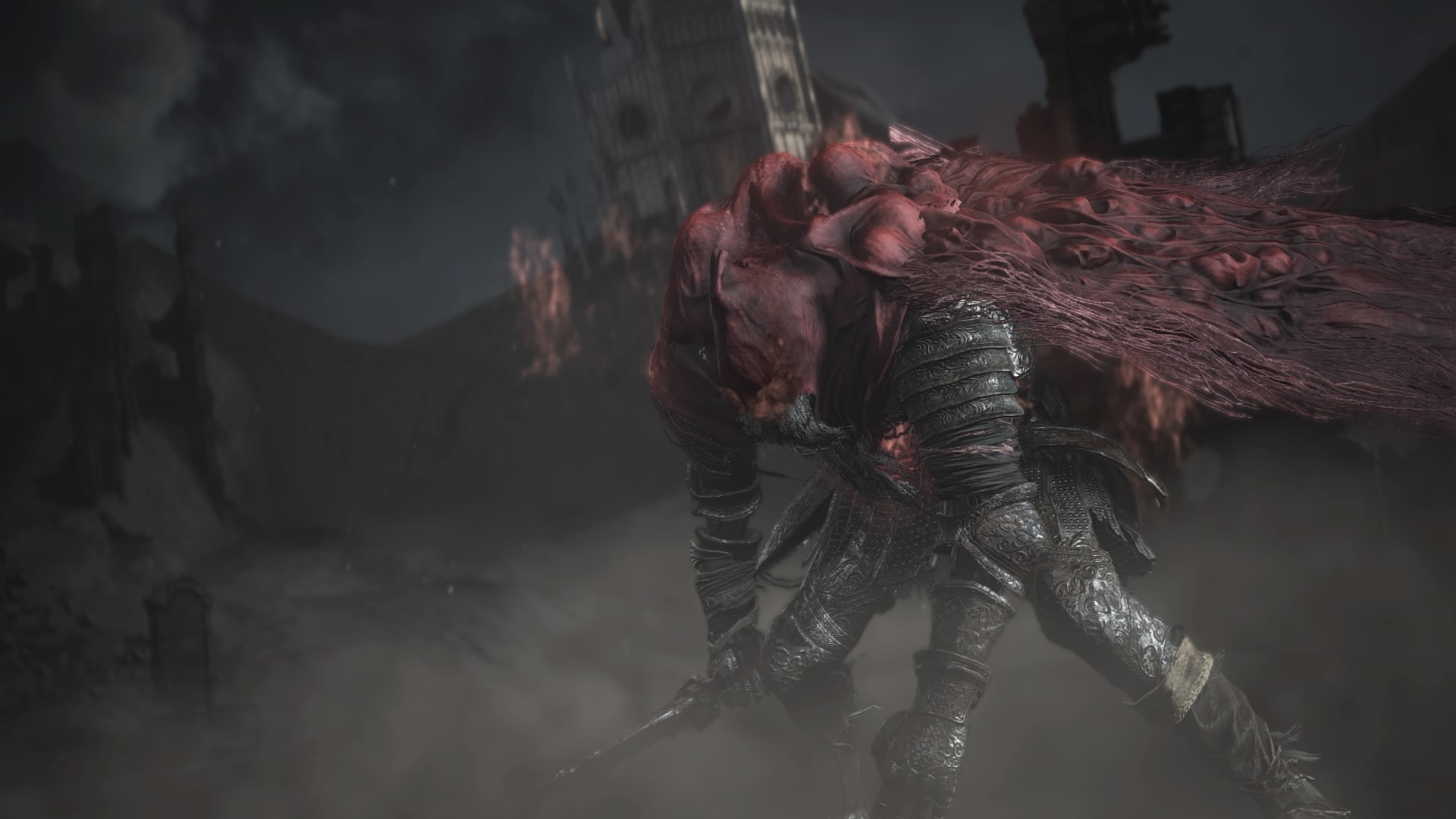 A sad creature in a red hood is waiting for you. The final boss of The Ringed City DLC is down below. Come prepared, because this might be the most challenging boss yet.

Dark Souls 3: The Ringed City – How to Beat Every Boss

For defeating Gael, you’ll get the [Soul of Slave Knight Gael] and [Blood of the Dark Soul].

In the center of the Pygmy King thrones, activate the [Slave Knight Gael] bonfire.

In this area, find a secondary ruin. Through the archway, you’ll encounter Shira, Knight of Filianore. She ambushes you, but only after you’ve killed the dragon Midir.

[Armor Location] Return to the Ringed City to find the door where Shira offered the quest. After defeating her in the ashen wasteland, the doors will now open. Collect the [Shira Armor] set from the praying corpse inside.