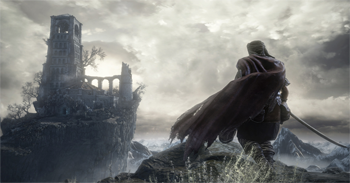 Bandai Namco has released a new batch of screenshots for Dark Souls III which, among other things, show a location familiar to series fans, Firelink Shrine.

According to a press release accompanying the images, Firelink Shrine will represent the first step in the player’s journey through Dark Souls III. To reach it, they’ll have to overcome Gundyr, also revealed in the new shots.

Along with the screenshots, some concept art was also included, depicting a few of the game’s NPCs and a creature that looks like an eyeless wendigo which will probably haunt my dreams for a while.

Check out the full set of images in the gallery:

Dark Souls III isn’t too far off now. The game is scheduled to release April 12 on PC, PlayStation 4, and Xbox One.