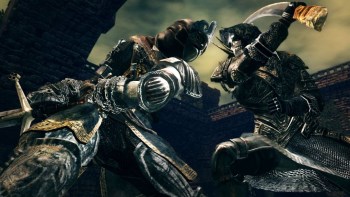 Bandai Namco is looking into other options but says the PC version of Dark Souls will continue to use Games for Windows Live for the foreseeable future.

The word on the street is that Games for Windows Live will go dark this summer, a final, merciful end to an online platform that never caught fire with gamers, largely because it was never very good. But while other publishers have taken steps to move away from GFWL, Bandai Namco says Dark Souls is hanging in there.

“With the release of Dark Souls II, many players have been asking questions about the continued support of Dark Souls I. We thoroughly appreciate the dedicated fans who are adventuring through Lordran (maybe for the first time!) and we’d like to clarify a few points:

I suppose there are two ways you can take this. You can be baffled by, and perhaps angry at, the decision to stick with Games for Windows Live; or you can take heart that the company is continuing to look into alternatives like Steamworks. If I was a cynic I might says there’s a third possible reaction: Tiredly resigned to the likelihood that Bandai Namco is just stalling, in hopes that by the time Microsoft gets around to pulling the plug, nobody will care.

Fortunately, I’m not a cynic, but I do wonder why the publisher felt the need to issue a statement saying that it’s going to keep doing what it’s been doing all along. After all, more than two years have passed since it said it was “aware” of the resistance to Dark Souls employing Games for Windows Live, and I can’t believe that the demand to ditch it has grown stronger since then. On the other hand, that two-year-old statement might also provide a clue as to why Dark Souls is sticking with what doesn’t work very well: Bandai Namco said at the time that it opted for GFWL because of the “ongoing partnership” it had with Microsoft through the Xbox 360 version of the game. Two years is a long time, but it’s possible that those ties still bind.

The Unbelievable Nature of the Next Unreal Tournament