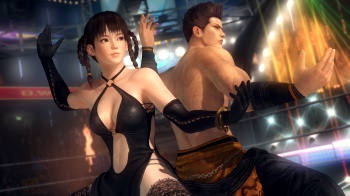 The fighting genre has been dominated for years now by heavy hitters like Street Fighter and Tekken. One thing about the current market is that with the dominance of a couple of big names comes uniformity. Dead or Alive has always broken the typical fighter mold with the counter mechanics that define the core of the game, and Dead or Alive 5 continues this tradition. On top of the counter-heavy foundation, the presentation of the narrative in a single story told from the perspective of many characters also avoids the more traditional approach of the genre, where you’ll typically get a tale for each character.

Dead or Alive 5 takes you through the typical fighting game story of the next big thing in the fighting world, the international fighting tournament – also called Dead or Alive 5. The world’s best fighters are hounded, harassed, and harangued into attending by the exuberant Zach, the tournament host. Zach works for Helena Douglas, DOATEC’s leader, who is working to turn over a new leaf for the once-nefarious organization by dismantling corporate initiatives like Project Alpha, which was responsible for the evil ninja clone, Alpha-152. The story is half erratic, bouncing you between characters with every stage, and half erotic, with the cut scenes featuring disproportionately endowed women in always-revealing attire. The cut scenes are mildly entertaining, and entirely juvenile, with one scene going so far as to be shot from the perspective of a handheld camera accidentally left running in the women’s locker room. Yeah, they really did. If you’re into ogling or you can get past some over-the-top breast-based physics, the game’s story and the antics of its characters will entertain you with weaponized ninja clones, professional wrestlers, and carnies. It’s not exactly Shakespeare, but the large majority of the characters are likeable, if a little shallow in terms of development, and each time you’re thrown into a different perspective, you can’t help but wonder what’s going to happen with the character you just left behind.

Despite the misappropriation of cleavage, the story mode is a lot of fun to play, and will give you four good hours of entertainment or more, depending on how focused you are on completing the objectives. Each of the 70 stages is a 1-round fight with a given tutorial objective, like “Hold 3 High Kicks.” These objectives serve as your tutorial throughout the story line, where you learn the rock-paper-scissors of throws, holds, and strikes, which make up the core of the game’s mechanics. The major downside is that it can be fairly difficult to ascertain what, exactly, is going on at any point in the story, since you’re largely being thrown into the perspective of a different character after each fight. The ambiguity of the story aside, Team Ninja did a great job of making a 70-stage tutorial fun enough to see through to the end by instilling enough interest in each character to make you want to see how their particular sub-plot develops.

The controls are another unique aspect of the game. If you’ve never played a DOA game, it is important to note that the counter system takes center stage. You can know every combo in the game, but if you can’t counter your opponent’s attacks, you’re probably not going to get very far. While it’s not uncommon to have counters in a fighting game, to have them be so fundamental is a novelty of the franchise. While button mashing can be somewhat fruitful, don’t expect it to carry you quite as far as you may be used to in other fighters. The controls are deceptively simple, but in order to truly master the game, you have to be able to read the opponent, knowing what they’re going to throw at you so you can counter it appropriately. Naturally, you don’t have to counter every move, but each time you do, you’re going to be doing a good chunk of damage, while also saving yourself a little bit of pain.

The mechanics of the game are well-implemented, with many strikes causing a brief stun, allowing you to combo off against a largely defenseless opponent. I say “largely defenseless” because even while stunned you can still counter some attacks, and this is where much of the difficulty in mastering the game will come in. It’s hard to avoid every strike, but if you know how to time it and which buttons to press, you can come out of a stun with your own counter-attack. If you’re ever stuck in a corner while your opponent just wails on you, this will be an absolute life saver. Throwing just the right counter at just the right time to get out of an impossible situation is hands-down one of the most gratifying experiences in the game.

DOA5‘s graphics keep you immersed during the fight, with each character having very distinctive animations for their style. The cut scene graphics aren’t quite as impressive as they should be, though, given the stellar presentation of the actual gameplay. The special moves are fairly low-key combos, with none of the wild and crazy animations seen in more stylized fighting games. You won’t be lobbing fireballs from the corner in DOA5. Each fight looks like a well-choreographed scene from an action movie, rather than a string of special move animations.

The multiplayer options are fairly typical for a fighting game, with player matches and ranked matches differentiating the more casual players from the hardcore. In player matches, you can customize your settings, changing the time limit, the number of rounds, and the starting health. The most novel feature of DOA5‘s multiplayer has got to be the tournament option, which allows you to set up tournaments for up to 16 players. Team Ninja also provides a Spectator mode, where you can observe matches in progress, learning your opponent’s wiles before you face them yourself, and even offers a Lobby Chat feature, which didn’t seem to get much use. Online matches were, for the most part, a lag-free experience, which is crucial for such a timing-intensive title.

Bottom Line: DOA5 is fun to play, easy to pick up, and hard to master. Everything you want from a fighting game.

Recommendation: If you’re looking for a Tekken-style button masher, this is probably not for you. For a seasoned fighting veteran seeking a small twist on the genre, however, this should be right up your alley.