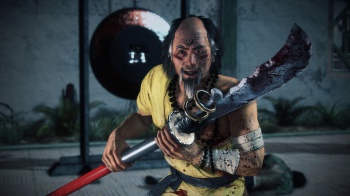 Zombies seem to be everywhere these days. From The Walking Dead and World War Z to DayZ, undead, brain-eating corpses continue to entice audiences to consume media in a voracious manner – not unlike zombies themselves. So how will Capcom find success in a sea of competitors with Dead Rising 3? By making it the most fun you’ll have on the Xbox One at launch.

Fans of the Dead Rising series know the franchise has iconic humor, wacky weapon combos, and lots of fun Easter eggs. All of those are back and much more. I had an in-depth, hands-on gameplay session at a recent Xbox One preview event where I had the opportunity to explore the open world of Los Perdidos, and it is much larger and more in-depth than I anticipated.

You play as Nick Ramos, a blue-collar mechanic who has teamed up with a bunch of survivors to try and escape the zombie outbreak. The gameplay is almost identical to previous titles in the series, third-person action brawler with both melee and shooting mechanics. The new Xbox One controller felt very comfortable and familiar, with the new rumble features as a nice touch.

The first thing I noticed while roaming the streets was the sheer volume of zombies. They are everywhere. The new Xbox One hardware allowed the development team to create more zombies on screen than ever before. Each zombie is assembled by individual body parts in real time to avoid crowds of duplicated zombies, and they are even tailored to specific regions of the world such as bikini-clad zombies near the beach or zombies in business suits near downtown.

To help you navigate through the hordes walking in open world, which is larger than Dead Rising and Dead Rising 2 combined, you can use a variety of vehicles. But in the world of Dead Rising why would you ride a motorcycle when you can create a Rollerhawg from a steam roller and a chopper that throws flames off the front? The correct answer is: You wouldn’t!

There are dozens of crazy combos in the game for weapons and vehicles that are divided into categories like gloves, blunt, electrical and more. You can also combine food items to create temporary buffs like the ability to spit fire. I found a motor engine and some boxing gloves to create the Dragon Punch, a modified set of gloves with mini-engines attached. Not only was it super fun to smash zombies in the face with these bad boys, but the heavy attack is a Shoruyken! Because, you see, in DR3 the devil is in the details. You can collect blueprints throughout the world to build combos on the fly, and you can store already built weapons in lockers found in safe houses. 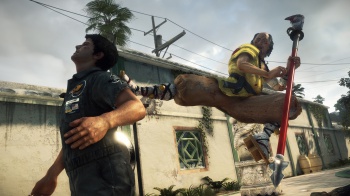 During my demo I spoke with Executive Producer Josh Bridge about inspiration for the combos in the game and he said, “We wanted to make sure we made stuff that made sense…but we wanted to go even further to the most ridiculous ends of the Earth that we could think of…we love to humiliate zombies.”

There’s no better way to humiliate a zombie than with a friend, right? Co-op multiplayer is back, but unlike previous games in the series, player 2 is a story-based character named Dick. Yes, you read right, you will play as Nick & Dick. The co-op partner has their own progression system that saves along with your game. When player 2 goes back and plays on his or her own game, they will have the option to skip those missions.

The progression system is built into the game’s “Survival Guide” and includes a variety of attributes and skills you can upgrade. Some of the attributes include agility, melee, ranged, and smarts. Some of the skills include moves like chin check, curb stomp, and, yes, disembowelment is back.

I asked Josh what new Xbox One features his team was utilizing in gameplay and he told me about the Kinect features. I know most gamers have reservations about Kinect but have you ever been able to shout “You’re fat!” at your TV before? Josh explained that the major boss fights in the game are inspired by the Seven Deadly Sins, and the Gluttony boss is a zombie named Darlene. Using Kinect voice commands like “You’re fat!” allows you to stun her, opening her up for a melee attack. The sheer silliness of it fits right into the style of the franchise, but I did not have the opportunity to fully test its functionality due to the noisy environment the demo was being held in.

You can also use Kinect to shake zombies off you by flicking your controller, use voice to search within menus or give groups of survivors commands during combat. I found the controller flicking feature to be extremely helpful, especially when surrounded by a horde of zombies.

The combination of horror and humor is certainly a difficult one to blend, and so far everything I’ve seen from Dead Rising 3 is right on point. Fans of the franchise will get awesome tidbits from past games and even other Capcom games (which I won’t spoil here), while newcomers will be able to jump right in to the over-the-top combat. Dead Rising 3 is a zombie slaying game at its core, but it brings laugh-out-loud fun and wackiness that sets it apart from the pack. If you are getting Xbox One at launch, be sure to grab your Sledgesaw, tell Dick to jump on your Rollerhawg, and get to humiliating zombies.

To learn more about Dead Rising 3 and see new gameplay, check out my full video interview with Josh Bridge below or click here.