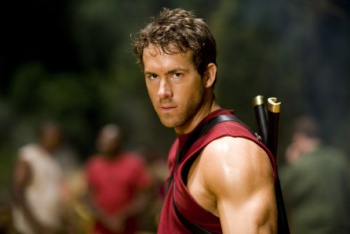 Ryan Reynolds will reprise his role as “the merc with the mouth” in his very own feature Deadpool film.

Deadline is reporting that Fox is in the final stages of closing a deal with Ryan Reynolds for a feature on Deadpool, a role he is reprising from his appearance in X-Men Origins: Wolverine. According to the report, the film is being directed by Tim Miller, who has done strong visual effects work through his VFX house Blur Films. Miller has been developing the film for several years, from a script by Rhett Reese and Paul Wernick, with Lauren Shuler Donner and Simon Kinberg producing.

To add more credibility to the report, Reynolds himself has just Tweeted a Deadpool-related picture, along with the caption “Uh… It’s Chimichanga Time.” Production of the movie is said to start in March, with a February 12, 2016, release date.

If you chose not to remember Reynold’s role in X-Men Origins: Wolverine, we’ll forgive you, as the studio made the, erm, “curious” decision to silence Deadpool after subjecting his alter-ego Wade Wilson to the military experiments that give him his mutant powers. That’s right, they silenced the guy who’s nickname is “the merc with the mouth”.

Nevertheless, Reynold’s quick wit and banter are what make him a good choice for the role (and admittedly, his role pre-military experiment in the Wolverine flick wasn’t bad). We assume Fox will just go ahead and ret-con that decision anyway.

While it’s not quite 100% confirmed, the report, along with Reynold’s tweet, and that leaked Deadpool test footage we saw earlier in the year, make it incredibly likely that this is the real deal.