A large portion of my classmates were excited to attend my ten-year high school reunion to see old girlfriends or ex-football quarterbacks to see how fat they’ve gotten or how hot they might still be. Not me. I was desperate to track down a shy and slightly awkward kid with big tousled hair – way before Bieber made it cool – that most of my class might have no memory of at all. And for me, I didn’t want to reminisce with him about playing Magic in the cafeteria, or how he rocked the high school auditorium as Pontius Pilate in Jesus Christ Superstar. I didn’t want to hear about how he attended law school or what it was like cramming for the bar exam. No, I cared not a whit about any of that crap. All I wanted to talk to him about was Lord of the Rings Online. 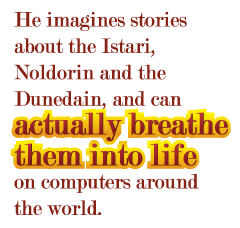 You see, Jeff Libby is a Content Designer at Turbine, one of the coolest jobs a fantasy geek like me could ever want. My old classmate Jeff writes quests in the style of J. R. R. Tolkien for millions of adoring fans. He imagines stories about the Istari, Noldorin and the Dunedain, and can actually breathe them into life on computers around the world. His daily tasks are absolutely magical to me and I wanted to find out how he got the job, what it was like to work at Turbine, and, perhaps most importantly, which orc I needed to kill to get a job just like it.

Growing up, Jeff noticed that he thought about games much more than his peers did. “I just love talking about games. Hearing about people’s experiences with games and debating the pros and cons of design decisions has always been one of my very favorite pastimes. I was always the kid in the neighborhood who wanted the group of friends to go inside and play NES, but I often didn’t care if I even had a controller. I wanted everyone else to play, and to enjoy the experience as much as I did.”

That quality, the love of discussing games and dissecting what makes them work, was a huge bonus when he applied to work at Turbine, but working on games wasn’t Jeff’s chosen career path by any stretch. After high school, he went off to college and eventually studied law before settling in the Boston area. So how did he go from a fairly pedestrian lifestyle as a soon-to-be lawyer to writing content for Lord of the Rings Online?

“As with a lot of things in life, there was a good deal of luck involved,” Jeff said. “After passing the Bar and striding onto the streets of Boston in search of work, it became quickly apparent that there were hundreds of other eager young lawyers in my exact circumstances, looking for exactly the same positions.” One of the only positions available to an out-of-work lawyer was at Houghton Mifflin, the American publisher of all of Tolkien’s books. Jeff was already a fan of Tolkien’s work (he’s read Lord of the Rings every year since third grade), but he now devoured the wealth of source material found in The Silmarillion, Unfinished Tales, and all of Tolkien’s notes published by his son Christopher.

“The work was fine,” Jeff recalled of his time at Houghton Mifflin. “Only in hindsight can I tell that I was biding my time for something else to come along.”

That something else was a brief mention by his wife after she had glanced at the Turbine website. “As it happened, there was an opening for an Associate Content Designer on Lord of the Rings Online, a game that I had heard was in development years before but hadn’t followed very closely. But now it was brought to my attention that not only was there a game developer nearly in my backyard, but they were making a Lord of the Rings game! And they needed help to make it! From my wannabe-game-designer perspective, it was a perfect match.” He knew he had only a hobbit’s chance of landing the job, but Jeff pursued it like Gollum chased the One Ring.

To apply, Jeff had to submit a writing sample. “I wrote a thing called ‘Concerning Football,’ which was supposed to be the account of a hobbit attempting to describe American Football to his bemused audience. It was stupid, but it must have come across as being Middle-earthy enough in tone,” he remembered. After passing the first hurdle, Jeff was asked to design a quest and a dungeon space for it to occupy. “I agonized over both of them for the week provided, and was still up at 2 AM the night before they were due.” Apparently, Turbine was impressed and asked him to come in for an interview.

“We covered all sorts of topics, like favorite MMOs, familiarity with LotR, and design theories,” Jeff said. Then he was asked what his favorite super-power might be. “My answer ‘The ability to freeze time!’ was not, apparently, the best choice, as I neglected to grant myself the power to ‘unfreeze’ time, and would therefore spend an eternity in an unchanging nightmare.”

Having hit the streets of Boston trying to drum up lawyer jobs probably didn’t prepare him for hard-hitting, provocative critiques on his superpowers, something that Jeff immediately appreciated. “Any interview where this could be pointed out? Coolest interview ever!”

The familiarity that Jeff had developed as he devoured the backstory of Middle-earth during his time at Houghton-Mifflin really came in handy. He was no casual fan of Tolkien, gleaning details from a late-night booze-filled viewing of the theatrical version of Peter Jackson’s Return of the King. No, Jeff had a lawyer’s level of detail he could display to the developers at Turbine. “Encyclopedic knowledge isn’t really necessary, but I think that it sure puts major points in the plus column,” Jeff said. Knowing how and why Jackson’s script deviated from the books was essential. “‘My favorite part in the book is the part where Arwen rides with Frodo to the Ford!’ or ‘I just love in the book when Eomer rides down the hill with Gandalf!’ are some clear warning signs. Being able to talk about the differences in an intelligent way helps, too.”

Without intention, Jeff’s life experience to that date had accumulated the perfect mix of qualities for a content designer at Turbine. Jeff was offered the position, but it took quite a while for the reality of having his dream job to sink in. “I didn’t really believe it. I thought it was a trick. It was actually several months before I was convinced I wasn’t still interviewing.”

Then he had to get to the actual work of the job, a daunting task considering that many of his now-peers had years of videogame experience under their belts. The first day was a kaleidoscope of amazement for a newly-minted game designer: “Being given a disc with the current state of the game on it and told to play through it and take notes; walking past an artist’s desk and seeing a 3D model of the Watcher in the Water being worked on; getting into conversations with team members who’d worked on other games: Asheron’s Call! Thief: The Dark Project! Half-life! I met someone who had a locker in Black Mesa, for crying out loud!”

Jeff learned how to write his first quest by attending a review meeting of another’s work. “I attended a peer review of one of the quests there, where the player helps a Ranger named Candaith retake the summit of Weathertop. I would eventually make quests as complex, but on that first day and in those first few weeks, the word of the day was simple.” He had the right skills, talents, and knowledge to write great quests, but Jeff had to be trained on how to transform concepts into something a player could interact with. “I was paired up with a member of the team who would show me the quest-writing tools and the world-building suite, and teach me the process of taking an idea and transforming it into something in the game. It would take more than one day to learn the whole procedure, and I remember thinking I would never be able to keep it all straight.” 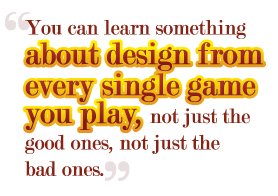 To start out, Jeff used the classic tools in an MMO quest designer’s repertoire. “Monster kill quests, item deliveries, these were my bread and butter of learning how to make content for LOTRO. I would graduate to making escort quests, complicated instances, and eventually become responsible for the Epic Storyline that runs through the entire game. But it all started with learning the basics.”

Having only worked at Turbine, Jeff is a little spoiled by what sounds like an awesome corporate culture at their offices in Needham, MA. “Turbine feels to me like what a games company should feel like: people playing computer games during lunch, running CCG tournaments and participating in online FPS leagues, getting excited about all the latest MMOs to come out, all the sort of things that make me as a gamer and as a games designer feel right at home.” Turbine doesn’t skimp on the amenities either. “We have an Entertainment Committee that plans events and parties, we have chili-cooking competitions, we have a Crystal Castles arcade machine in one of the break rooms.”

That’s not to say that Jeff doesn’t work his elven arse off. “It’s still a job, of course, and the key is to get all of your work done well and on time,” he said. “The number one most valuable trait for a game designer, not just at Turbine but I’m convinced anywhere, is the ability to work at a high level of quality and to a deadline. The second most valuable trait is enthusiasm about games and an ability to think about and discuss them. You can learn something about design from every single game you play, not just the good ones, not just the bad ones.”

No one would say that Jeff Libby was the most popular kid in our high school. His love of videogames put him on the fringes of what was “cool” and didn’t get him invited to many keggers. Even though he tried to fit in where he could – we were both on the same Parks & Rec basketball team in middle school – it wasn’t until he’d run the gauntlet of college and law school that he realized gaming could be lead to a satisfying professional life. And his job certainly has cachet for people like me. After being hired as an Associate Content Designer at Turbine before Lord of the Rings Online shipped in April 2007, Jeff is now crafting the “Epic” quests that lead the player through all of the content of an MMO with one of the most loyal populations on the market. For the millions of players of Lord of the Rings Online, Jeff Libby is the coolest guy in Middle-earth.

Although Greg Tito only played a lowly apostle in Jesus Christ Superstar, he did build the sets. That’s cool, right?

A New Breed of Player

Casual Gamers Are Better Than You