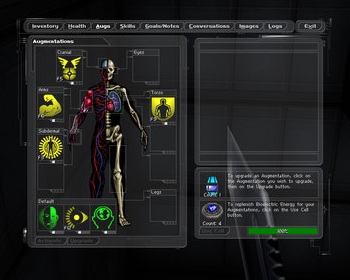 Deus Ex, the greatest videogame ever made, is now available on GOG! [Oh, and Hitman, too.]

Square Enix has arrived at Good Old Games and it’s brought a couple of serious heavyweight classics with it. First up is Hitman: Codename 47, the game that launched the famous stealth/murder franchise that’s still going strong today. Hitman is up for $5.99 and comes with four HD wallpapers and four avatars, not to mention all the hours of fun getting paid to kill people in all sorts of horrific ways. Great stuff!

And then there’s the big gun: Deus Ex: Game of the Year Edition, the original, the one everybody talks about and nobody believes came out of Ion Storm. At $9.99 it’s a little more expensive than most GOG titles, but this is Deus Ex, people – it’s the greatest videogame ever made. And along with the greatest videogame ever made, your ten bucks will also get you two HD wallpapers, the soundtrack, an avatar and a “newspaper handout,” which I assume is a digital version of the fake newspaper filled with background information that came with the original release.

Both these games came out in 2000, but you wouldn’t know it to look at their screenshots. The voice acting in Deus Ex is terrible too, the animations are stilted and choppy and the action bits were substandard even when it was new. Yet in spite of all that, it’s undeniably one of the most influential games ever made and remains very playable, even today. I can’t explain it, but I suspect that some very dark magic was somehow involved.

Deus Ex: Game of the Year Edition and Hitman: Codename 47 are both available now at GOG.com.