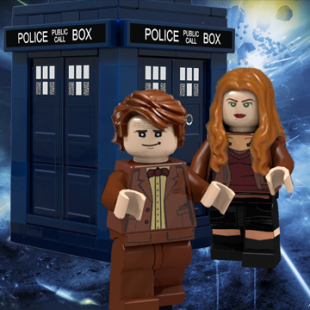 A Doctor Who-themed LEGO set recently earned the 10,000 Cuusoo supporters it needs to be considered by the company for official release.

A few weeks ago LEGO updated the License Conflicts and Resolutions page of its Cuusoo site, opening it up to Doctor Who-themed sets. The Whovians of the world, in turn, wasted no time in pitching and backing a Doctor Who project which, just recently, accumulated the 10,000 supporters it needs to receive official consideration from LEGO.

The proposed project, launched by Cuusoo member GlenBricker, would include 5 LEGO mini-figures, a K-9 unit, 3 Daleks and the Tardis and Tardis Console for potential build settings. While several characters have been mocked up, including a variety of different Doctors, the project will narrow down the mini-figures it includes based on the results of a poll.

Whatever characters are decided on, the project could, unfortunately, find itself unable to include every currently proposed piece. It’s possible that “complex licensing issues” could prevent a set from including Daleks. “Ideally this project will include Daleks,” said GlenBricker. “But I think we can all agree that we would rather have LEGO Doctor Who than no Doctor Who at all.”

While the rapid success of GlenBricker’s project is bound to be exciting for Doctor Who fans, it’s important to remember that it’s no guarantee that we’ll be seeing an official play set in the future. All that’s guaranteed right now is that the pitched set will be included in the next LEGO review, which should be coming in May. If the company determines the project to be viable then it might become an official LEGO product. Otherwise, it’s no-go. Obviously, we’ll be crossing our fingers that it makes the muster.