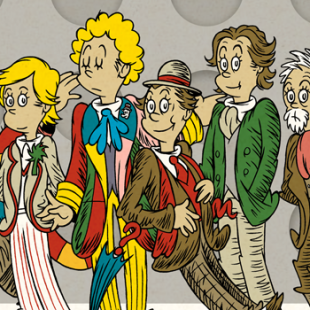 When you really think about it, Doctor Who almost sounds like something Dr. Seuss could have come up with. A guy who uses a magical police box to go on wacky adventures? Swap out the Tardis for a piano and you’re not too far off from Pontoffel Pock. Sadly, as the good doctor (Seuss, not Who) has passed away, we’ll never really know how he might have interpreted the character. Thankfully, there’s no lack for fan artists willing to give their own Seussian spin to everyone’s favorite Time Lord.

Take, for instance, DeviantArt member DrFaustusAu. The creator of a whole line of Seuss-themed pop culture mash-ups, he recently produced a series of images transforming thirteen versions of Doctor Who into Dr. Seuss characters, complete with their own miniature rhyming book. He’s also produced several posters based on his Seuss Time Lords, including one showcasing some Seuss-ified Daleks.

This isn’t the first time, of course, that we’ve touched on the work of DrFaustusAU. Back in May 2014, we showcased some of his earlier pictures re-imagining classic and famous horror franchises as Dr. Seuss books. Since then, he’s created several more illustrations giving the same treatment to other beloved franchises. We’ve included those and his Doctor Who images in a gallery below for your enjoyment. Give them a gander and let us know what you think.

Check out the Warcraft Movie Trailer Recreated in Fan Art