Sherlock Holmes: A Game of Shadows and Mission Impossible: Ghost Protocol have a lot in common right on the surface. They’re both big-budget PG-13 Hollywood action movies. They’re both sequels. They’re both star vehicles built around a popular lead actor playing a variation on his own well-known “stock persona” (Robert Downey Jr. as a snarky hard-living wiseass and Tom Cruise as Special Agent Handsome Q. Intensity.) They’re both adaptations – of 19th Century literature and 1970s television, respectively – that have increasingly less and less to do with their source material. And they’re both being released to U.S. theaters this weekend (Mission is bowing early in IMAX theaters only, while Sherlock is playing wide.)

But having seen the two of them, I was struck by how much else they had in common. Not just superficial circumstances of production, but eerily similar stories, irritatingly similar characters and depressingly similar reasons why they’re both not very good. Let’s have a look (obviously, this will include various spoilers) at which movie did the same basic thing better.

Mission Impossible: A brilliant professor has gone mad (or maybe was all along), and schemes to stage a series of terrorist bombings in order to trick the United States and Russia into a nuclear war. His endgame? He has calculated that worldwide cataclysm will happen anyway, and wants to direct the outbreak in a way that is beneficial to his own radical theories of societal evolution. A team of heroes, including two tough men with a shared past, must travel to exotic international locations in order to stop the plan.

Sherlock Holmes: A brilliant professor has gone mad (or maybe was all along) and schemes to stage a series of terrorist bombings in order to trick England, France and Germany into a World War. His endgame? He has calculated that the World War will happen anyway (the film is set a few decades before WWI breaks out for real) and wants to direct the outbreak in a way that is beneficial to his business interests (he owns a lot of artillery and medical supply companies.) A team of heroes, including two tough men with secret pasts, must travel to exotic international locations in order to stop the plan.

Winner: Neither. Holmes wastes the key villain of its franchise, Professor Moriarty, with a disappointingly dry turn by Jared Harris. The idea is that he’s supposed to be the “ice” to the film’s livewire version of Holmes, but the end result is that Robert Downey Jr. gobbles up all the energy leaving nothing for the villain to work with. Meanwhile, Mission is a film wholly concerned with setpiece demonstrations of made-up spy gadgetry and endless scenes of Tom Cruise running that can’t be bothered to invest its evil mastermind with even a hint of personality.

More problematically, both stories are shamefully well-worn: Holmes’ “let’s start WWI early!” steampunk-superweapon romp feels lifted wholesale from the movie version of League of Extraordinary Gentlemen, while the Mission team could have saved themselves from detective work by popping in a DVD of The Sum of All Fears, where a similarly generic villain was working almost an identical ploy.

MI:4 has a conceit to its movie spycraft that must’ve sounded very clever on paper: The gadgetry keeps malfunctioning. Framed as rogue operatives and cut off from their official support network, what gear the IMF team has to work with just keeps spazzing out at the least opportune moments – like when Tom Cruise tries to scale the world’s tallest skyscraper with a pair of magnetic gloves that keeping losing their grip.

Sherlock Holmes: “Thinking It Out.”

Remember that one pretty cool fight in the first movie where Holmes looks at his opponent, visualizes the precise combination of strikes and moves needed to beat him in analytical slow-motion, then snaps back to reality and does it for real? Not a bad bit, actually, serving the dual purpose of demonstrating the hero’s key attribute and explaining to skeptics and/or Sherlockian purists why a kung fu fighting Holmes made a certain amount of sense. In any case, hope you enjoyed it, because Part 2 does it again. And again. And again. 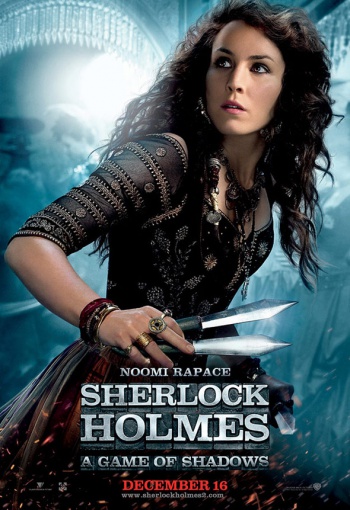 Winner: Mission, but only by a hair. The “tech doesn’t work” bit is refreshing and funny the first time it happens, but it keeps cropping up and quickly begins to feel like a cheap filmmaking crutch: Flip “Off” Switch To Increase Tension. On the other hand, Holmes’ constant re-use of the “Sherlock-Vision” bullet-time effect is flat-out interminable. The only thing worse than a long, tedious, movie-padding dull action scene is having to watch it twice.

Baffling Waste Of A Perfectly Good Actor From The Girl With The Dragon Tattoo:

(This is where the similarities get downright absurd)

Mission Impossible: Michael Nyqvist has the above-described Bond Villain role, which is thin to begin with and he’s given no opportunity to bring greater depth to. He’s bad, he’s crazy and he inexplicably gains previously unmentioned superhuman kung fu skills so the film can have a mano-a-mano showdown between him and Cruise.

Sherlock Holmes: Noomi Rapace, the original big screen Lisbeth Salander, makes her big Hollywood debut as a Gypsy fortune teller who gets pulled along on Holmes and Watson’s adventure for an extremely tenuous reason, then proceeds to have basically nothing to do otherwise. Both Holmes movies are trying to have it both ways – jokingly playing up the quasi-romantic chemistry between the two male leads while trotting out this or that female sidekick to make sure we know they’re kidding – but this time around it’s thuddingly obvious. She has zero reason to be here.

Winner: Holmes, sort of. Rapace at least gets to prove some mettle as a plausible female action lead, which Hollywood is now in somewhat short supply of. Nyqvist, on the other hand, has the same “fading into the scenery” problem he had in the Tattoo movies, where he tended to come off as that guy who was also there, next to the quirk-riddled, showier Salander character.

Mission Impossible: The main hero and the main villain – separated from a different, less-interesting fight involving their respective sidekicks – get into a brutal fistfight on a perilously high automated parking garage. Despite both men being ostensibly human, one a highly-trained spy, the other a professor, they both sprout Michael Meyers-level endurance and super strength in order to prolong the fight – which the villain attempts to end with a suicidal plunge.

Sherlock Holmes: The main hero and the main villain – separated from a different, less-interesting fight involving their respective sidekicks – get into a brutal fistfight on a perilously high balcony overlooking a Swiss waterfall. Despite both men being ostensibly human, one a detective trained in the martial arts, the other a professor (and onetime college boxing champ), they both summon up versions of Holmes’ previously displayed fight-predicting foresight in order to prolong the fight – which the hero attempts to end with a suicidal plunge.

Winner: Mission. The film isn’t very good, mostly thanks to a shallow screenplay with a story that even its paper-thin characters can’t pretend to care about, but its saving grace is that animation-directing demigod Brad Bird turns out to be a great director of live-action … er … action. The two middle-aged actors pounding away at each other like a pair of Terminators is an absurdly dumb sequence, but the staging is crisp, clean, free of mindless shaky-cam and makes great use of the automated-garage location.

By contrast, the fight scenes in Holmes are truly awful – unimaginative fistfights and shootouts drenched in every stylistic quirk and editing trick director Guy Ritchie can throw at them in a vain attempt to keep things watchable.