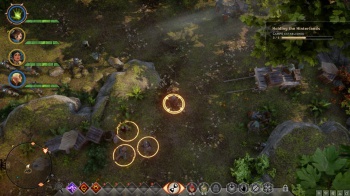 When PC gamers were first offered a glimpse of Dragon Age: Inquisition, we rejoiced the return of Dragon Age: Origins‘ tactical mode. Unfortunately, when we actually got the game in our hands, many PC gamers complained that the tactical mode was full of bugs, didn’t zoom out far enough, and had very shoddy controls. Bioware is aiming to address this issues with Patch 2, the game’s first post-release patch.

“Patch 2 is focused on stability, but does include numerous improvements and fixes across the board,” wrote Bioware in a blog post. The post mentions fixes to numerous PC control & UI issues, fixes to some hitching, improved Mantle performance, and graphical glitches.

“Patch 2 includes the first range of fixes towards addressing the feedback we’ve received on the PC controls; it cleans things up so you’ll see fewer problems with the current layout. This gives us a more stable base upon which to work. After Patch 2 goes out, our next priority is to improve the PC mouse/keyboard controls further. We’re investigating how to expand on PC usability and functionality to address specific requests from the community.”

Looking forward, Bioware promises that “We’ll be creating new features and content and adding them into your game over time because we love our DAI players. Multiplayer will also be receiving regular content updates.”

Good to see Bioware acknowledging and addressing the game’s PC issues, but it really should have sorted these out before launch.