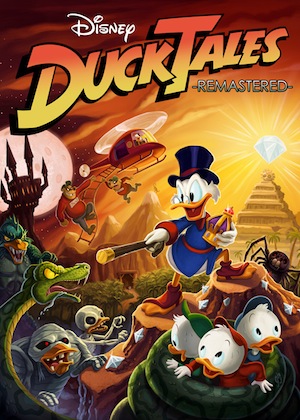 From Darkstalkers Resurrection to Dungeons & Dragons: Chronicles of Mystara, Capcom has been spearheading a radical nostalgia movement in videogames thus far in 2013, delighting the aging fanbase with classic retro titles remade for the current generation of gaming. Continuing this course, Capcom is now re-introducing gamers to yet another classic: 1989’s hit side-scroller DuckTales. DuckTales: Remastered puts you back in the shoes of Scrooge McDuck, the richest duck in the world, as he globetrots through exotic locales collecting even more treasures for his vault.

The story is simple: Scrooge McDuck finds a treasure map listing the location of several priceless artifacts scattered around the globe and beyond. Never being content with just being the wealthiest duck around, Scrooge makes it his mission to collect these new treasures, even at the expense of the well being of his family. It’s not the most noble of stories, admittedly, but it fits Scrooge’s character to a tee. That’s not to say that Scrooge is one of the bad guys, just that his unchecked ambition for ever greater wealth is something of a liability when it comes to the safety of his family. But this probably isn’t news to you. Anybody that eager to dive headfirst into a vault full of gold coins clearly has some insecurities to work out.

After discovering the treasure map and feeding it into Scrooge’s computer, you’ll get access to the mission hub, where you can choose which level to take on, and in what order. When you complete a level, your progress is saved, and the level is grayed out in that menu, preventing you from replaying it during this playthrough. The implication of this is that you have to get each level right the first time if you’re aiming for a high score or anything of that nature. It can be immensely frustrating when you realize that you missed a ton of treasure in the last level and you can’t go back to pick it up.

The gameplay is retro platforming at its finest. It’s not all running and jumping, though, as most of the time you’ll be bouncing around on your pogo-cane, since you can pogo safely off of many hazards, crush enemies mercilessly beneath your cane, and, of course, jump a bit higher to reach new areas of the map. There’s even an option for easy pogo-ing, allowing you to simply hold X to bounce, rather than having to press down and X. That might not sound like much, but rest assured, you’ll be really thankful this option is there, as pogo-ing around the level is significantly more difficult when it requires a directional input. While the controls on the whole were supremely tight and responsive, the standard pogo move seemed hit-or-miss for some reason. There’s not too much to say about the gameplay, as it is precisely what you expect it to be. You jump between platforms, bounce off enemy heads, and dodge hazards (or bounce off of them.) It’s just as enjoyable as you remember it, but it’s a lot harder than you might recall.

Players new to side-scrolling platformers might want to check out easy mode first, which gives you infinite lives and doubles your health bar. Playing on easy is never the most satisfying way to get through a game, but the frustration of having only three lives to beat some of the tougher levels is pretty severe. If you’re in a hurry to get through the story, or just want to frolic in a stress-free environment, easy is the way to go. If you’re looking for more of a challenge, then normal is where you’ll want to be. The game will still save your progress as you beat levels, but you won’t be able to continue indefinitely within a given area, as you’ll have limited lives. Hard mode only seems to remove the level map from the pause screen, which isn’t much of a detriment if you’ve played each level a couple of times already, so it might be worth trying for your second or third run.

DuckTales: Remastered doesn’t try to do anything new. What it does, however, it does with a sense of style that doesn’t spoil your childhood memories. Likewise, the updated graphics and interface don’t detract from the retro feel of the game. It still feels like you’re playing an NES game, but the easy pogo option, the character voices – some of the original voice actors from the animated series were actually tapped for this re-release – and the saved game system genuinely enhance the experience.

Bottom Line: This is a retro re-release at its finest. The game feels like its classic counterpart, but it has a number of improvements to make it more palatable to a modern gaming audience.

Recommendation: DuckTales: Remastered is a must-have game for any fan of retro titles or the DuckTales franchise in general. Plus, you can just leave it on the title screen and loop the 8-bit theme song indefinitely. Woo-oo!