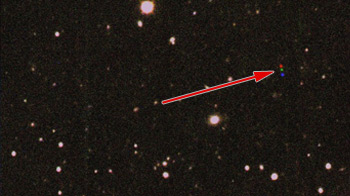 Astronomers have spotted a tiny, pinkish dwarf planet spinning around the edges of our solar system.

The outskirts of our solar system just got a little bigger. According to a group of scientists from the Gemini Observatory, a dwarf planet has been detected on the far side of Pluto.

The tiny ball is only about 280 miles across, and takes about 4,000 years to orbit the sun. Researchers haven’t been able to determine the planet’s composition, but speculate that it’s made of ice, given its pinkish hue.

Until very recently, scientists assumed that this region of space was vacant, but several discoveries suggest that a handful of minuscule planets live in the area. “We used to think there’s just not much out there,” said Chad Trujillo, one of the astronomers who made the discovery. “But it turns out there are some interesting things.”

Perhaps the most interesting thing about this discovery is the fact that it hints at an even larger planet in the area. While studying the dwarf planet’s orbital movement, researchers realized that it was responding to the gravity of a much larger object, up to 10 times the size of Earth.

“So we just need to find more of these objects to see really what’s happening,” said Scott Sheppard, of the Carnegie Institution for Science in Washington, D.C. “But it’s definitely a probable thing that there could be a very large object out there.”

Right now, the spinning ball of ice is known as 2012 VP113, but the team affectionately invokes the Vice President’s name on occasion. “For short we’ve just been calling it VP or sometimes we even just call it Biden,” Sheppard says.

Neil deGrasse Tyson, astronomy’s most famous face, commented on Dwarf Planet Biden on Facebook. “It’s dark out there,” Tyson says. “And to compound that fact, the stuff that orbit the Sun out there tends to be as black as the sidewall of a car tire. We should expect to find more and more objects as our telescopes and detectors get better and better.”