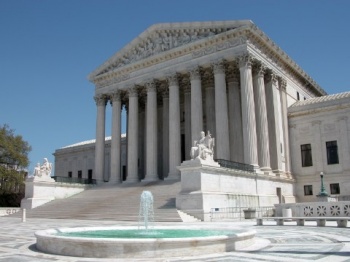 An upcoming Supreme Court case could subject second-hand sales to the approval of rights holders in the US.

The US’ first-sale doctrine essentially ensures a citizen’s right to resell their property by limiting the rights of copyright holders. The doctrine has come under legal scrutiny following a lawsuit brought against student, Supap Kirtsaeng, by textbook publisher, John Wiley & Sons.

Kirtsaeng, a Thai-born graduate studying in the US, was buying textbooks overseas and reselling them in the US via eBay, undercutting the inflated prices publishers often charge for course material. John Wiley & Sons sued Kirtsaeng and eventually won, with the appeal court limiting the first-sale doctrine “specifically and exclusively” to works made in territories in which the US Copyright Act applies and excluding “foreign-manufactured works.”

The lower court decision is being brought to the Supreme Court in the coming months. If upheld, it could have far-reaching effects on second-hand sales of, well, pretty much everything, including the already legally murky second hand gaming market. It could even affect library lending policies if a brief from the Library Copyright Alliance is to be believed.

The case is making a lot of businesses that facilitate reselling nervous, including online flea market operator, eBay. The company has launched a “grass roots” movement to defend the current first-sale doctrine, and has launched “eBay Main Street” to mobilize its merchants. The Association of American Publishers (AAP) and the Software and Information Industry Association have both filed in favor of the Appeals Court finding.

While the US court system has weakened consumer rights regarding used sales, the opposite seems to be happening in Europe. Earlier this year, the EU court ruled that customers are legally entitled to resell their digital games, regardless of what a title’s EULA may say. The ruling doesn’t mandate that publishers have to provide a way for gamers to do so, but it does mean a third party could legally provide that service. Unfortunately, no companies have stepped up to that wicket just yet.