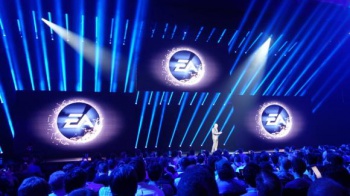 During its Q4 2014 earnings call, the publisher has announced that it will reveal six new games at this year’s E3, and where fans can watch its press conference live.

During its Q4 2014 earnings call yesterday, publisher EA has announced (transcribed by SeekingAlpha) that it plans “to unveil details on at least six new projects in development at EA” at this year’s E3. Possibly one of those will be DICE’s take on the Star Wars: Battlefront franchise which we’ll see an “update” on at the press conference. In the same call, EA CEO Andrew Wilson said that a “major new game” is to be released in Q3 2014 that will be developed on DICE’s Frostbite 3 engine. This, too, will be shown off at the publisher’s presser, but it’s not known whether this counts as part of the six mentioned previously. Looking at EA’s scheduled games that are set to come out later this year, the publisher has yet to name its shooter that will combat Activision’s Call of Duty franchise as it has done the past few years. Odds are, this “major new game” could possibly be the rumored “police-themed Battlefield” game that’s being developed by Dead Space makers, Visceral Games.

In a press release sent by EA, the publisher has also announced that it plans to host a live-stream of its press conference. According to the presser, “the company will showcase its commitment to delivering great player experiences with an exciting new lineup of games and services. It all begins on June 9, 2014 at EA’s annual E3 briefing, ‘EA World Premiere: E3 2014 Preview.'” Hosted by CEO Andrew Wilson, the event will take place at the Shrine Expo Hall in Los Angeles on Monday, June 9, at 12:00 p.m. PDT, and will be streamed online on EA’s official site, Spike TV, and EA’s Twitch channel.

Call of Duty: Ghosts is the Best-Selling Game on PS4 and Xbox One