Endless Space from Amplitude Studios turned out to be a fairly successful and popular 4X turn-based strategy game when it was released on Independence Day in 2012. The game offered a randomly generated galaxy with nine civilizations to choose from, and gave players the opportunity for multiplayer and mods as well. The game has gone on to several updates in the ensuing time, and continues to be popular.

So what does Amplitude do for an encore? Enter Endless Legend, a 4X strategy sim this time set in a fantasy world, and available through Steam. The game is currently in beta and allowing some players early access.

We had the chance to talk with Amplitude’s Narrative Director and Lead Writer Jeff Spock about the game, and what went the thought processes were to developing a successful followup to Endless Space.

The Escapist: What’s it like following up from a critically acclaimed game in Endless Space? Do you feel pressure to keep up the quality level? 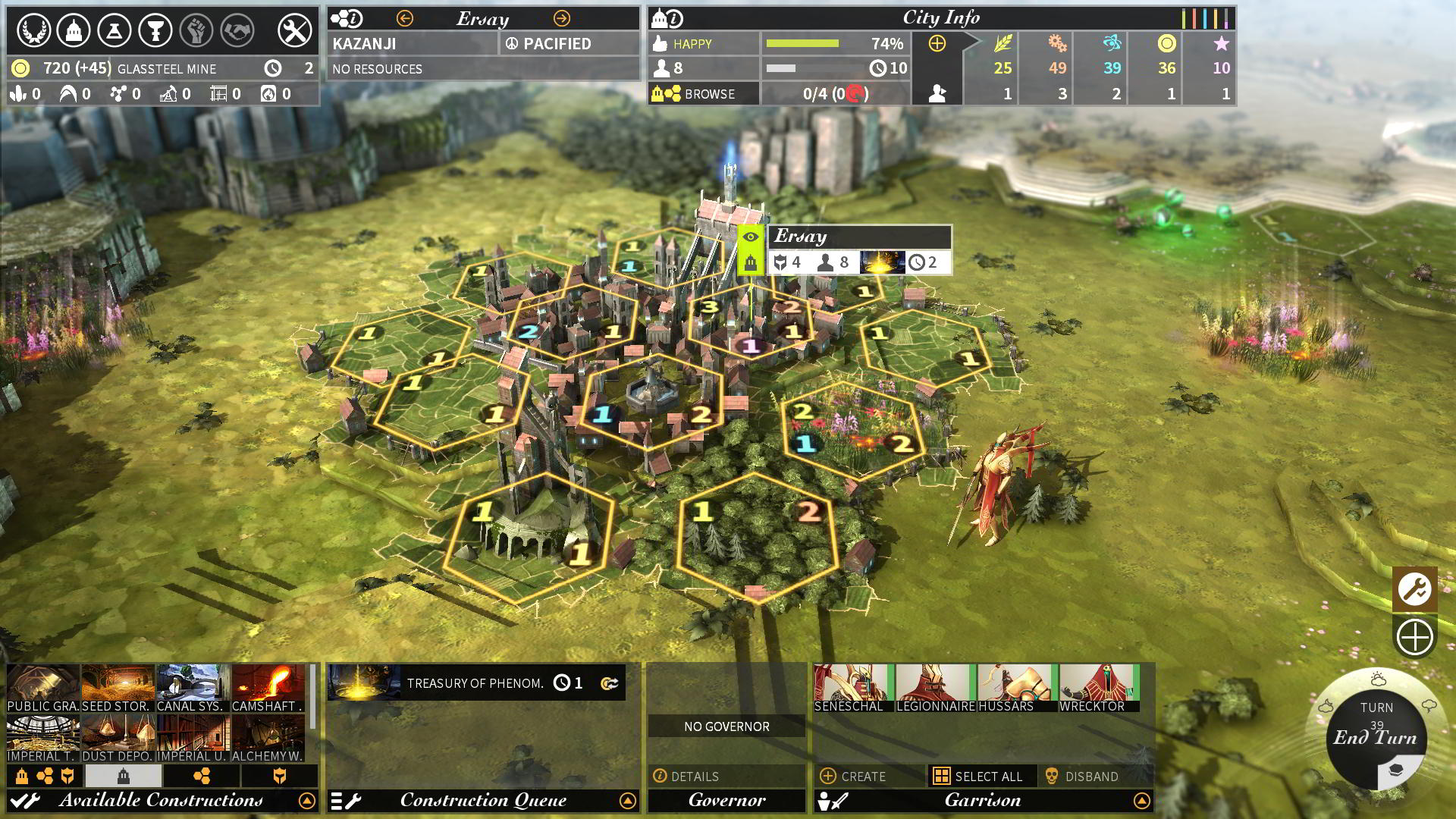 Jeff Spock: To an extent, yes. We know there are expectations out there, and there is some stress to fulfill them. But for Amplitude the overriding factor is the desire to make awesome, high-quality games. We don’t have an arbitrary deadline looming over us, forcing us to ship something that isn’t ready, and fortunately we still have some money so the company won’t close if Endless Legend takes a few more weeks than planned. We have the luxury of doing the game how we want it, and, being gamers to the core, what we want is a game that is rock-solid, intelligent, comprehensible, and fun. So that’s what we shoot for.

We figure that if it’s the best we can possibly do, we’ll take the reviews wherever they fall!

The Escapist: Endless Legend has a very unique and striking art style, coupled with a simple and clean UI. Can you talk a little about your inspirations for that? Why do your games look so damn GOOD?

Spock: Hey, man, we’re French. So, yeah, some of that’s a joke, but it’s still true that we come from a culture that cares very much about elegance, look, and style. France is a country that has great high technology and great art; video games is where those two influences went clubbing, got wasted together, and created mutant offspring like us. 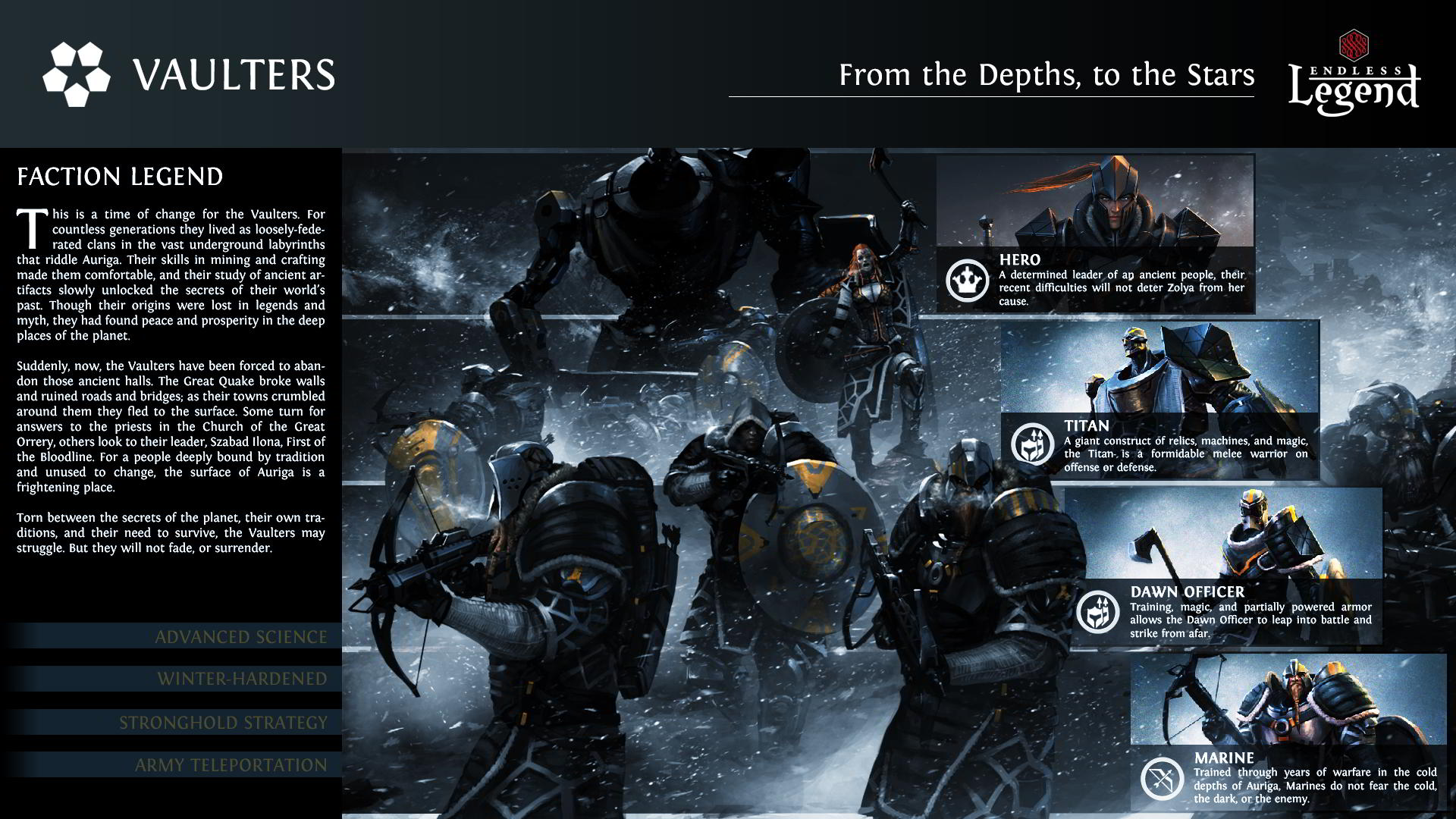 But traditionally, and in particular with space 4Xs, we felt that art and the UI were two things that could really be improved.

Too many of the ships (for Endless Space) and the units and landscapes (for Endless Legend) in older games looked the same – too generic, too copycat, too been-there- done-that. You could probably swap space ship designs from half a dozen space games and have no idea which one you were looking at. We wanted Endless Space to stand out, to look different, to be beautiful, to take the players’ imaginations someplace new. The same thing is definitely going on with the design and art in Endless Legend.

We do this very collaboratively. Our Art Director, Corinne Billon, started as a graphic designer, then went into animation, and ended up in games. She has an amazing repertoire of references, as does our COO and Creative Director, Romain de Waubert. We take the time to run ideas around the office so all the devs have a say, cull it down to the best few, and then decide. It can be a big, messy process, but for us it ensures that only the very coolest ideas get pulled together into the final product. Fortunately, they get pulled together by what is probably the most talented art team in the game industry. Okay, or almost. Whatever. There may be some bias in the sample there.

The other issue was that in older 4Xs too much of the game challenge was figuring out how to do what you wanted to do; the interface was developed almost as if it was another obstacle to executing your strategy. Our CEO and lead tech guy, Mathieu Girard, actually began his career as a user interface programmer before coming to the game industry, so there happens to be a lot of history and experience behind the GUI development. We also used some external consultants who are full of ideas of presentation and ergonomics. We really want the interfaces for Amplitude games to be beautiful, clean, and simple to use. It’s just a really high priority for the company. Interfaces should be instinctive and invisible – they should maintain and support immersion, not prevent it. 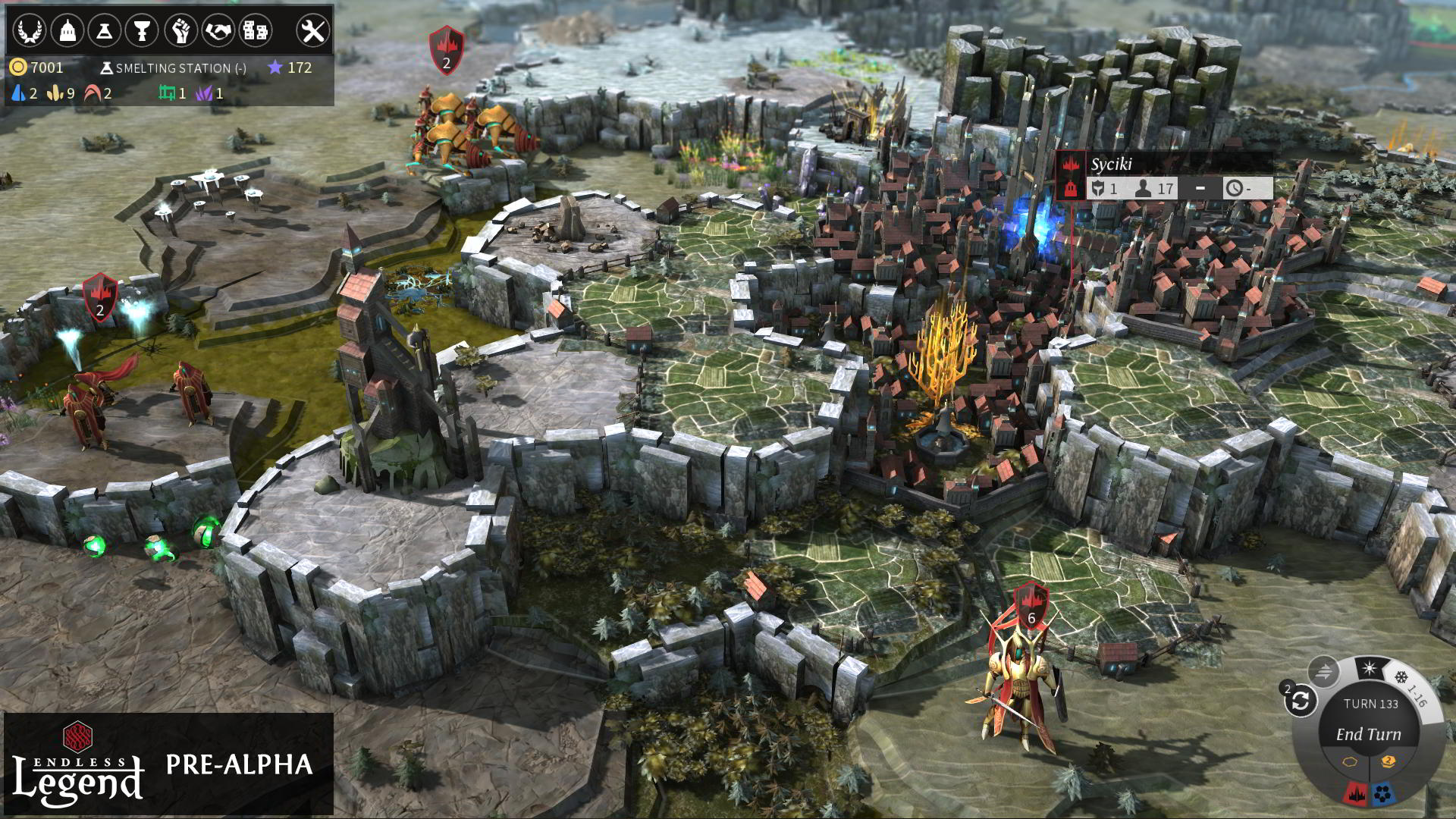 The Escapist: The lore of Endless Legend is very evocative without being shackled to Tolkien-esque fantasy. Who is the writer behind the game? How do you combine mechanics with story so elegantly?

Spock: This has always been a goal for the creative team. We want players to be able to relate and understand instantly, but without creating a generic copy. We want to have the high fantasy vibes and references, but without coughing up a high fantasy pablumfest. So we have Elves, but they’re the builders. We have knights, but they have elements of vampirism. The tropes are familiar, but they all have a twist. That’s what we try to do.

As the narrative director/lead writer, I draw on not only a decade of game writing but also a childhood spent watching way too much bad TV and reading way too many books. Even so the writing is also done collaboratively; I throw out ideas that we sort, eliminate, and refine until it’s something that everybody likes. Good ideas can come from progs, designers, artists, anywhere. But I get the final edit, wherein I apply the Red Pen of Merciless Coherence to keep everything hanging together.

As far as mechanics and story go, the advantage of a small studio is that the people who are generating the ideas and the content can just look up from the screen and yell questions. Our process is all about communication and iteration. It’s especially important for story, as we’ve all seen narrative that removes you from the game world and game worlds that appear incoherent with the game genre. We’re not trying to break new ground; we’re just trying to apply best narrative practices to a genre – 4X – that traditionally has mostly gone without that. It’s a challenge, but it’s also great fun. 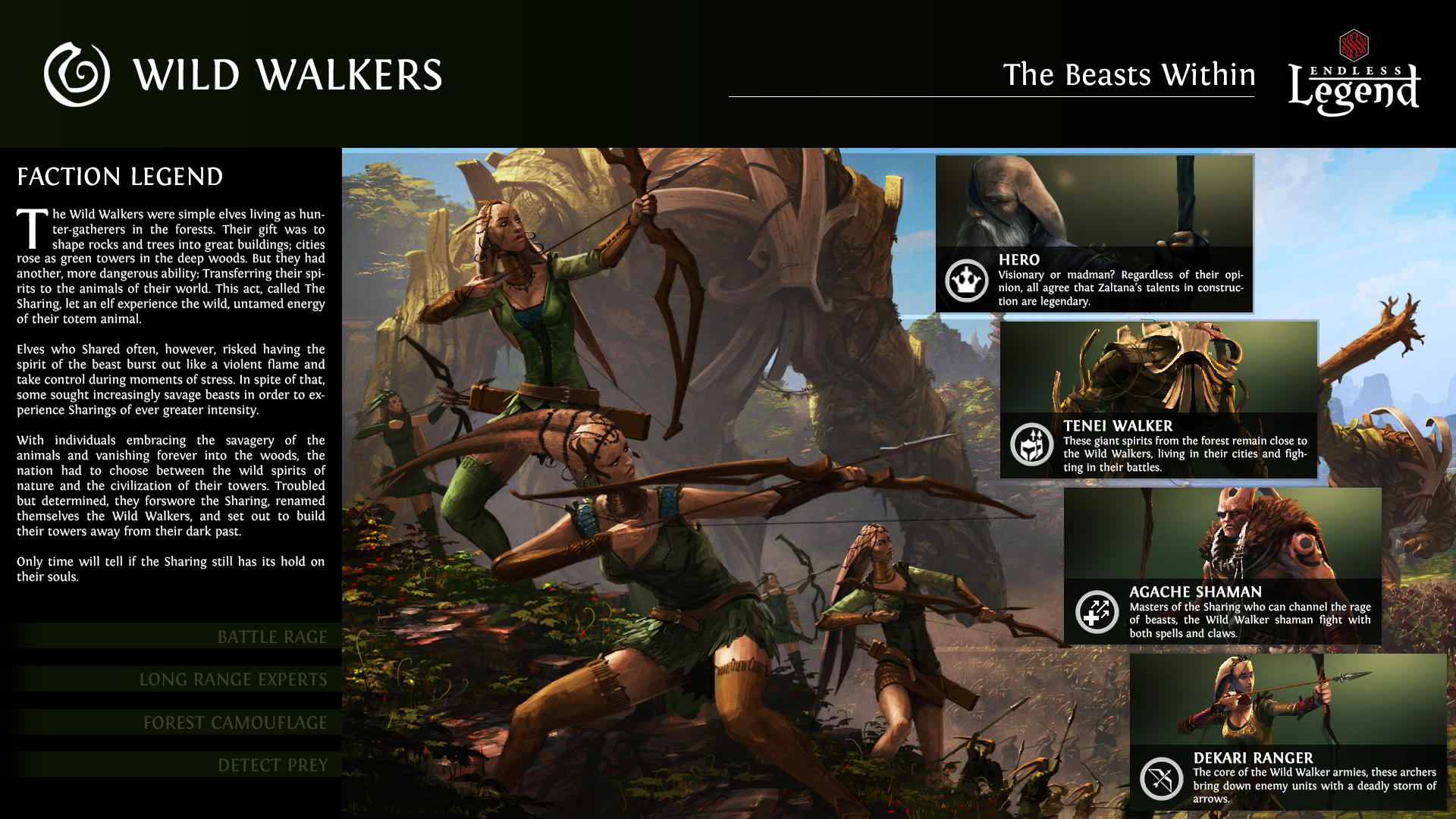 The Escapist: Specific nerd-question – your release trailer and some lore in the game seems to hint that the world in Endless Legend is connected to the galaxy of Endless Space? Is that true? Are the two games linked?

Spock: We had to make a very constraining decision at the start of Endless Legend development: Would the game be in the same universe as Endless Space? It’s a tough question, because even though Endless Space is more science fantasy (Star Wars, Dune) than science fiction (Star Trek, Aliens) it’s still hard to put out a game in that universe that is 100% magic.

Then we made it worse by deciding that our rogue-like, Dungeon of the Endless, would also be in the same universe as the other two and in fact provide a link between them. We won’t go into the details, and I still get a nervous tic when I hear discussions on the topic, but we think it all pulled together in a way that is fun for the players. With, of course, a lot of Easter eggs. 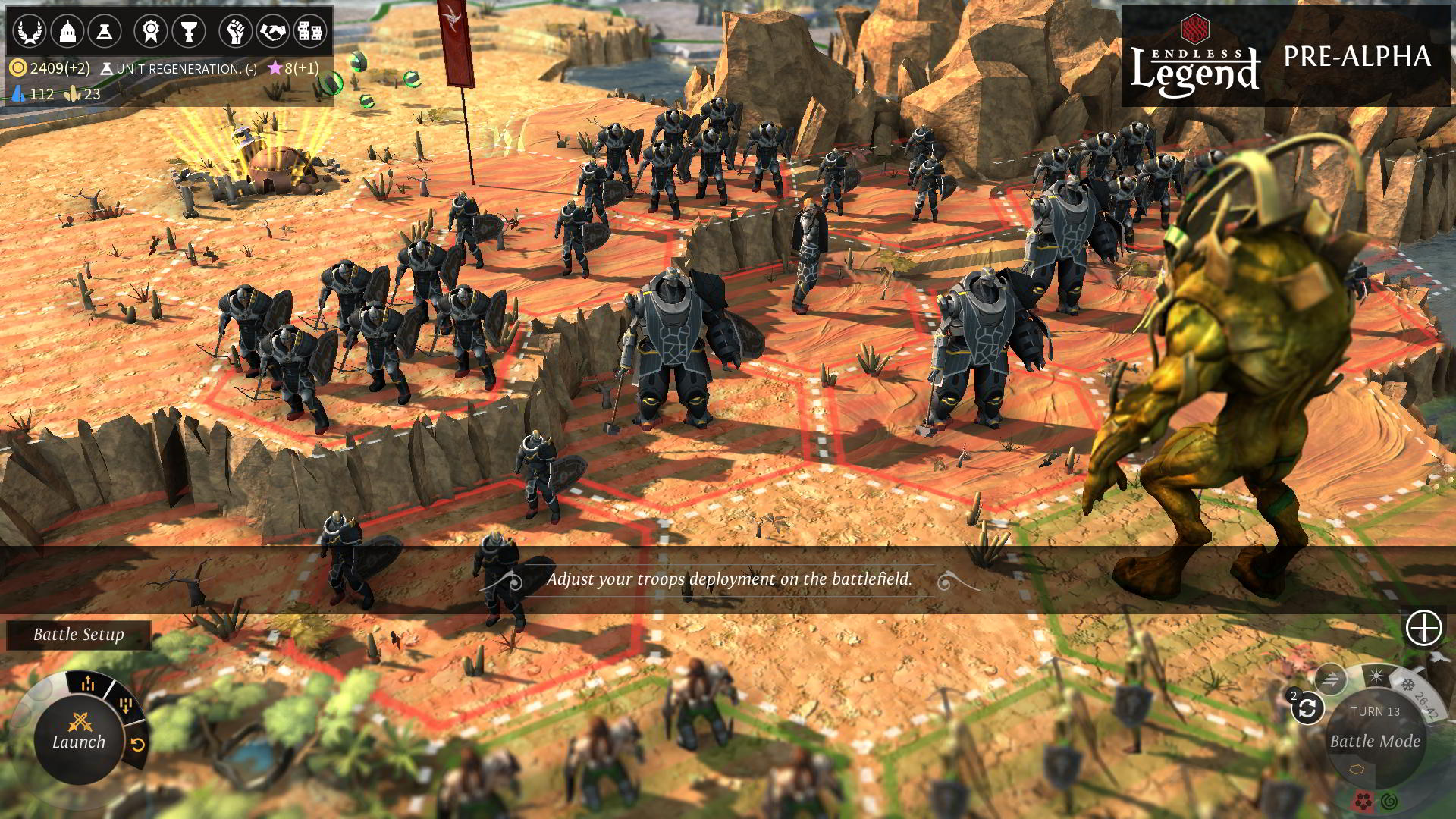 The Escapist: What is your impression of the Early Access program on Steam? Are you getting the feedback you wanted? What do you think about players’ complaints that they are being asked to pay money to beta-test?

Spock: The alpha of Endless Space was actually the first alpha version of a game ever to come out on Steam – it even predates their Early Access program. And yes, we wouldn’t have done it again if we didn’t think it provided a lot of value.

The problem we have in our chosen genre is the depth of gameplay and the complexity of balancing it. Even with 30 employees and an excellent QA partner, we’ll never get close to all the situations and test cases and balance issues that tens of thousands of players will see. The Early Access for us is critical to get all that right.

And besides, in all our gaming experience, there is nothing more heart-breaking than simply throwing a final release DVD over the wall and then finding out a week later that there were a couple of things that we didn’t think of or didn’t do right (*Cough* Dark Messiah *Cough*).

We don’t really view this process as beta-testing in the traditional bug-fix sense, and this goes back to the quality question at the beginning. There is nothing worse than asking people to pay money to fix your bugs. If that’s what they’re doing, the money should flow the other way! To us the whole point of the effort is gameplay feedback, not debugging. This means that an Early Access version has to be solid, so that the players are testing the game loop and the game balance and the game systems and not debugging.

For us it has been a great experience, and we’re incredibly happy with the comments and recommendations and ideas that we have been getting. We really can’t say enough great things about our community.