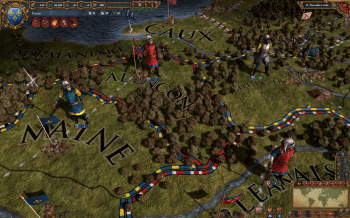 Have you ever seen what it’s like inside the New York Stock Exchange? On nearly every surface you’ll see numbers flashing all over the place beside esoteric codes, monitors showing talking heads with their own scrawl of numbers at the bottom of the screen, and people yelling and pointing and waving bits of paper in the air. You can’t be expected to walk into the NYSE and suddenly learn how a modern economy works. There are just so many variables in front of you that even with guidance it can be hard to figure out just what the hell is going on.

The developers of Europa Universalis 4 have a similar information overload problem. In EU, you take on the role of a country like France, England or something smaller like one of the German states and guide it through the Age of Imperialism, a period that runs roughly from the 1400s to the 1800s. As a player, you’re generally trying to make a bigger splash than your country might have made in actual history, or to create alternate histories like taking over Europe as a Muslim state, but because there’s no way to “win” the game, it’s easy to become overwhelmed. Getting players to stick around instead of glancing around the world map and puttering off to play a game that’s easier to pick up is a real challenge.

Even to someone interested in grand strategy games and the freedom of playing in an incredibly detailed historical sandbox, EU can feel alienating. You often just don’t know if what you’re doing is helping your nation or hurting it. There are wikis written by fans of the series to dissect the best strategies and trial-and-error experimentation is possible, but simple effective moves should be apparent from playing the game, not reading Gamefaqs. I sat down with Paradox Development Studios last week to get my hands on the upcoming Europa Universalis 4 and asked them point blank how they intended to elevate the series beyond its loyal but modest audience.

The good news is Paradox recognizes the problem and is going to spend the next year fine-tuning exactly what information you need to make your decisions as intelligently as possible. “There is a lot of stuff going on in Europa Universalis. And if you go back and look at our earlier games, it can feel like too much. It feels more complicated than it has to be,” admitted Thomas Johansson, the project lead for the next iteration of the series due out in September 2013. He said the game’s features are basically complete as the code enters alpha stage soon, and the rest of the development time will be spent improving the accessibility.

“We’re actually trying to look at the features and the interface, and ask, ‘What do you need to make decisions?'” Johansson said. He showed me an example of a feature that was added in one of EU3‘s expansion that’s been revised for EU4, dealing with rebels. In the rebel tab – there are a lot of tabs – there’s many variables showing how likely it is for a rebel faction to grow within your nation. Johansson is playing the country of Aragon, and the island of Sardinia might break away from his sovereignty at some point unless you increase your Stability stat or you accept their demands. “Even if you don’t figure out all the values, you can go into the new interface and click the button that says ‘Handle the Rebels.’ You’ll realize if you boost the stability that will help with this problem,” Johansson said. “We want to keep the underlying complexity, but we want to also help new players get into the game.”

One way to cut through all the difficulty might be to make sure the game systems are as intuitive as possible, such as EU4‘s newly revamped trade system which feels much more like a model of real world economies. The map of the world is scattered with trade nodes and goods flow along paths from their origin to the wealthy nations that can pay for them. For example, at the start of the game in 1444 AD, the node near Alexandria is especially important because that’s where all of the spices and ivory from India and the Far East get into Europe. By moving your naval fleets and merchant envoys to that node, you can change the direction of the flow to end in your nation, filling your coffers instead of your opponent’s. As the history of the game progresses and a naval route around Africa is discovered, the node in Alexandria might become less important as trade is diverted around the Cape of Good Hope instead of up the Red Sea. For a fan of history, it’s a really interesting way to represent how early trade rewarded the exploration of naval powers like the Portuguese.

Monarch points are another way in which EU4 feels simpler than previous versions. Your nation’s ruler has a set level of stats that will gain specific numbers of points as the game clock ticks forward, and you can spend these on National Ideas that further your nation’s ability to explore new territory or rule the provinces you currently own. In previous games, the National Ideas were tied to the technology tree much more closely and the way research worked needed complex mathematical proofs to explain. “There’s no investing in some numbers that need to be calculated, you’ve got the points and you got them for a reason you can understand,” Johansson said. “We hope that will make it easier.”

The other half of the information overload conundrum is teaching players how to play the game effectively. In a game where you can do anything – you can choose to play as any one of 260 nations and find success through trade, exploration or, of course, conquest – EU has a difficult time teaching how to use its game systems in order to succeed. The tutorials can teach you what an envoy is – in EU4 they are fixed numbers of units you can send to deal with one task like missionaries proselytizing your religion – but right now the game doesn’t always do well to explain when’s the best time to use one. Here’s where the grand scale of EU can work against its accessibility. How do you guide your players into making choices when there are so many options to choose from?

“One answer to this is to work on the storyline,” Johansson said. “We have a priority list of the most important countries. We can give individual Ideas and events to those countries which will give them a storyline.” At the start of the game, Johansson said he’s discussed with his team the possibility of presenting this list of countries, and showing the player which one would be good as a military power or one that gains success through trading. Adding some narrative framework would certainly help – that’s how many RTS games teach you how to play by slowly introducing units or concepts by telling an increasingly complex story. With a game that’s all about playing in the sandbox, Johansson is reluctant to lock you out of choices early on in a game. He doesn’t think it’s fun to artificially restrict you from taking actions, so he has to come up with another way to let the player progress. Johansson hasn’t promised that any one system of a tutorial, a storyline or a well-designed hint system will make it into to Europa Unversalis 4, but he’s confident his team will find a way to make it easier for new players to pick up and play.

“We recognize the problem, and I think we have the time and the tools to do something about it this time around,” Johansson said.