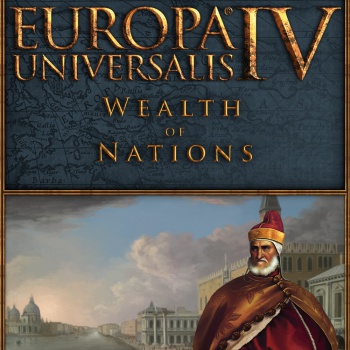 Use your economic strategy to crush history in EUIV.

The last expansion to the empire management grand strategy game EU4 was called Conquest of Paradise and it changed the world. No, really, for a game that can focus on exploration, knowing what the “New World” looked like was less fun than sending your ships into the unknown. Randomizing the map west of Europe was a big feature that vastly changed your strategy, and the release of Conquest of Paradise last month was huge for Thomas Johansson – the lead designer on EU4 – and the rest of the team. In contrast, Wealth of Nations will be a smaller expansion full of tiny features and tweaks that will improve the trade systems Europa Universalis IV. Wealth of Nations is set for release in Spring 2014.

Johansson’s trade system was a big departure from the series previous iterations. In the new system, there are abstracted trade nodes set up around the world map in fixed locations. Players manipulated trade by sending merchants or ships to exert pressure on the node and move wealth to your country. While the system was cool to observe and change, players started to run up against certain weird variables that Johansson aims to fix with Wealth of Nations.

“The Polish player would almost always conquer the Teutonic Order first and move their capital,” Johansson explained. “But in Wealth of Nations, you’ll be able to set a trade capital to earn the most money from the Baltic Sea trade node while keeping your political capital in Krakow.”

Trade capitals are a small feature, sure, but they will do a lot to enhance the historic feel of the game – that’s what EU is about. Also true to history, you’ll be able to use privateers to disrupt the trade of your rivals. These won’t be new units to build, but the light ship category will have a “send privateers” mission available similar to how “protect trade” works now. Once selected these ships won’t divert any trade income back to you – they are pirates after all – but will instead sluice income away from the trade node at a greater multiplier.

Of course, using privateers will give your enemies cause to declare war against you – the trade war “casus belli” or “CB” as Johansson calls it and the results of trade wars will also be vastly different in Wealth of Nations. In EU4 vanilla, sending trade power to the victor of war had a five year time limit, but the expansion will make that concession permanent until cancelled or another trade war is fought. That one tweak alone will vastly change the strategies of nations focused on dominating trade because a defeat could cripple you for a very long time.

Trade companies are another new feature, but Johansson admitted the exact details are still in flux. You will get a random event that will trigger the formation of a trade company – the British East India Company was a common example – and you’ll be able to designate the trade nodes that company will have jurisdiction over. Once you take over a certain amount of trade in that region, you’ll be rewarded with a merchant – a huge boost.

The details are all subject to change, as I said, but the implication is clear that Johansson wants to revise the trade system in EU4. I got the impression from early previews and conversations with him that successfully modeling a fun trade system was a large goal of his for EU4, and it was largely a success. Now with Wealth of Nations, Johansson has the chance to make it even more true to the history of Europa Universalis.

Look for Wealth of Nations on Steam in April or March 2014. It likely won’t cost as much as Conquest of Paradise, so it will be an easy way to upgrade your game without too much investment.