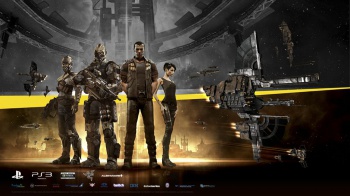 When you think about game development what places come to mind? Los Angeles, perhaps even Montreal or Austin? These are areas of the world that through tax incentives, local education or happenstance have cultured communities of game development. Which makes the story of how EVE Online came to be out of Reykjavik, Iceland, a country which until recently has had an economy primarily based on fishing, all the more interesting. In a market full of flash in the pan MMOs looking to capitalize on the successes of other games, today marks EVE Online‘s tenth year of service. This is also EVE Online tenth year of growth, the only game of its kind to avoid the peak, plateau and slow decline that’s claimed even much more popular, at the time, titles. For CCP Games this was all about trying something that no one else had and creating a world that was a living and breathing sandbox for players instead of being bottlenecked by what content the creators could produce. A world with meaning where loss and betrayal were as important as a player’s rise to power or the social connections they made along the way.

Every story has to have a beginning though, and for EVE Online and CCP Games that started back in 1997. However, EVE actually wasn’t the first game that CCP developed, it was instead a boardgame. Hættuspil or “Danger Game” was designed and created as a means to help fund creation of EVE Online. For a game that was never released out of Iceland, it sold very well, and many of the developers hinted that some of the early ideas of players interactions, especially PvP, found in EVE Online can be seen in the game. Danger Game will actually be getting its first English printing as part of EVE The Second Decade: Collector’s Edition, with even the comedian who crossed dressed as the granny reprising his role. Which is pretty funny considering that, no joke, he’s currently the mayor of Reykjavik.

The first few years of EVE‘s infancy were spent building the development team, giving shape to the game, fleshing out the early playables and even releasing some of the first screenshots. But despite everyone’s committed efforts, the game was actually proving to be a tough sell to publishers. With everything from “these are not real-time graphics” to “one of the worst interactive experiences I’ve ever had” being just a few of the responses. By 2002 the team was at full strength, and a decision to postpone the launch for 6 months based on feedback from the beta was made, despite the company being out of money at this point. However, EVE Online did finally find a publisher with Simon & Schuster Interactive, SSI, and was released in May of 2003, and then SSI promptly shut down its doors a few months later. This left the fledgling MMO with no means to continue growing its playerbase.

Now EVE Online had already weathered a number of stumbling blocks that would have spelled disaster for any other projects. So a decision had to be made in 2004, did CCP give up and take what they learned into a new game or find a solution for continuing to support EVE Online? Ultimately it was decided that EVE was still something unique in the gaming space based on the connections players could make in and through the world, so the company bought the rights back from SSI, began distributing the game digitally and started to release expansions. Or in the worlds of CEO Hilmar Petursson, “expansions will continue until morale improves.” To date, players have logged an impressive 107,585,605,903 minutes in EVE Online, which is a bit over 200,000 years, and in 2013, the game reached over 500,000 subscribers, with the average player clocking in around 16 hours per week or around 2 hours a day.

But what is it that really captures players to EVE Online? Every other MMO to date has gone through the same cycle of rapid growth, a plateauing of the subscription base and then the eventual slow decline until the developers can no longer keep the lights on. CCP believes it’s all a matter of creating a virtual world that’s more meaningful than “just a game”, relying on the sandbox instead of the theme park and maximizing player’s interactions with each other. This is accomplished through methods like having all the players in EVE Online connect to a single shard and single universe. Another MMO might boast millions of subscribers, but those millions are subdivided into hundreds of servers, factions and zones. So at any one time you’re only ever playing with a tiny fraction of total population. Compare this to say the battle of Asakai, a recent fleet battle where nearly 3,000 players participated. This wasn’t some raid dungeon or scripted encounter, a player piloting a massive Titan-class ship simply jumped to the wrong system on accident and the whole fight happened because of this one action. Other corporations and alliances quickly jumped on the opportunity to destroy such a valuable vessel, while the pilot’s own allies scrambled to defend it, and a massive fleet battle ensued. Once the dust settled, all those ships don’t simply respawn, they must be rebuilt piece by piece by players.

It’s these experiences that really cement players to EVE and every player, and developer, has their story. It could be accidentally losing the ship that your friend lent you, leading you to frantically mine in order to replace it since you legitimately feel bad about it. Maybe it’s roaming around in low security space as a pirate and spotting a ship to pounce on along with another pirate, and simply knowing “the pirate code” means you’ll help each other destroy the third ship together but then all bets are off between you two. Or that time where an alliance feigned neutrality in a conflict, all while supplying one side with resources. It might be your tiny corporation harrying another that thought you’d be easy prey. It might even be the straining relationship of the game and real life as you’re mid-battle with your buddies and then hear the baby cry. EVE is a game where the patient are rewarded, because hours of tedium can be paid off for a few minutes of real tension, wonder or excitement that you’ll not get in any other game. This is progenitor of the True Stories event that is currently running, where players can submit and vote on their best tales. Some of these stories will even be used as a basis for a comic book and tv series.

The theme for Fanfest and EVE was “The Second Decade”, and so much as it was a celebration and look back on what the EVE universe was it is also a look forward. On the Janurary 22nd the Dust universe and EVE universe officially became one with the connection to the same server, and later this month on May 14th, Dust 514 will leave beta and launch officially. In the upcoming Uprising build of the game, Dust mercenaries will begin to be able to conquer planets and set up structures in the districts. Further down the line, they will be expanding on all the equipment to fill in all the racial variants for each slot, much like EVE, and continually dialing up the interactions between the two games that share the same universe. Space elevators will ferry supplies from the surface into space where player controlled war barges can move Dust clones to their next fight. There may even be boarding parties of Dust players to contend with much further in the future.

For EVE on the near horizon is the Odyssey patch, which aims to get back to the wonder and splendor of space exploration. One of those aspects is ships, rather than simply adding more, CCP is instead going through what’s been lovingly referred to as the “tiericide imitative.” Instead of having a bunch of classes of ships where there’s clearly a superior among them, the focus will be instead to balance ships into distinctive and purposeful roles. An unused frigate that was clearly worse as a combat vessel to its higher tier cousins will find new life as say, a dedicated disruption boat that fools with enemy sensors and targeting. With what’s already been implemented, there’s been a huge uptick is usage of what were previously derelict ship lines. Much of this is in line with the sentiment and tone of Fanfest 2012, with a shift in focus away from Jesus features, like the infamous Incarna patch which moved towards player characters and real money transactions, back towards blowing up internet spaceships. The Odyssey patch will also change how and where you move about the universe. Exiting a station will trigger a new scanner overlay to help point you in the direction of new exploration opportunities, and jump gates feature a new transition to seamlessly move between systems without seeing anything that looks like a loading screen. The Odyssey expansion is set to launch on June 4th of this year.

As Fanfest 2013 and the first decade of EVE Online drew to a close, there was also a look at what’s just past the horizon. CCP is in the process of refining new ways to creating its expansions. Starting with an identifiable science fiction theme, seeing how it applies to the solo and group players and to the enablers and instigators, the four quadrants of players that CCP breaks the game roughly in. The next themes for EVE will be about space colonization, building structures, destroying them, the rise of the EVE pilots in society, taking over what the empires used to have control of, flying your own colors and a final hint of constructing new stargates to unknown places.

EVE Online has certainly carved an interesting niche for itself in the MMO genre, and it stands as a testament that practices of creating a game for a core group of users, crafting an open sandbox instead of linear questing and supporting your game for years can lead to success. CCP is setting up the EVE universe to go on for another decade.