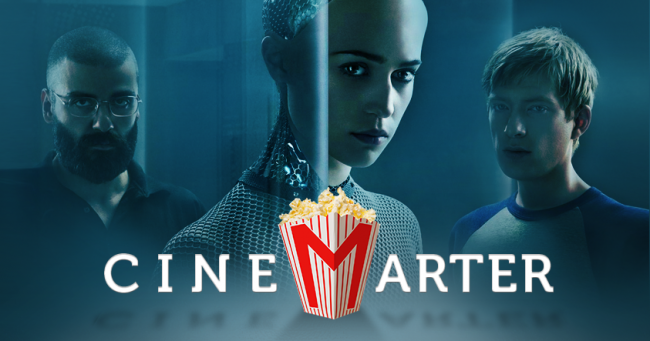 If you don’t immediately recognize the name “Alex Garland,” you’re not alone. Screenwriters usually don’t get recognized unless they’re Aaron Sorkin or something. Garland, if you don’t know, wrote the screenplays for 28 Days Later, Never Let Me Go, Dredd, and Sunshine. Videogame players might recognize him for co-writing the story to Enslaved: Odyssey to the West. If you don’t know who he is, now is the time to get acquainted with his work. He makes his directorial debut with Ex Machina, immediately establishing himself as a director to watch.

We don’t get smart, thrilling science fiction movies particularly often. Ex Machina is one of these. It starts off with a fairly simple premise, builds an incredible sense of atmosphere, and then ends perfectly. It makes us think both while it’s playing and after it’s concluded. I took several days after watching Ex Machina in hopes that I would find something I disliked, but I couldn’t find anything. It’s about as close to a perfect movie as one can get.

The story is pretty basic, at least at the beginning. A computer programmer, Caleb (Domhnall Gleeson), wins a contest to spend a week at the house of his company’s reclusive CEO, Nathan (Oscar Isaac). Upon arriving, Nathan reveals that Caleb is here to perform a Turing test on an A.I. he has created. Caleb will test the A.I., named “Ava” (Alicia Vikander), and try to determine if he’d be able to tell that it wasn’t a human. But, soon enough, Ava reveals that Nathan may not be telling him the whole truth. This idea is introduced early and allowed to fester; it isn’t hammered home until later. Ava and Caleb grow close together, too.

You can probably see, at least in part, where this is going. Caleb is torn between his human brethren and Ava. Whether Ava has consciousness comes into focus. The concept of identity is questioned. And those questions only serve as the beginning of the thought-provoking ideas the film has you contemplate. By the end of Ex Machina, you’re exhausted, mentally, because it begs you to think about it more than the vast majority of movies you watch. You’re not conditioned for a movie like Ex Machina, and as a result it feels special.

Ex Machina is a modern sci-fi masterpiece, and it’s something that I want to see again as soon as possible.

Ex Machina, though, isn’t just smart. It’s also thrilling and incredibly stylish. Part of its success comes from the set design and the location at which it was filmed. Nathan’s home, which in real life is the Juvet Hotel in Norway, is gorgeous, and provides us with a unique place in which to set a film. It looks so futuristic that you wonder how much the filmmakers actually had to change. It’s shot gorgeously, too, using this location to full effect. It’s also surprisingly funny. Tack on an impressive building of atmosphere, and you’ve got a movie that engages all of your senses and also leaves you thinking about it for days to come.

Another aspect to its success is Ava, who is created with amazing special effects to become an android. Alicia Vikander plays Ava with a coolness, but also with a human-like – at times, when appropriate – vulnerability and curiosity. It’s the type of performance that, if it took place in Blade Runner and if Ava was wearing clothes, you’d struggle to figure out whether or not Ava is a replicant. You wouldn’t know, and that’s a testament to her performance. It’s the perfect performance for someone who, herself, is effectively the subject of the Turing test. Oscar Isaac demonstrates his charm as an unconventional CEO who may or may not have both a drinking problem and a god complex. Domhnall Gleeson winds up being perfect as the lead, although for reasons that only become clear after the plot fully unravels.

The plot does unravel, by the way. There are several twists and multiple moments where you think “did they just do that?” If you think you’ve got it all figured out, you’re probably wrong. Maybe Nathan is doing more than just testing Ava. Maybe Ava has no genuine attraction to Caleb; he’s just a means to an end. To what end? Who knows? Perhaps they really are in love. Maybe Caleb is just another one of Nathan’s creations. Maybe everyone’s an android. And what’s up with Nathan’s housekeeper, Kyoko (Sonoya Mizuno)? There are a bunch of plot-based questions that you will want the answers to – in addition to the thematic ideas that the film brings up.

It’s a rare film that leaves me as excited as Ex Machina did. It’s even rarer that I won’t find any issues with it. Both of these two things occurred here. Ex Machina is a modern sci-fi masterpiece, and it’s something that I want to see again as soon as possible. It instantly establishes Alex Garland as a director to watch – cinephiles already knew he was a top-notch screenwriter – and is something that won’t leave your mind for days to come. Interestingly, it also contains the second most out-of-place dance sequence of 2015, trailing only behind the one in The Voices (also one of the few must-see films of the year so far). Both dance scenes are awesome, though, regardless of how little they immediately appear to fit within the context of the film.

Bottom Line: Ex Machina is a must-see movie for anyone who loves science fiction or cinema. It is as close to perfect as you can come.

Recommendation: If Ex Machina is playing near you, see it as soon as you can.