When Human Head Studios ran a closed beta for Rune: Ragnarok in late 2018, the team got a lot of feedback from the diehard fans that were still playing the 2000 hack-and-slash game Rune and discovered they still had a lot of work to do to live up to their expectations.

“Getting that feedback and looking at the game, we felt like the game just needed more time to cook,” said project director Chris Rhinehart. “We needed more time to tweak various things. We had a couple of changes we wanted to make to some of the core loops.”

To get that time, Human Head started looking for partners and made the controversial choice of working with Epic to make the game an Epic Games Store exclusive.

“They didn’t back up a dump truck of money to us and say make it exclusive,” Rhinehart said. “The money that we got went into developing the game and making the game better.” 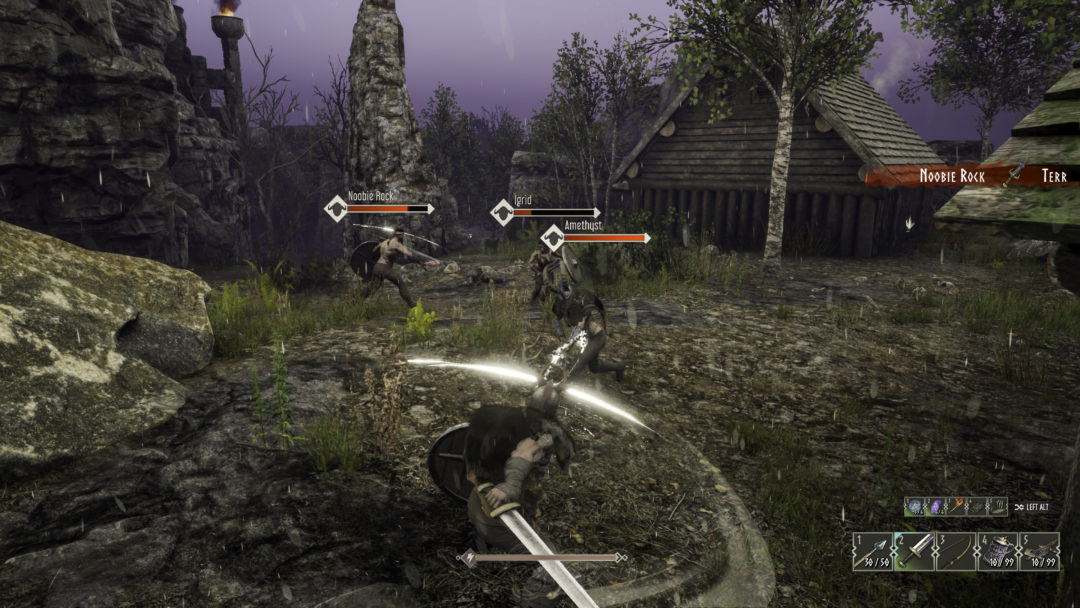 Players will be able to see the results on Nov. 12, but Rhinehart said the extra funding has already enabled Human Head to add in a Deathmatch player vs. player mode that was originally going to be a post-launch add-on. Up to 16 players will be able to fight to the death on multiple maps, with additional battlegrounds and fighting modes planned for the future.

Rune II is set decades after the original game, which followed the adventures of Ragnar, a viking warrior who sets out to avenge his father’s death and winds up trying to stop Loki from triggering Ragnarok. The studio renamed the game Rune II to make it clear that this is a true sequel rather than an expansion like 2001’s muliplayer expansion Rune: Halls of Valhalla.

In Rune II, the god has finally succeeded in kicking off the mythological apocalypse and hopes to escape his prophesied death by preventing the great battle from actually ending. He’s injured Heimdall, poisoned Thor, released the great wolf Fenrir, and driven Odin into hiding while Hel remains trapped in the underworld.

Your hero is resurrected by Heimdall and given the chance to earn a place in Valhalla by killing Loki, an objective that Rhinehart estimates will take about 15 hours, though completionists will spend a lot more time with the game. 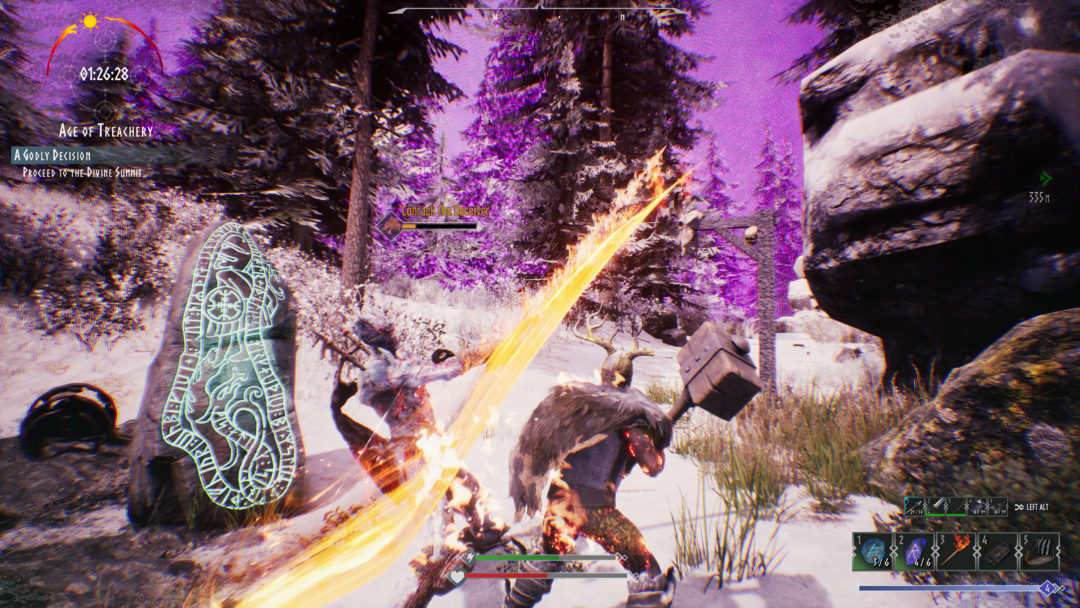 The crafting system is purposefully simple, with players learning recipes by acquiring ingredients like deer meat or breaking down equipment for their component parts. Cooking food will allow you to restore health, while building anvils inside longhouses will allow players to whip up items that are more durable than what they’ll find adventuring.

These items are also likely to have better stats. Players can also build runeforges to apply extra boosts to damage or healing. Rhineheart compared the game’s gear to that of Diablo, with a large variety of items that not only increase your defense and damage but can do things like make you run or sail ships faster. Players will want to keep a veritable arsenal handy to handle the game’s varied threats.

“There are enemies in the world that are vulnerable to certain attack types or certain weapon types, so you want to have a nice array of gear to tackle all the beasties that Midgard throws at you,” Rhineheart said.

Like in the original Rune, each weapon type has its own attack patterns. Short swords are quick, dealing lots of damage in close range, while great hammers are slow but can knock enemies back, and axes are great at chopping off limbs or even decapitating enemies. New to Rune II are bows and spears, which let players better attack from range rather than always having to rush into a fight.

Which god will you choose to champion in Midgard to bring down Loki and end Ragnarok once and for all?

Watch our new trailer below and decide which deity you will select! 🌩️ ❄️ 🐦 pic.twitter.com/A1cmLhpn3y

While players could throw their weapons in Rune, Rhinehart said that tactic was primarily used as a last resort. The new weapons allow the team to have more enemies that use ranged attacks and use some of Human Head’s learnings from the first-person shooter Prey. The combat will still feel familiar to Rune players, with attacks tied to your movement.

Rune fans will also find callbacks to the original game’s plot. One of the primary villains of Rune was Loki’s human ally Conrack, and in Rune II he’s returned as an undead draugr for you to fight all over again. Rather than playing a set character, Rune II players will be able to choose their gender, appearance, and which god they serve: Odin, Thor, or Hel.

Each of these gods come with their own sidequests and mechanical benefits such as poison resistance for Hel or improved skill with a hammer for Thor. Each god also bestows their heroes with a unique ultimate attack like throwing Thor’s hammer to blast everyone around you with lightning or calling out ice spikes from the underworld that knock back nearby enemies. Currently that power can be used about every two minutes, though Rhinehart said the team is still tweaking and balancing it. 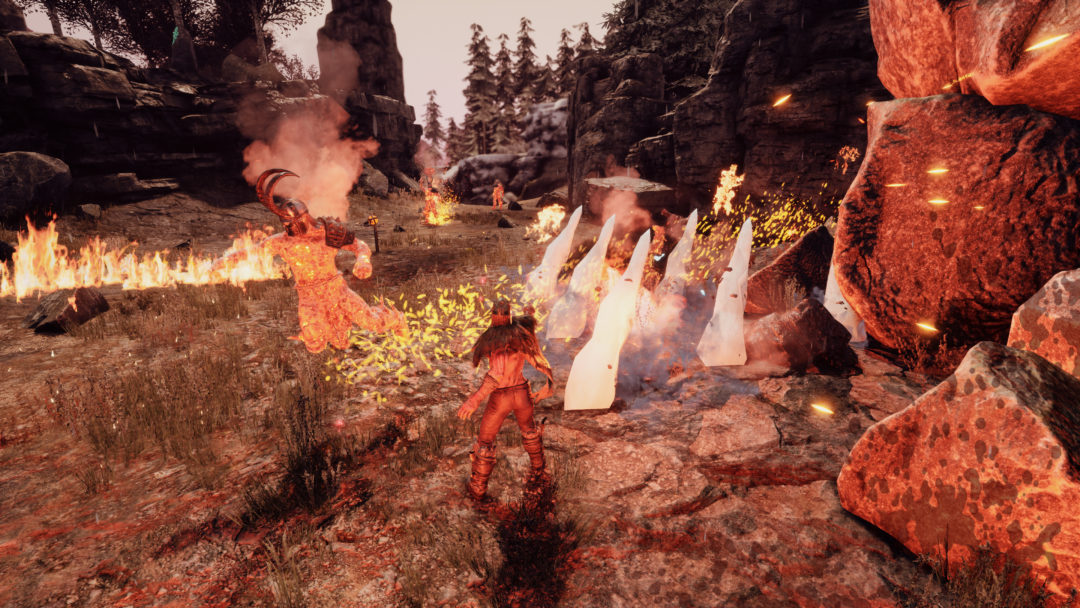 “If the cooldown is too long, people forget about it or they tend to hoard it,” he said. “If it’s too short, then the ability becomes a little bit overpowered and people are using it at the beginning of every combat.”

After launch, Human Head plans to continue adding quests and enemies to the game, along with more gods that players can align to. Rhinehart said he doesn’t lack for material.

“In Rune II we’re only exploring Midgard,” he said. “In Norse mythology there are nine realms so there’s eight other realms that we can draw upon to have more areas to explore.”

Norse mythology has become much more popular since Rune was published thanks to the Thor films, the show Vikings, and God of War. Even the next Assassin’s Creed game is rumored to be about Vikings. But Rhinehart said he’s not worried about the competition.

“I don’t think people are sick of Norse mythology,” he said. “People find it compelling. Gods fighting each other, the looming threat of the apocalypse at all times, the gods knowing that many of them are going to die, the brutality of it. I’m glad that it’s out there and people remain interested in it.”