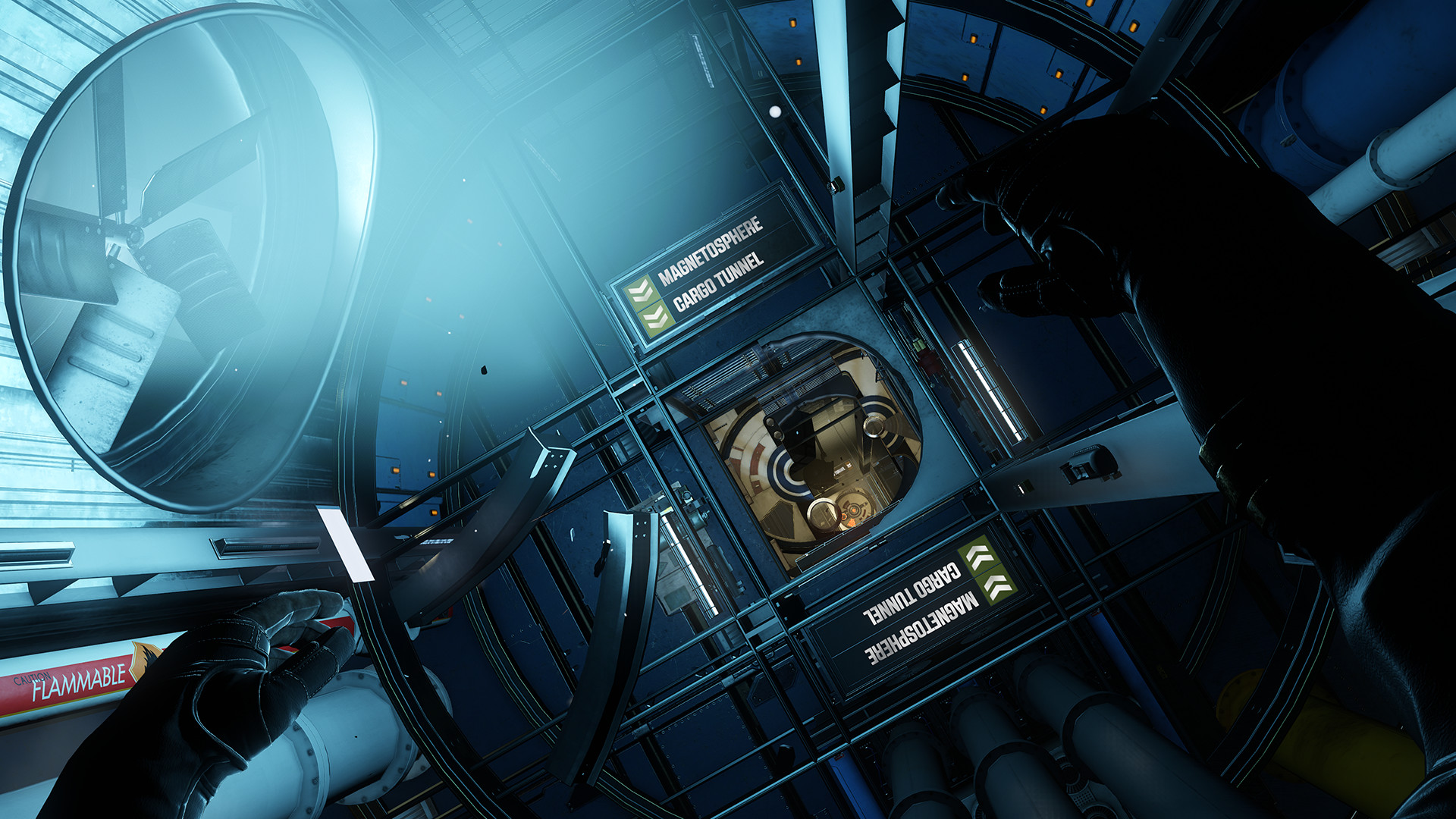 Unlock and upgrade knowledge (or paranormal abilities) with neuromods in Prey [2017]. Here, find all the locations we’ve found so far as we explore the Talos 1 station.

Neuromods are the bread-and-butter of upgrades in Prey. If you want to lift heavier objects, get better at hacking, or increase your HP and damage output — you’re going to need neuromods, and lots of them. You’ll eventually unlock the ability to manufacture your own neuromods, but the station is littered with free upgrade points.

Want to make sure you don’t miss out? Check all the locations below, and return soon as we update with the latest finds and secret spots.

[Work-in-Progress: Check back soon for new locations. It’s a big station out there!]

NOTE: The Neuromod Fabrication Plans can be acquired in the Fabrication area in the Neuromod Division section. Find the plans in Halden Graves’s office.

Neuromod x1: The first Neuromod is located in the Neuromod Division foyer. Find it on the large display, under the large “NEUROMOD” sign on the first floor, right after picking up the GLOO Gun.

Neuromod x2: Hack the Volunteer Testing door (Hacking 2) and enter the Neuromod Installation and Extraction. The Neuromod case is on

Neuromod x1: Inside a display case in the Talos 1 Exhibit area, easily found on Level 1 of the Lobby.

Neuromod x1: Hidden in a Smuggler’s Cache in the Exhibit area. Break open the alarm bell near one of the exit doors to reveal the cache. Hit it with your wrench three times.

Neuromod x3: There’s a x3 Neuromod on the large desk in Morgan Yu’s office. The office is on Level 3, in the Executive Offices area.

Neuromod x4: Under the desk, in the office adjacent to Kelly Randolph’s office in the Sales Department, accessible through the Teleconference Center.

Neuromod x1: Inside the I.T. Security room, look in the cabinet to the left of the main office terminal.

Neuromods x4: In the malfunctioning safe (Hack 2), sitting near the Psychotronics entrance door.

Neuromod x3: Enter the code [7324] into the safe in DeVries office to access these mods. If that code doesn’t work, look on the wall in the Quarantine room. Get the keycode for DeVries office from his corpse at the top of the Main Lift shaft.

Neuromod x1: In the fallen display case, to the left in the hallways just past the foyer room.

Neuromod x1: Open the Smuggler’s Cache on the second floor of the atrium. Hit the red bell behind the statue of William Yu to open the stash.

Neuromod x1: In a briefcase on the main Demonstration Stage.

Neuromod x2: Find it in the Machine Shop Storage Room. Unlock the door (Hack 1) or find the code on a locked computer terminal on the second floor, between the Foyer and Atrium.

Neuromod x1: The corpse of Peter Colemn is carrying one neuromod. Jump up onto the conveyor hanging from the Machine Shop ceiling to get it.

Neuromod x2: Find two individual neuromods in the secret compartment in Calvino’s workshop. Grab the red tumbler and place it on the weight on the work table to the right of the steps to Calvino’s office.

Neuromod x2: Crack the Hack 3 safe inside the Hardware Labs hull breach to find these.

Neuromod x2: The corpse of Janos Jozsef is holding two neuromods. Find the corpse in the Maintenance passage beneath the men’s Clean Room Preparation room.

Neuromods x2: The safe in the Director’s Office contains two Neuromods. Break through the window, and get the keycode for the safe from Alex Yu while completing the “Detour” quest.

Neuromod x1: The Neuromod is on the desk near Annalise’s workstation, in the blocked office by Lab A.

Neuromods X2: There are two Neuromods next to the locked Labs B-3 door in the Behavioral Biometrics wing.

Neuromod X1: Next to the GLOO Cannon on the Armory floor. Get the Armory keycode from the prisoner in the Materials Extraction area. Or, use Mimic to get through the tiny opening in the window.

Neuromod x2: There are two Neuromods on the crash cart in the locked morgue. Use Mimic to get through the window or Remote Manipulation to pull the keycard from the crash cart.

Neuromod x1: Look in the Supply container in the Monitoring Station, in the Research Level tunnel.

Neuromod x2: Anders Kline is also carrying a pair of Neuromods and a chipset.

Neuromod x1: By a red toolbox, near the fabricator and recycler in the Loading Bay. Found on a dead body.

Neuromod x1: On the chess table just south of the Weapons Locker on the map.

Neuromod x1: The hidden cache is located directly above Lily Morris’s corpse in the Talos 1 Lobby passage. Hit the red alarm bell three times with a wrench to open it.

Neuromod x1: Take this Neuromod off Alex Yu’s desk in his office.

Neuromod x2: Alex Yu’s safe contains a transcribe and two Neuromods. The safe is hidden in a maintenance hatch behind the desk. Use Leverage 2 to move the cargo and Hack 3 to open the safe.

Neuromod x1: One Neuromod can be scavenged off the cook’s body if you knock him unconscious or kill him. Complete the cook’s request quest to gain access to the kitchen.

Neuromod x3: There are three Neuromods in a pack directly above the Q-Beam in the freezer area, through the back door of the kitchen. Get the keycode from the cook after repairing the regulator.

Neuromod x3: Found in the locked Mail Room, behind the Concierge desk.

Neuromod x3: Inside Sylvain Bellamy’s cabin. Find his body (with the card) in the Psychotronics morgue. You’ll also find a chipset on his desk.

Neuromod x1: One Neuromod is on the desk next to Danielle Sho’s terminal in her cabin.

Neuromod x1: This neuromod is on the desk in Abigail Foy’s apartment.

Neuromod x3: Find the safe hidden behind the Looking Glass screen in Calvino’s cabin. Use the code from the note on his desk to collect the trio of Neuromods.

Neuromod x1: On the lower shelves of Dayo Igwe’s desk, in his cabin. There’s a chipset in the conjoining shelf.

Neuromod X2: On the desk in Morgan Yu’s cabin.

Neuromod x1: In the locked closet, on the second floor hall outside the Data Vaults. You’ll need Hack 4 to open the closet door and the safe.

Neuromod x2: On the desk by Danielle Sho’s computer, in the Command Center.

Neuromod x1: Near the wooden / metal shelves on the wall opposite the exterior window in the Data Vaults room.

Neuromod x1: A stache of items is located in the Cargo Shipment Control Center. Hit the red bell on the wall three times to open the secret compartment and collect the contents — it includes a Weapon Upgrade Kit, a Neuromod, and an EMP Charge.

Neuromod x4: To the left of Sarah Elazar’s position in the Quartermaster’s Office.

Neuromod x1: In a red toolbox, in the corner of Cage 2. Hack the terminal next to the Cargo Bay A door, then move the heavy crates (Leverage 3) to get inside.

Neuromod x1 In the back left corner of the Cargo Bay B area, near a large white door. Loot the dead body.

Neuromod x2: Locked in the container in the G.U.T.S receiving hallway, near the Life Support bulkhead. Use Hack 2 to open it to find this mod along with a large cache of supplies.

Neuromod x1: In the large metal shelf, inside the Medbay.

Neuromod x3: Located in the Supply Closet (Keycode: 5105) at the bottom of the Grav Lift.

Neuromod x2: In the safe, in the Security Booth near the Talos 1 Lobby bulkhead. Use the code found on a note, carried by a nearby dead body.

Neuromod x1: The corpse carrying a neuromod is inside the eel tank at the bottom of the Water Treatment Facility. Unlock the eel harvesting terminal from Price Broadway’s workstation up in the Monitoring Station, then select to harvest the eels with the terminal at the bottom of the grav lifts. His body will drop out of the tank.

Neuromod x2: On a crash cart in the Water Quality Lab.

Neuromod x3: There are three neuromods floating just beyond the door to the Engineering Offices. Technically, these neuromods are located in the Talos 1 Exterior, accessible in the Power Plant breach.

Neuromod x1: Corpse on the landing opposite the entrance to the Monitoring room. Carries a transcribe, a neuromod and a chipset.

Neuromod x1: Found on the body in the burning wreck to the left of the sealed Coolant Chamber keycard door.

Neuromod x3: Located on the desk, near the battery fabrication plan in the office opposite the airlock.

Neuromod x1: On the back-right shelves, next to the Wrench Fabrication Plan in the Parts Storage room.

Neuromod x2: Found on the dead body of Nicholas Stillwater, in the ruined lift on Level B4.

Neuromod x1: There’s one Neuromod on the ground, near Blaine Cooly’s corpse in the Information booth.

Neuromod x1: On the same desk as the Suit Repair Fabrication Plan and the keycard in the locked Pilot Planning Room.

Neuromod x1: On the same desk as the GLOO Cannon Fabrication Plan, in the Tooling Room behind the locked Maintenance Facilities door.

Neuromod x1: Same place as the transcribe in the Flight Control Room.

Neuromod x2: Two Neuromods are locked in the safe in Mia Bayer’s office. Use Hack 3 to unlock the safe and get these mods.

Neuromod x1: Carried by Jada Marks, on her dead body in the Captain’s Loft.