I first got to check out Extreme Exorcism at GDC earlier this year, and one thing I can say with certainty is that after 10 minutes of hands-on time, I knew everything there was to know about the game. I’ve been playing the release build for a week or so now, and that stands true. Extreme Exorcism isn’t a complex game. Five minutes in, and you’ll know exactly what’s going to happen for the next 20 hours. The elegant simplicity of design is one of Extreme Exorcism‘s greatest strengths. It’s robust enough an experience to keep gamers around, but it’s simple enough that non-gamers can pick it up in a couple minutes. 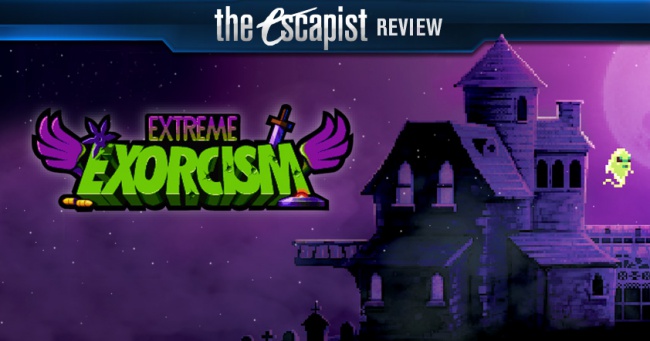 Extreme Exorcism takes your standard combat platformer, restricts it to a single-room arena fight, and uses an incredibly unique approach to spawning your enemies: The enemies you fight are ghosts of your former runs, moving and attacking exactly as you did in the prior rounds. This doesn’t apply in the first round, of course – you just need to kill a mostly-harmless haunted chair – but starting on round two, you’ll need to keep an eye on your movements to avoid creating a bad situation for yourself in the next round. Round two you’ll fight one ghost – the ghost from your previous run always wears a crown, and killing it moves you to the next round – and round three you’ll fight two. Every round will spawn ghosts from all your previous rounds, and there’s only one way to get them out of your way permanently; exorcism.

EE has four characters to choose from, but they’re all identical aside from name and color. Weapons, on the other hand, are delightfully diverse, ranging from a melee-only sword to a rocket launcher, a spreadshot shotgun to a tricky-to-use grenade launcher. The purple wings that spawn? They’re basically your Bible and Crucifix. When you attack with this, you’ll float stationary for several seconds with a large bubble around you. Enemies get drawn into the circle, and utterly obliterated. You can clear several ghosts fairly easily with one exorcism, with the immense benefit of permadeath. Once you’ve exorcised the ghost, it’s gone forever. Trying to navigate a board with 10 ghosts all running, jumping, and attacking everywhere on screen gets hard fast, so clearing away some of the enemies is crucial to getting to higher rounds.

The campaign is playable solo or with friends, though it is undoubtedly more enjoyable with some co-op buddies. There’s no friendly fire to worry about, so it’s an entirely cooperative experience. The only real benefit of killing the crown yourself is that the next crowned ghost will be your color. PvP, on the other hand, is intense, frantic, and wildly entertaining. You’ll have no AI enemies to worry about, so it’s just players in round one. Once a player gets a kill, however, the next round will spawn their ghost, just like in the campaign, which the opponent will have to dodge more successfully this time, while also avoiding the player’s attacks. The setup does have the inherent flaw of “win more” effect, since winning two or three rounds in a row puts you at a nearly insurmountable advantage, but it’s incredibly quick to play, and likely won’t be the case every match.

Extreme Exorcism is a sprint kind of game. You’re not likely to marathon it for hours and hours, but it’s the perfect way to kill an hour with some friends while you’re waiting for your 40GB AAA download to finish up. You’ll come back to it, too. Epiphanies will strike on how to game the system and get to higher rounds. It doesn’t usually play out quite how you imagine, though. The best laid plans, as they say.

Bottom Line: Extreme Exorcism will have a fairly broad appeal, given the simplicity of the mechanics. You’ll likely need to explain to your non-gaming friends how it works, but even the most staunch luddites will be able to grasp what’s going on.

Recommendation: Extreme Exorcism‘s $12.99 price tag isn’t too scary (ha!), but is a better investment for those with frequent local co-op visitors. There’s an immense amount of entertainment to be had single player, but it really shines when your friends get involved.