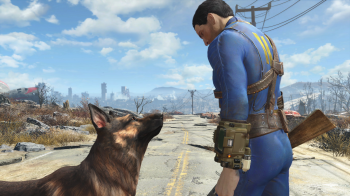 That’s a lot of wasteland wanderers.

While a lot of those sales were physical copies (especially for the PS4 and Xbox One editions), Fallout 4 has also broken some digital records. On Steam, Fallout 4 became the number one game played, surpassing Grand Theft Auto V‘s previous record for concurrent play with over 470,000 players. The Fallout 4 Pip-boy companion app also became the number one downloaded app on the iTunes store.

Additionally, Twitch has stated that Fallout 4 was the “most viewed game launch of all time”.

“We’re extremely proud of Todd Howard, Game Director at Bethesda Game Studios, and his experienced team of developers for their talent and dedication in creating this extraordinary game,” said Vlatko Andonov, President of Bethesda Softworks. “Fallout 4 is a masterpiece in game development and storytelling, providing fans hundreds of hours of fun as they explore and are challenged by this fascinating, beautifully crafted world.”