To compliment Erin Hoffman’s excellent take on the subject of game design programs at the community college and university level, The Escapist recently contacted Matt Deller, long-time teacher and former a member of the development team behind Neverwinter Nights. Matt is now a high school assistant principal in Southern California’s Pomona Unified school district, and the mastermind behind the nation’s first high school game design program – and the only one fronted by a former developer.

“It was a crack shot to get in [to developing], as I was basically a ‘fanboy,’ for lack of a better term,” Matt recently told The Escapist, “with zero experience in programming/game development, not to mention I was already ensconced in a seven-year teaching career. One day I was teaching Ecology, the next I was working as a designer on NWN 2 with the guys who had made some of my all-time favorite games. Of course, the grass is not always greener on the other side, and I soon learned why the industry turnover rate is so spectacularly high – a topic which prospective game-developers never tire hearing about.”

Deller eventually left Obsidian to take on his assistant principal job, but he looks back on his days as a game developer fondly and hopes to bring a little of his experience to bear on the dreams of his “prospective game developers.” His program features hands-on instruction using Neverwinter Nights‘s Aurora toolset and the toolset for Valve’s Half-Life, as well as occasional lectures from the occasional visiting developer. 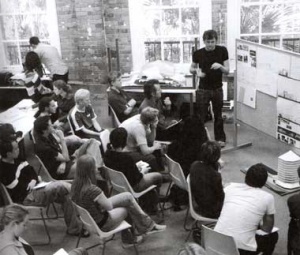 The Escapist: Does your program focus more on the technological skills required for game development or the more esoteric fundamentals of effective design, or both?

Matt Deller: I’d say both. We use a great text, The Art of Producing Games by David McCarthy, Ste Curran and Simon Byron that covers the history of game development, the basics of what goes into designing games and what the industry is like today. The instructor, David Newton, does an excellent job of supplementing the text with his notes and lectures concerning game design. Nothing beats hands-on experience however, and that’s where Neverwinter Nights comes in.

Throughout the semester, students have been learning the basics of Neverwinter‘s Aurora toolset to the point where they will soon submit a final project of a full-length module that follows their original design document. At Diamond Ranch High School, it’s currently “crunch time.”

TE: Some criticism levied at game design programs is that they’re often staffed by folks with little or no actual game design experience. How do you think your program fares in this respect?

MD: At this point in time, find me another high school assistant principal who also has a design credit listed for a Triple-A title and I’ll consider it valid criticism for our respective program. I suspect I won’t hold such a geek-tacular title for long though, with companies discovering new pipelines of talent from law, medicine, engineering and other fields.

Case in point: Ferret Baudoin, NWN 2‘s Co-Lead Designer, dropped out of law school to make games and Obsidian Lead Designer Kevin Saunders obtained a Masters in Physics from Cornell before switching over to game design.

The Escapist: What are your goals in terms of getting kids placed into programs? Furthering their goals for entering game design, or getting noticed by design studios?

MD: Well, it’s our first year in running the course – our goal at this point is to build the program where it is able to incorporate the other venues offered from our “Digital Academy,” like Computer Animation, Programming and Graphic Arts. Having done that, I feel that we can be confident in assisting students to apply for four-year game design programs or to look for work in the industry right after graduation.

TE: Is the program elective-based? And what kind of kids do you draw, demographically speaking, etc.? What percentage are male or female, and how many have played games before coming in?

MD: The program is elective-based, and part of our district’s Vocational Education program. Students must take at least 10 credits in Vocational Education to graduate from high school – they are able to choose from courses like Culinary Arts, Law Enforcement, EMT, Fire Science, Cosmetology, with Game Design now included.

Our requirements for gaining admission into the class are set pretty high. Currently our class consists of juniors and seniors, with 25 percent of the class consisting of female students. Most are avid gamers, the likes of having sold their souls to World of Warcraft many ages ago. I recently brought in Michael Chu, Game Designer for Blizzard, to speak to the class and they almost mobbed the poor guy.

TE: What is it about Neverwinter Nights and Half-Life that makes them particularly well suited for this type of instruction?

MD: We use Neverwinter Nights as our primary toolset – I don’t think that it has an advantage over any other toolset per se, but the fact that there is an enormous amount of community resources available like video tutorials and toolset manuals is the reason why it tops our list. In addition, I worked extensively with it back in the old days, so it made it much easier to provide our instructor Mr. Newton with support whenever he had a particular question.

TE: How receptive are the kids to the games considering they’re about a decade ahead of their time?

MD: Any game really, however often you may find it in the bargain bin, suddenly takes on a new life when it’s introduced in a classroom setting, as it does a fantastic job of breaking up the monotony of traditional instruction. Does the man dying of thirst ponder whether Evian or regular tap water will suffice?

Needless to say, our students are very enthused with both Neverwinter and Half-Life as mediums for game design.

TE: You recently mentioned you believed your students’ perception of gaming has changed. Changed in what way?

MD: High school students used to typically display an abundance of naivet?oncerning the game industry and how games were developed. Students who are in University-level programs for Game Design are a bit more hardened about what the realities are. I’m now starting to see some of that trickle down now to high school students.

This is striking to me because I remember picking up my newly minted copy of Baldur’s Gate in 1997. Playing it was such an incredibly immersive experience because I had no idea of the production that went into making such a game. Now, with company forums for fans, TV programs like G4, Penny Arcade tell-alls and designers gaining rock star-like status, gamers are sure to discover how many donuts their favorite designer crammed down their pie-hole while designing a particular quest or what the company’s restrooms really look like in a programmer’s blog. To me personally, it takes a bit of the magic out of the finished product.