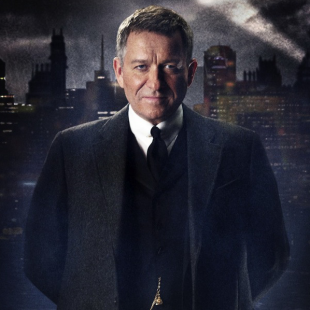 Sean Pertwee’s Alfred has been revealed in new images released by Fox.

Fox’s Gotham is shaping up to be an interesting beast. Part police-drama, part-Batman origin story, it seems poised to deliver an interesting take on Batman lore that examines keys characters in their younger days. That in mind, Fox hasn’t been shy about sharing details about the cast and the way they’ll be interpreted by the show.

Adding to the stockpile of information, in turn, are new images from the series’ production showing off actor Sean Pertwee in his role as butler extraordinaire Alfred Pennyworth. To his credit, Pertwee looks fairly natural in the role. Then again, when it comes to Batman characters, Alfred probably isn’t the hardest one to nail casting wise. All you really need to do is find a British actor who can deliver a good dry quip and you’re pretty much golden.

Nonetheless, it’s good to learn more about the show and we look forward to seeing Pertwee’s “tough-as-nails ex-Marine” Alfred in action. Moreover, it will be interesting to contrast his performance with Michael Caine’s recent take on the character as well as Jeremy Irons upcoming rendition in Zack Snyder’s Batman vs. Superman flick.