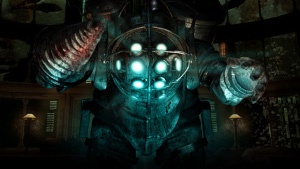 “I pissed off a lot of people on the project because my storytelling came in late, ” said Ken Levine, towards the end of his GDC lecture, referring to rumors, apparently true, he’d alienated a large portion of the 2K staff who worked with him on the critically and commercially successful BioShock. “I think it’s important for a writer to … let the game inform the story.”

Levine described going into gameplay meetings to discuss ongoing design elements and coming out “filled with excitement and ideas.” He said often the best story elements came as a result of seeing what the designers and technicians were doing with his original ideas, creating a back and forth of creativity that shines through in the resulting game. “BioShock is so different [from other games] because of the luxury of time.”

To describe how he got there, how the team and the game got there, Levine picked apart his process, starting with characters. Each of the game’s main characters has a role to play. Everything they say or do reflects a certain point of view, a point of view carefully tailored to tell a very specific part of the story. Individually, they’re one-dimensional. Together, they present a complete picture, and a stronger whole.

“It’s challenging when you have these characters that you’ve grown to love to focus them … but it’s important the audience understand … what they’re saying” and how what each character has to say impacts the world.

In making a game as rich and deep as BioShock, the problem arises of making “too much” story, of investing time and energy into elements a many or most people will never see. “We have to accept that they might miss most of it,” Levine said. “We decided to give the player the option to opt out [of the story]. … When you have a deep narrative, you have to allow for people not to care. We have to make it possible for people just to go in and kill people.”

He described the “three levels” of story. The first and most basic is “kill this guy.” This is for people who just want to fire up the game and shoot bees out of their hands. The second adds a bit more depth, to where you maybe understand the characters’ motivations. And the third is for people who live on message boards, buy posters and write their own fan fiction. You have to play to those people, too, Levine said, “but that can’t get in the way of the experience of the guy who just plays Madden and Halo.”

“Another important lesson we learned from System Shock 2 was don’t do what you can’t do,” he said, referring to trying to create technological wonders that are just out of reach of the technology. You ruin the experience that way. He described having to draw fake doors and windows to fill space in a city environment, but if the player interacts with those doors and windows, they don’t go anywhere because there’s no game behind them.

“One of the things we want to do is put the player in a constrained environment,” he said. In System Shock 2 the environment was a spaceship. In BioShock, an underwater city. This solved a lot of fake door problems.

“Another thing we did was – you might not have noticed – a lot of people were dead,” he said. “I think we catch a lot of heat for this. But people have problems.” Problems like breaking things, and when things get broken, the player gets taken out of the experience, focusing instead, on the broken things. “Anything that lifts that veil should be avoided.”

As a result of the game’s constriction into a confined space, it became a lot more believable as a world, in spite of its completely fantastical nature. “A Ryandian utopia at the bottom of the ocean was more believable than a lot of game spaces,” he said, and he’s right. They didn’t do what they couldn’t do, and as a result, what they did do, worked. 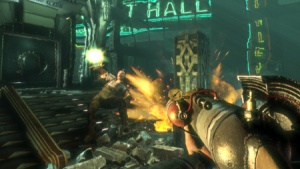 “Essentially BioShock was a period piece,” he said. The period was the Empire Age, when Django Reinhardt played on the radio, and big men with big ideas made dreams come true. Art deco on the walls tells you instantly where you are in time, and that creates a point of reference. “Everybody was familiar with the period. Your story can be about aliens coming to Earth, or about an Earthling going to an alien world, but it can’t be about an alien going to an alien world.”

But no matter where your story is set, or how complicated it ultimately becomes, the story goals, the motivations of the main character “have to be fucking stupid.” To make his point, Levine referenced Indiana Jones and the Raiders of the Lost Ark, specifically the scene where Indiana Jones finds Marion held captive by the Nazis. In every scene of the film, Indiana’s goal was the same: to find the ark. When he finds Marion, is he going to save her? “No. he’s busy.” It was a ballsy storytelling move, but it fit the character, and you always knew what he was after, and where he was going. Games, according to Levine, should be the same way. You can have as convoluted a story as you want, but the goals need to be clear: rescue Atlas’ family, kill Ryan, escape Rapture.

“BioShock‘s a detective story,” Levine said. “Detective stories are interactive … a natural fit for games.” He says the increased graphical ability of today’s game machines give designers the ability to render not only the wheat, the essentials, but the chaff as well. “Chaff is the ability to render a huge amount of density … where the player can try to find what’s important. If you have a game of Clue, and all you have is Professor Plum and a candlestick and the conservatory, it’s not a game of Clue.”

Levine’s example was of Atlas’ wife and child, named Moira and Patrick. Atlas, as you know (or do now anyway) was an alias; the man pretending to be Atlas was actually named Fontaine. There was no Atlas, no Moira and Patrick. If you look around a bit in BioShock, you’ll find an advertisement for a theatrical production called “Moira and Patrick.” This is a bit of chaff that isn’t critical to the story, but if you find it early, Levine says, it plants a seed.

Another example is the crazed plastic surgeon, Dr. Steinman. “When you meet Dr. Steinman, he’s a guy with a machine gun and a surgical mask,” said Levine, which, alone, isn’t that impressive. But leading up to the encounter, you’ve been introduced to the character through story bits, writings on the wall and diaries of other characters who knew him. So when you meet the guy with the machine gun and a surgical mask, “you’ve been set up to have an emotional reaction. By the time you meet him, you have a relationship with him, and the A.I. has to carry a lot less weight.”

Levine described what he called “the mystery balloon,” saying that answering questions wasn’t nearly as interesting as asking them. By continually asking questions and answering them piecemeal, the player remained engaged, always looking for answers, but satisfied at the same time. He says it’s a difficult balance.

He also, in what used to be a radical departure for game designers, but is rapidly becoming par for the course with Ken Levine, admitted to having made a grave mistake. He says they probably shouldn’t have solved the riddle of the player’s relationship to Ryan when they did. He says after the player knows where he came from, the balloon falls flat, and although the last levels of the game, gameplay wise, are some of the strongest, the impetus to keep going is lost. “I think we underestimated the impact on the player.”

What does it say about a game when the designer can admit to having made a huge mistake in designing it practically every time he shows up to talk, and yet it still sells millions of copies? Only good things, I think. BioShock is nominated for five awards at GDC’s Game Developers’ Choice Awards Wednesday, including Best Game Writing and Best Game.