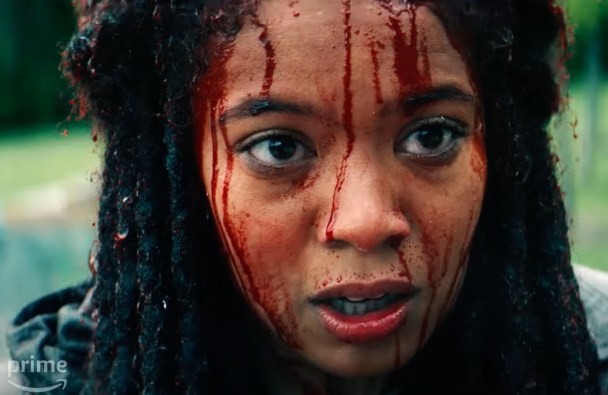 College, it seems, is a bit different for the superpowered. Sure, there’s learning and sex and parties, but there also appears to be a lot more blood and killing as we can see in the first trailer for Gen V, the upcoming The Boys college spinoff series. The show is set to expand the world of The Boys by taking us to Vought’s superpowered college campus, Vought International’s Godolkin University, and show us just how the future of corporate superheroism is grown.

Gen V looks very in line with its predecessor in this first-look trailer, taking the gore and violence that most superhero shows shy away from and ratcheting it up to 11 all while poking holes in the superhero mythos and satirically taking down society while it does it. There isn’t much plot being shown off in this teaser; instead it chooses to focus on blood, blood, blood, people being interviewed, and blood. In fact, very few shots in this Gen V teaser don’t include some sort of blood, be it from a human or from, what appears to be, a murderous puppet of some sort. The latter is most likely a spoof or educational video for the students, not a new superhero puppet character, but who really knows? What we do know is that the series is being described as part-Hunger Games and part-college show, as the students not only do college things but vie for big Vought superhero contracts.

As teased in the first-look trailer, Gen V will see a host of The Boys characters making guest appearances. Already confirmed are A-Train (Jessie T. Usher), Ashley Barrett (Colby Minifie), and Adam Bourke (P.J. Byrne), but that’s probably not all and it would be especially fun if Karl Urban’s Billy Butcher showed up on campus to wreak havoc for an episode or two. That being said, the main cast of the series will get most of the limelight. That cast includes Jaz Sinclair as Marie Moreau, Lizze Broadway as Emma Shaw, Patrick Schwarzenegger as Golden Boy, Sean Patrick Thomas as Polarity, and Marco Pigossi as Doctor Edison Cardosa. The series also stars Chance Perdomo, Shelley Conn, Maddie Phillips, London Thor, Derek Luh, and Asa Germann.

No release date has been set yet, but Gen V will land sometime in 2023.