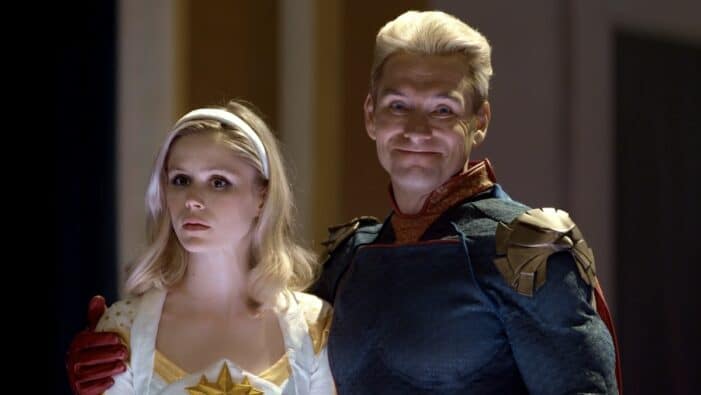 Can’t get enough of ultra-violent superhero shows that viciously deconstruct not just the superhero genre but society itself? Then you’re probably really, really excited for the upcoming The Boys spin-off series set in college. The show has been in the works for a bit, but today Amazon revealed the series name as Gen V, a nod to the Compound V serum that gives superheroes their power in The Boys universe. Alongside the title announcement, Amazon also released a video introducing us to the cast.

Allow us to introduce ya to GEN V, The Boys college spinoff in the works with this brilliant bunch. pic.twitter.com/OOKjjqb87y

Gen V will take place at the country’s only college exclusively for superpowered people. It’s kind of like the X-Men, but instead of a school for gifted children run by a kind psychic in a wheelchair, this one is run by Vaught Industries and the students are competing for the best contracts to serve in the best cities.

As Amazon put in its press release, “Gen V is an irreverent, R-rated series that explores the lives of hormonal, competitive Supes as they put their physical, sexual, and moral boundaries to the test, competing for the best contracts in the best cities. It’s part college show, part Hunger Games—with all the heart, satire, and raunch of The Boys.”

Tying this setup for Gen V into those factors that have made The Boys so popular is a good move. Clearly, Amazon isn’t shying away from basically saying that this is just more of The Boys but with younger people and college things. The cast pretty much says the same thing in the video.

That cast, in case you can’t read fast enough, includes Jaz Sinclair as Marie Moreau, Lizze Broadway as Emma Shaw, Patrick Schwarzenegger as Golden Boy, Sean Patrick Thomas as Polarity, and Marco Pigossi as Doctor Edison Cardosa. The series also stars Chance Perdomo, Shelley Conn, Maddie Phillips, London Thor, Derek Luh, and Asa Germann. The show’s production hasn’t been the smoothest with a shakeup in the creative team early on, but after some recasting and changes it seems to be on track to offer up all the super-on-super violence we know and love.

There’s no release date yet for Gen V, but The Boys season 3 recently concluded in satisfying fashion.