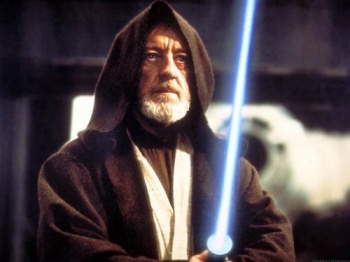 British tabloid newspaper The Sun claims that Lucas is snapping up the film rights for dead celebrities, and cites a comedian as its source.

You can shelve any hopes of seeing Alec Guinness play Obi-Wan Kenobi one last time, as Star Wars head honcho George Lucas has refuted rumors that he plans to bring long deceased actors back to life using the black arts of computer graphics.

The story originated in British tabloid newspaper, The Sun. Comedian Mel Smith, who worked with Lucas on the movie Radioland Murders in 1994, and was described as Lucas’ “pal,” apparently said that the director had been quietly buying up the film rights for dead actors. Lucas was “obsessed” with computer imagery, Smith said, and wanted the likes of Orson Welles and Barbara Stanwyck to appear alongside modern actors. The inevitable denial of these claims was terse and to the point. A spokesperson for LucasFilm simply said that the rumor was false and didn’t go into any more detail.

This would likely be the line that LucasFilm took regardless of the validity of the rumors, but even the most fervent critic of Lucas would have to admit that the source of the rumor is a little fishy. British tabloids don’t have the best reputation for accuracy in the first place, and the Sun in particular has no problem re-writing its own content to make it more sensational. I’m not sure The Sun would make this story up from whole cloth, but I wonder if the quote from Smith has been presented out of context.