Godzilla has been the uncontested King of the Monsters for over 60 years in film, but no game franchise has ever claimed the title of king of the monster video games. The city-obliterating Rampage series of games hasn’t been relevant for well over a decade, even though it somehow earned a recent film adaptation starring The Rock. Meanwhile, PlayStation 2 cult hit War of the Monsters was a fan favorite but never evolved into a franchise. Subsequent takes on kaiju action have typically seen a mixed reception at best.

Malaysia’s Passion Republic Games senses this void and is making its move. The studio officially unveiled GigaBash in August, a multiplayer 3D brawler in which the titanic slap fights between monsters and mechs threaten to flatten entire cities. It’s a game in the War of the Monsters mold that prioritizes fun destruction over highly technical competitive play.

“Our goal is to create a game that is easy to pick up but also has enough depth for more competitive players to enjoy,” explained co-director Mel Law. “We want players of varying skill levels to play together and have fun, so our control scheme is geared towards more simple, one-button executions, but with contextual variants depending on what you’re doing. So, you get a different attack depending on if you’re blocking, or in mid-air, or grabbing someone, etc.”

That simple, context-dependent control scheme might sound reminiscent of Super Smash Bros., but Law said that the team is casting a much wider net for its influences.

“We’re inspired by many games. To a lot of us in our team, (1991 SNK fighting game) King of the Monsters and Rampage are part of our childhood. We looked at a lot of non-kaiju games that have influenced us too, like WWE games, Power Stone, and Gundam Versus. We play a lot of party games, or games that support more than two players, in the studio almost every lunch hour. Games like Overcooked, Gang Beasts, and Rocket League.”

Law said that the titles Passion Republic is drawing inspiration from are almost always as much fun to watch as they are to play, so the scale and spectacle of the game’s metropolitan destruction is a big priority for the team. “You can pretty much level each level,” he joked. “Our maps are designed so that as the monsters fight, the environments will get completely flattened. So when the game nears its end, the players can all marvel at what they’ve done.”

GigaBash will feature six distinct biomes, each with multiple unique stages containing different buildings and other objects that players can use to pummel one another. Certain stages will also have interactive gimmicks.

Ensuring the game’s monsters had appealing designs was a big part of nailing the game’s party atmosphere. GigaBash‘s first publicly revealed character, Gorogong, went through dozens of wildly different iterations before his final design was locked. Some of these early mockups resembled monkeys, others were more like sharks, and one proposed design was even an enormous chicken. 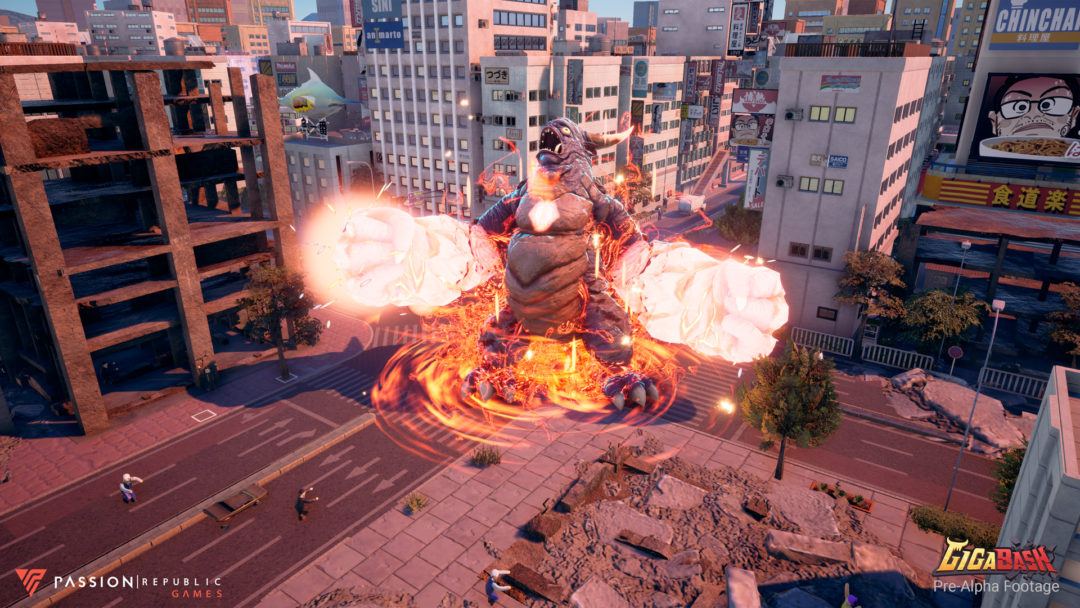 “For every character we create we go through a few phases of development,” Law explained. “We start with thumbnail exploration based on character descriptions and move sets. Then we’ll pick designs to iterate on and make sure it’s readable from every angle. Then we iterate again once we see the 3D model in-game… A lot of (Gorogong’s) earlier designs were fun, but we thought for our first character we wanted something more classic and all-rounder. Like our version of (Street Fighter‘s) Ryu. We knew from the get-go that our game isn’t too serious in tone, so his blank expression really felt like a perfect fit.”

Since the initial reveal, Passion Republic has unveiled three new characters each with their own distinct look. There’s the crab-like Pipijuras, who was inspired by classic tokusatsu media; the heroic mech Thundatross, whose look is a riff on giant mecha anime; and the fuzzy Woolley, who was born from a desire to have a more appealing and cutesy character in the roster.

“Our goal is to create a roster composed of giant monsters from a wide range of influences,” said Law. “Our monsters are inspired by everything from Western to Japanese to southeast Asian creatures. We try to pick the ones with the potential to have a unique mechanic from the rest. We also want a wide range of visual looks, from cool, to wacky, to quirky, to cute, to creepy. So hopefully there will be something for everyone.”

GigaBash is scheduled for a Q4 2020 release date. The game is coming to PC and consoles.