You can place the blame for my achievement-hunting ways firmly at the feet of two people: My co-worker Petey and Ken Levine. Petey got his 360 about a year after I did, and it didn’t take long for his Gamerscore to eclipse mine. According to him, to achieve Gamerscore greatness, all you needed was a laptop to access achievement guides while playing, the ability to stomach mediocre games, and a penchant for grinding. As for Ken Levine, he created BioShock, the first game I ever undertook as a serious achievement-hunting endeavor. Armed with an audio diary guide and a desire to see if I had what it took, I ended up with 960 points and a new obsession. 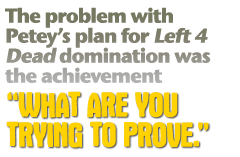 Funny thing is, I’m a pretty terrible gamer, but I’m not a bad achievement hunter. Over the years, games had conditioned me to become a collector and achievements simply stoked that desire. They became the game within the game, a way for me to see more of what the game had to offer and at the same time approach playing entirely differently from how you would to complete the story. When a game had achievements obtained via glitches, it was even sweeter, like I was getting away with something.

I was the first at work to pick up Left 4 Dead and didn’t plan on getting all of the achievements, as they seemed well beyond my abilities. For Petey though, if a game went on his tag, he was getting all of the points, an attitude which explains why his score is fast approaching 200,000 while mine is far, far behind. The problem with Petey’s plan for Left 4 Dead domination was the achievement “What Are You Trying to Prove,” which asks you to “survive all campaigns on Expert”. It’s worth 35 points, not a lot considering the amount of effort required, but it might as well have been worth 1000 points. The main stumbling block was that to survive a campaign, you had to play the whole thing in one sitting. For us this was easily a four hour endeavor. Multiply that times four campaigns and our schedules simply couldn’t handle it. It looked like Petey’s goal of 1000 points was doomed to failure.

Then he discovered a glitch that fooled the game into thinking you had completed the whole campaign on Expert when all you had to do was play the finale. As glitches go, this was the Golden Ticket. The only problem I saw was that even with this glitch, we still had to do the finales, all four of them, on expert. “Don’t worry,” Petey said, “we can so totally do the finales on expert.”

We so totally could not.

The first finale we tried was No Mercy. We could make it to the hospital roof with few problems but once we called the chopper in, it was just a matter of time. We tried running around, making a stand, hiding on roofs, hiding under ramps. Every time, without fail, we were slaughtered. All we ended up proving was that we couldn’t play Left 4 Dead. 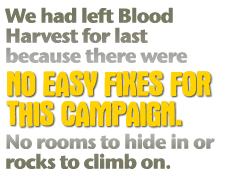 If you load up the finale on No Mercy, you can see the room for yourself. Get to the roof of the first building and look across the alley. See the doorway on the small building with the satellite dish? That’s the entry to the Jesus Room, accessible only once the rescue vehicle had been called, opened by three players frantically meleeing the sealed doorway. Once inside we were free from zombie attacks and waited until the chopper arrived. When the rescue vehicle called for us, the weak and wounded broke left, acting as bait for the hordes while the healthy broke right, throwing a pipe bomb for good measure. Amazingly enough it worked. Because one of us survived, as far as the achievement was concerned, we all did.

With that, our Friday nights for the foreseeable future were set. Valve may not be the fastest developer on the block, but their record of software support told us that the lobby glitch had a limited lifespan and once it was gone, our hopes of getting the achievement were gone with it. We consulted Valve forums for word of when a patch would be delivered. “Soon” was all we found. We researched Xbox Live certification processes, working through how long we’d have once the patch was handed off for certification. During the week we read forum threads, watched YouTube videos – anything to give ourselves a greater chance of success for the coming Friday night.

For Death Toll there was no Jesus Room, but there was a Jesus Rock that you could climb atop. As long as you picked off smokers trying to attack from the water, the zombies couldn’t get you. Well, until that one tank crowd-surfed the zombies up onto the rock and took half of us out with one hit. Even with that, we still managed to finish the finale.

For Dead Air there weren’t any rooms to hide in, making the roof of the plane the most obvious yet inaccessible choice for survival. Once again, Petey came through, finding a bug that allowed you to propel yourself on to the roof of the plane by meleeing a chaingun to “wind it up,” then jumping on it. Once on the plane, the only real threat was smokers, but yet another bug offered immunity to their attack provided someone was constantly meleeing you. And so we survived Dead Air, four of us crouched on top of an airplane, meleeing each other in the face until the plane was fueled up and ready.

We had left Blood Harvest for last because there were no easy fixes for this campaign. No rooms to hide in or rocks to climb on. We hoped that in the weeks spent completing the other finales, an easy solution would arise, but no joy. To make things worse, Valve had announced that the patch was coming.

It became clear that our only hope for surviving was to try and glitch the tank, a means of exploiting the AI of the special infected that caused them to rage quit the game if they couldn’t reach you. If you could stay away from the tank long enough, he’d leave the game. The key to this strategy was finding a safe place to hide. Blood Harvest takes place on a farm, and like all good farms, it had a barn with crossbeams navigable by humans but not by rampaging zombie tanks. We had found our spot. 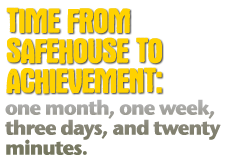 As it turned out, the beams were far less navigable by humans than advertised. Staying on the beams was next to impossible, when we were able to get to the farmhouse at all. There were times when we were all dead less than a minute after leaving the safehouse. I laughed at those times, usually laughing alone, with a tremendous respect for a game that could dismantle us so completely.

Eventually, someone else succeeded where we failed and outlined a strategy we thought could make work. On a rare Thursday night session, born out of fear of the patch, we got together to make one last try. Somehow we managed to get to the farmhouse without too much trouble. I think the AI Director felt sorry for us, having watched us fail so many times before. Once we were at the farmhouse, we took our positions in an upstairs closet where we would fight off zombies until the tank arrived. Once the music welled up, we were to all go out the window, turn the corner and wait by the chimney in the hopes of glitching the tank. It all went perfectly, until we left the closet. I saw a zombie that wasn’t there and promptly shot Petey in the stomach.

From far off, I heard the AI Director laughing.

Somehow we managed to overcome my poor aim and soon Petey and I were in the rescue vehicle waiting for our downed allies to die so the finale could finish. Time from safehouse to achievement: twenty minutes. Or, more accurately, one month, one week, three days, and twenty minutes.

You can say we didn’t get the achievement legitimately, and I wouldn’t argue. We’d never have gotten that achievement if it weren’t for Left 4 Dead‘s robust assortment of glitches and exploits. Regardless, getting those 35 points still stands as one of my favorite experiences. It wasn’t just the achievement itself, it was the four of us, every Friday night, working together, fighting together, getting pissed when things went wrong. It was Monday morning conversations on what didn’t work and what else we could try. It was working towards something and not giving up. My fellow survivors are some of my closest friends and while our friendship started from a shared love of games, it solidified on those rocks and in those safehouses, hiding from zombies, meleeing each other, and glitching the tank.

Brandon Cackowski-Schnell is a regular contributor to GameShark.com as well as co-host of Jumping the Shark, GameShark’s official podcast. He is also one of the co-founders of NoHighScores.com where he can often be found posting about games and food.

How Games Get Zombies Wrong

The Ballet of Death