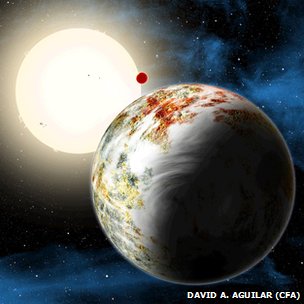 Mega-Earth is a new class of planet seemingly similar to Earth … except that its mass is 17 times greater.

Here’s your fact about planets for the day: The bigger they get, the less likely they’ll be the rocky worlds one usually imagines. That’s because at a certain mass, planets usually draw hydrogen into themselves and become a gas giant, which makes the newly identified Kepler-10c very intriguing. Discovered 560 light years away by the Kepler space telescope, 10c still has a hard outer surface like Earth’s but is actually double the width. It doesn’t sound like much, but that’s because 10c’s mass is actually 17 times greater than our own, compressing rock and prompting scientists to classify it as a “Mega-Earth” (or jokingly as the “Godzilla of Earths”).

“It’s 17 – in fact, it’s more than 17 – Earth masses, and that brings the density to 7.5 grams per cubic centimetre, which is a lot more than what we know of rock here on Earth (5.5g/cm3)” said Professor Dimitar Sasselov from the Harvard-Smithsonian Center for Astrophysics.

Scientists actually already have a classification for Super-Earths, planets between 15 to 17 Earth masses. Super-Earths are still below the range where a gas giant would form, but Kepler-10c seemingly proves that rocks planets have room to grow. That means either the theory behind the creation of gas giants will need to change, or there’s something special about Kepler-10c that makes it stand out.

Kepler-10c has scientists wondering if its surface is similar to our own world, which isn’t clear yet. If true however, that doesn’t mean that the planet’s surface will look much like the Earth. “Remember, this is a very massive planet, which means those same minerals are highly compressed,” Sasselov continued. “So, what you see in the density is mostly due to compression rather than different composition. The composition comes out as being a combination of rocks and some volatiles, probably 5-15% at most of water.”

That being said, Kepler-10c’s sun is only 11 billion years old, born from a time when stars didn’t have the heavy elements needed to form planets. If planets can be formed earlier than expected, that means life could begin earlier as well, even on a Mega-Earth like Kepler-10c.

“Finding Kepler-10c tells us that rocky planets could form much earlier than we thought,” Sasselov said. “And if you can make rocks, you can make life.”

Mario Kart 8 Is the Fastest Selling Wii U Game Ever