The lead-up to this year’s Academy Awards (aka “The Oscars”) have been marked by rule changes (there can now be “no more than 10” Best Picture nominees, instead of a full 10) and accusations that the switch to an online voting system was causing problems for The Academy’s older members – which is especially problematic because “elderly Academy voters” kind of just means “Academy voters” for the most part.

But, anyway! Let’s take a look at what a select group of mostly retired, well-connected B and C-list industry mainstays have decided will compete for the “best” of their respective categories.

Any other year this would be a pretty interesting race given the variety of the performances and performers. Denzel played against-type as an alcoholic pilot in a (forgive the pun) personal tail-spin, Phoenix’s career-best turn as an unstable Navy vet swept up into a Scientology-like cult, Bradley Cooper as a man coming to terms with bipolar disorder and a musical turn from Jackman … but it’s all pretty much window dressing. This is Lewis’ race to lose. Lincoln looks like even more of a juggernaut this year than it did before (more on that in a moment), and he’s the centerpiece of the film.

I can’t really think of a “snub” here, other than that either Ben Affleck or Jamie Foxx would’ve been more deserving of a slot than Cooper (for Argo and Django, respectively) .

Firstly, yes, it’s kind of adorable (and I don’t think un-coincidentally newsworthy) that this list includes both the oldest (Riva) and youngest (Wallis) nominees ever. The biggest “WTF?” onhand is Naomi Watts, given that The Impossible, a very, very loosely Spanish-funded but English language disaster film about a European family separated by the tsunami in Thailand, really kind of sucks and may as well not exist as far as U.S. moviegoers have been concerned. Incidentally, the heavy presence of the still relatively obscure (in the U.S., anyway) Amour this year is likely demonstrative of the skew that The Academy’s still mostly-senior citizen membership puts on the nominations. The film is about an elderly couple coping with the wife’s deteriorating health following a stroke, and while it hasn’t been noticed by mainstream audiences, it probably speaks to older Academy voters in a powerful, personal way.

Prior to the nominations, Jessica Chastain looked like the favorite to win, and probably still is, but the film – a critic’s awards darling – has been marred by a silly, trumped-up controversy and now looks shaky (see: Best Director nominations), so I’m feeling like the heat is now with Jennifer Lawrence, given that she’s the big young actress of the moment (we’re all still obliged to pretend that The Hunger Games wasn’t crushingly mediocre because Katniss is such a better role model for young girls than Bella Swan had been, right?) and because her character – a magical imaginary girlfriend pastiche (semi-punk/goth, nymphomaniac, bisexual, unstable but in a cute “quirky” way that brings her significantly older male counterpart out of his shell – appears to be the number one reason that otherwise sensible film people have lost their damn minds over Silver Linings. Repeat after me, fellas: Tiffany isn’t real. I know she reminds you of every baby bird with a broken wing enchantress who’s ever fluttered through your life just out of reach … but she’s not real, and the movie is a goddamn sitcom, at best.

Django Unchained is a movie primarily about slavery, filled with black actors. The sole acting nominee? One of the two white guys. Waltz is great in the film (though, frankly, I’d rather see Leonardo DiCaprio and/or Samuel L. Jackson in his place here, especially since he just recently won), so don’t get me wrong – it just feels kind of important to point that out. It’s also noteworthy that his character is the “nicest” person in an otherwise brutal film. His existence isn’t as uncomfortable as that of whip-scarred, vengeance-minded Django, and he doesn’t spew a constant stream of racist rhetoric like Calvin Candie or Stephen.

Interestingly, everyone on this list has already won before. Philip Seymour Hoffman had been considered a heavy favorite, but that was back before anyone could’ve guessed that The Master would be shut out of Picture and Director. That probably makes DeNiro the favorite, since the actor’s bloc is obviously seeing something in Playbook that I didn’t and because everyone is really, really glad that he’s back in a non-Fockers role and seems ambulatory again. Still, with Lincoln looking like such a heavy force this year, leading with 12 nominations, I could see Tommy Lee Jones winning handily as he’s easily one of the best things in the movie (and stars in two of the scenes everyone talks about afterwards). 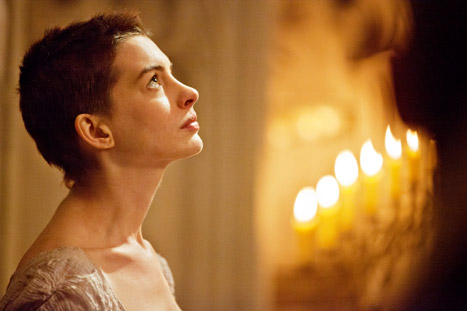 Seriously, this is the easiest call (or maybe the biggest potential upset) of the night. Every office betting pool slip should just make an allowance for a “Hathaway or OTHER” vote in this category. A rising starlet just hitting what the industry considers “prime years” for an actress? Beautiful but willing to render herself “movie ugly,” undergo a weight-loss regimen … and she sang her own song? The character is a prostitute with a heart of gold? And a suffering mother?? And she dies of Ali McGraw’s Disease in order to give the male hero something to be heroic about? The image in your head should be of Oscar tumbling back into its friend’s arms in a dramatic faint, fanning itself back to consciousness with a frilly handkerchief, swooning over having finally found the nominee who embodies everything it likes to award actresses for.

I mean, sure, the movie is terrible and she’s only in it for like fifteen minutes, but c’mon, man! You don’t get it! She. Cut. Her. Hair!

If any of the others (Sally Field, Amy Adams, Helen Hunt and Jackie Weaver) upset, it’ll be Field for Lincoln. She’s an all-time industry favorite and has somehow managed to maintain the aura of a perpetual plucky-underdog despite being well established and a prior winner. Don’t think for a minute that Oscar doesn’t adore the story of how she got the role by actively campaigning for it, despite Spielberg not thinking she was right at first.

I’m tempted to say that the simply stunning absence of Ben Affleck, Kathryn Bigelow and Tarantino make this category almost not even worth paying attention to this year. Film students will be studying Zero Dark Thirty years from now, and that its director wasn’t even nominated (virtually ensuring that it won’t win Best Picture, incidentally) will be a black mark on The Academy’s history for decades to come. By now it’s obvious that I’m no great fan of Silver Linings Playbook on any level, but if there’s one thing the movie definitely doesn’t deserve, it’s a directing nod. Russell is actually a great filmmaker, but like everything else in the film, his direction is by the numbers and never rises above your average television dramedy.

With Bigelow and Affleck both out, Spielberg almost certainly becomes the favorite here. Lincoln has nominations in almost every major category (and then some!), he’s both the biggest and among the most respected filmmakers on the planet, etc. However, since the film is now the clear frontrunner for Best Picture, it’s plausible that the directors bloc might opt for a wildcard, which would probably be Russell (ugh!) or perhaps Haneke, since given the types of films he usually makes (the moralistic horror deconstruction Funny Games is probably still his best known) this could conceivably be the only chance they’ll ever get to award him.

Since the film itself has been totally shut out, that The Wachowskis and Tom Tykwer didn’t get in for Cloud Atlas is no big surprise given what a singularly unconventional and bold work it is (Oscar prefers movies that feel exotic and new but are actually quite middlebrow and simple-minded, see: Life of Pi.) Still, not only would I say a nomination would be utterly deserved, it would’ve been of tremendous historical note as Lana Wachowski would’ve become the first transgendered Oscar nominee.

Let’s just get this out of the way for the jokers in the audience: No, I’m neither surprised nor particularly put out that The Avengers wasn’t nominated. It was a good year, and there was no shortage of better films ahead of it no matter how long the nominations list was going to be (don’t you wanna know what the missing number ten would have been, though?) and that goes for The Hobbit and Dark Knight Rises as well.

Objectively, this is a really good, interesting list; a nice mix of great movies, one profoundly flawed but interesting effort (Pi) and one two-part sitcom episode that has no business being anywhere near any kind of filmmaking awards (Silver Linings Playbook). With two of the biggest seeming competitors virtually guaranteed not to win because of a lack of directing nominations (Zero and Argo) this is almost certainly Lincoln‘s award to lose. America’s most beloved historical figure, played by one of the most respected actors on the planet, directed by Steven Spielberg and it’s actually a tremendous, smart, surprising film? The suspense isn’t exactly killing me.

MISCELLANY:
Obviously, not enough room to get to everything else, but the pervading sense of”The HELL?” hovering over the majors drifts over into everything else. The lack of a Makeup nomination for Cloud Atlas is incredibly depressing but not too shocking, since many have mistaken the intended obviousness of its character makeups for poor craftsmanship overall (there may also have been some digital work at play, which often annoys makeup voters) but that it didn’t score nods for effects, costumes or especially editing feels like a massive oversight.

Original Screenplay should go to Zero Dark Thirty, but The Academy really does seem to be averse to the film so either Moonrise Kingdom or Django could take it; neither of which would be an issue for me. Adapted Screenplay could be Argo’s consolation prize, but the Silver Linings Playbook is nominated as well and seems to be an Academy darling this year. Life of Pi will probably take Visual Effects because that CGI tiger really was that impressive and it’s the “classiest” movie in the set, saving Oscar the trouble of masking contempt at having to mouth the words Marvel’s The Avengers (seriously, Marvel? Stop calling your movies Marvel’s _____; it makes them sound more like branded product than they already are), despite The Hulk being far and away the year’s most impressive FX achievement.

The Academy Awards will air February 24th, during which time I probably need even more alcohol than usual.

Pre-order The Cave on Steam for Team Fortress 2 Goodies