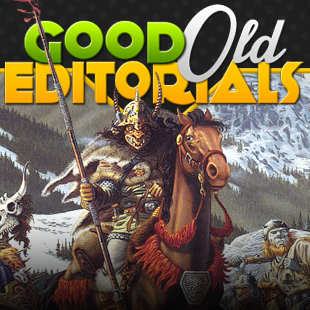 My original intention was to write about something else this week but, the more I thought about the goofy yet glorious cover art of Dragon Wars, the more I found myself wanting to touch on some of the other pieces of box art from video games that I find notable. Looking back through my previous reviews and personal game collection, I have compiled my top ten favorites (in no particular order) to share with all of The Escapist‘s lovely readers. I hope you enjoy my selections and please feel free to share your own favorites in the comment’s section.

Thanks to GameFAQs for the cover art images! 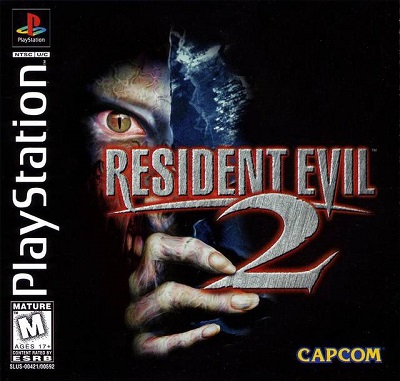 Resident Evil 2 (PS1, N64)
I’ve made it perfectly clear in the past that I think Resident Evil 2 is a monumental achievement in the genre of horror games. It’s the series’ best entry on every level. Better than any other title in the series, it used music, claustrophobic environments, and enemy placement to construct an atmosphere where every new room and unexplored corridor came with the threat of some unseen monster eager to bite your face off. Whatever flaws it might have had, it pulled that off perfectly. The American box art, in turn, is the perfect static representation of that. It doesn’t feature any of the main characters or even a full monster. It’s just a hungry zombie, peeking around a corner, waiting for its prey. 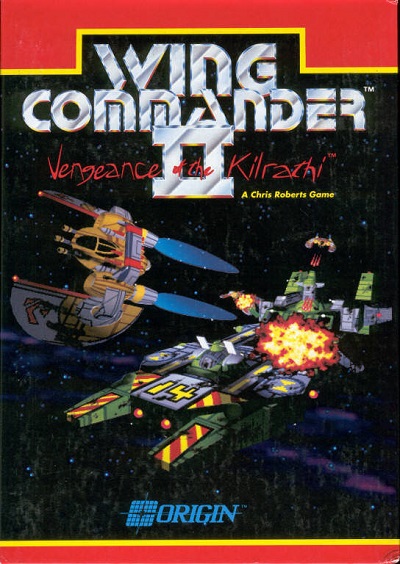 Wing Commander 2
If I’m being honest with myself, this isn’t a cover that’s really all that great, especially when compared to some of the other pieces of packing the game industry has produced. That said, I still absolutely adore the box art for Wing Commander 2. I can still remember digging fruitlessly through a bargain bin, feeling disappointed that I couldn’t afford any better games and then stumbling onto this gem with box art that promised dogfights and space battles the like of which my young mind had only dreamed of. I I usually try to avoid giving thing’s a free pass based on nostalgia. Sometimes though, you just have to go with what you love, even if it’s not objectively the best choice available. 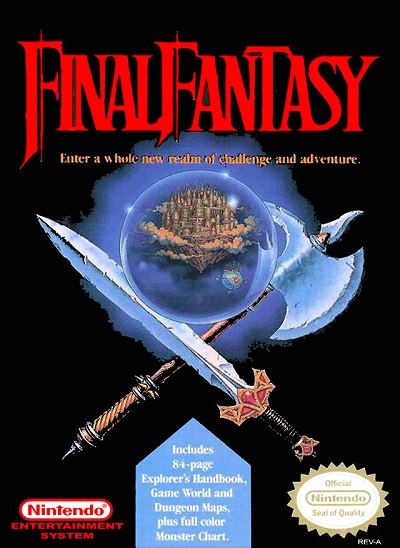 Final Fantasy (Famicom, NES)
Of all the art that’s ever graced the cover of a Final Fantasy box, this is the one that’s always stuck with me the most. Granted, this was also my first Final Fantasy game, so, again, there is a nostalgia factor at play. Beyond that though, there’s just something about this art that seems timeless to me. Compare it to Final Fantasy VII which has probably the most iconic cover art of the entire series. It’s good, but it’s also very much geared toward selling a tightly defined product. I look at it and it screams “You’re going to get to play as this awesome dude with his ridiculous sword.” Similar statements could be made for a lot of the other Final Fantasy‘s, especially the recent ones. The NES game though? The sword. The axe. The orb. The airship. It’s so simple and yet also so universal. It’s selling adventure. 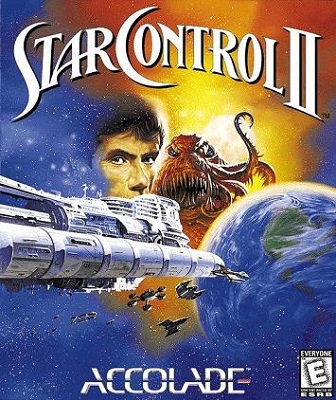 Star Control 2 (PC)
Star Control 2 is an epic game about exploring space, freeing humanity, and sticking it to an alien empire lording its power over the galaxy. It’s a huge experience filled to the brim with interesting encounters and tense battles of the like that space opera fans like myself lap up like hungry dogs. Its box art, in turn, is a perfect pulp representation of the game’s contents, presenting epic and sweeping imagery that immediately conveys the conflict (handsome humans vs. evil-toothed tentacle aliens) at its core. Add in the fact that the illustration (by artist George Barr) is straight-up luscious and it’s hard not to gush about how cool this looks. 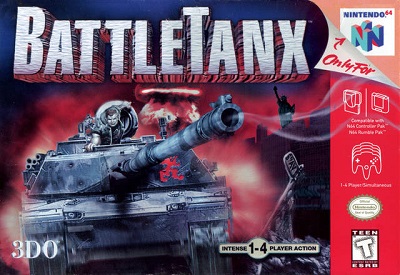 Battletanx (N64)
Battletanx is a goofy, silly game that’s short and, ultimately, more than a bit shallow. It is redeemed by the fact that it’s also, from start to finish, an exercise in awesome. Essentially Mad Max with tanks instead of cars, the game follows a gang of men who roll out on a desperate quest to rescue their wives from a quarantine zone after a female-specific plague has wiped out most of the world’s women. It’s the perfect game if you’re looking for something big, loud, and teeming with grim-dark silliness and explosions. The box encapsulates this perfectly and puts a smile on my face every time I see it. 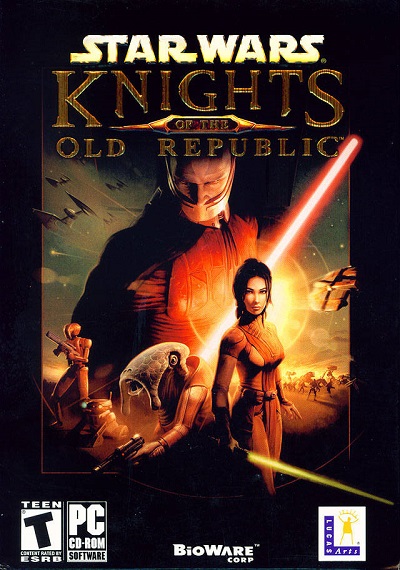 Knights of the Old Republic (PC, Xbox)
You can insult the Star Wars special editions and prequels all you want (I’d be happy to help), but you’d be hard-pressed to deny that those movies had some absolutely amazing poster art. Knights of the Old Republic boasts a box drawn in the same vein; filled to the brim with action, heroes, villains, and starships. Mind you, I have some gripes with it. It’s always bugged me, for instance, how Bastila’s face on the cover art doesn’t really match up well with her face in the game. Even so, it’s still a gorgeous piece of box art and one that never fails to give me those special Star Wars tingles. 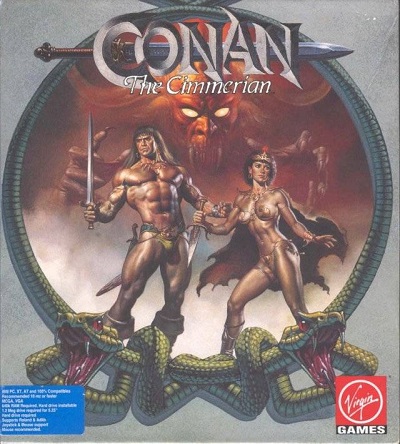 Conan the Cimmerian (PC)
This is a game that I would sincerely love to review for Good Old Reviews, if only because I love me some Conan the Barbarian. Unfortunately, I’m kind of a stickler to making sure I actually legally own all of the games I review and, as far as I know, the only place you can find working digital copies of Conan the Cimmerian are abandonware sites which, at best, exist in a space of hazy legality. All of that said, I can at least compliment its box art which, true to Conan form, is over the top, a little bit trashy and, of course, completely awesome. Illustrated by artist Boris Vallejo, it’s ridiculous and amazing both at the same time. 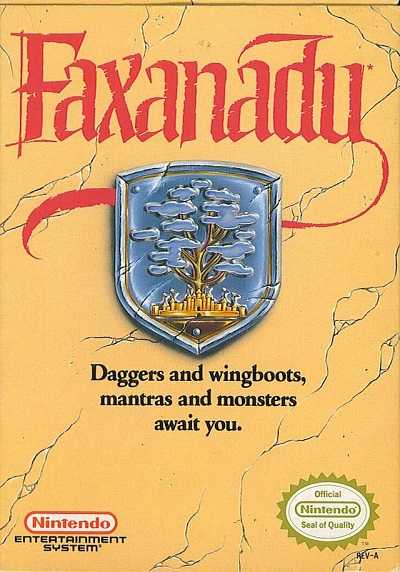 Faxanadu (NES)
I was torn between giving a spot to Faxanadu or The Legend of Zelda, both of which boast similar box concepts. And while Zelda is widely remembered as being one of the greatest games ever made, I have to say that I much prefer Faxanadu‘s box to the golden one so many gamers know by sight. Both boxes are similar (shield over a simple background), but there’s something about Faxandu‘s that simply works better for me. I think the shield symbol (emblazoned with the world tree) has a nicer design than Zelda‘s. Moreover, I feel like the contrasting colors (red, tan, silver) work together to create a much more attractive image than the silver, gold, red of Zelda‘s. Maybe I’m just a madman, but I think Faxanadu takes the cake. 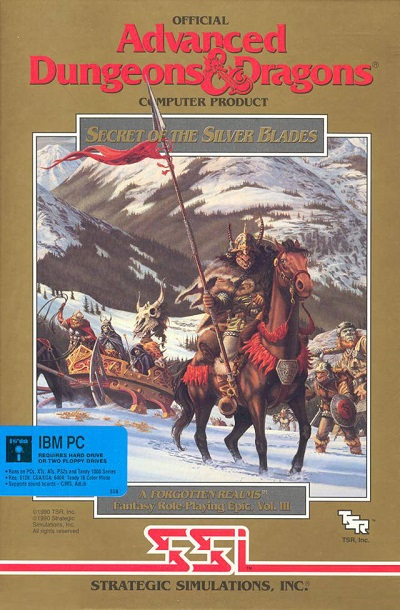 Secret of the Silver Blades (PC)
Back when I was writing my two-part History of Dungeons & Dragons in Video Game pieces, I had the joyous opportunity to peruse a lot of box art. The Gold Box games, were a particular treat thanks to the fact that they were, by-and-large, decked out in fantasy art that wouldn’t have looked out of place on the cover of The Savage Sword of Conan. Of all of the games I researched though, the one that stuck with me is Larry Elmore’s cover for Secret of the Silver Blades. I mostly attribute this one to the snow. While I love fantasy art in general, there’s something about a snowy setting that I especially enjoy. 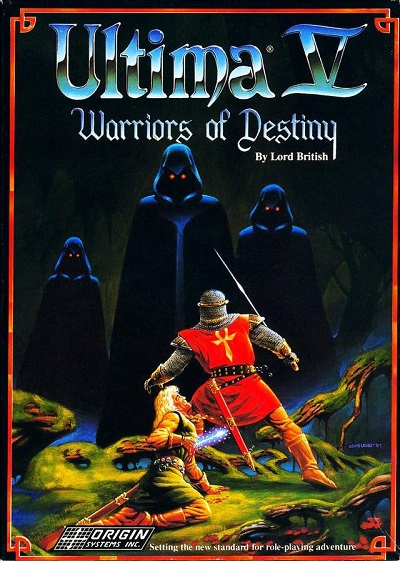 Ultima V: Warriors of Destiny (PC)
I have yet to sink much time into Ultima V but fully intend to at some point in the near future. Some of this is obviously because it would be great fodder for a Good Old Review. More than that though, I really want to have the experience of running into the Shadowlords which are, basically, Richard Garriott’s version of the Nazgul from The Lord of the Rings. Everything I’ve seen of them has made them seem impressively creepy for villains in such an old game. It helps, of course, that the cover art for Ultima V makes them look like overpowering specters of darkness that the puny player character has zero hope of beating. I’m just saying, a piece of good cover art can go a long way.

So some good news and some bad news. The good news is that I’ve recently picked up some more work which will make it easier to do things like pay bills and save for that pony I’m sure my daughter will be wanting in a few years. The bad part is that, going forward, I’ll have less time and won’t be able to continue working on Good Old Reviews. This makes me more than a bit sad because I really do enjoy writing this column and there are so many more games that I was looking forward to exploring and discussing with you all. That said, I want to thank everyone who’s taken the time to read the reviews and editorials we’ve published here. It’s been a pleasure and I look forward to finding some new excuse in the future to write about retro games again.