Do you have a Wii U? Are you longing for something to play on it that isn’t based on Mario, LEGO, or a port from another console? You’re not alone. Not only are there thousands upon thousands of Wii U owners out there who share that sentiment, there are also developers striving to use their talents to offer something up on the Wii U that you just can’t get anywhere else.

I had a quick chat with one such developer, artist for The Bridge, and Wii U philanthropist, Mario Castaneda, about Prismatic Games’ ongoing Kickstarter Project, Hex Heroes. Mario and his team were tired of gimmicks and annoyances in gamepad integration. They just didn’t like how the gamepad was being used. So, during a local weekend Game Jam, they decided it was time to do something about it.

During the summer of 2013, Mario and crew spent a 48-hour Game Jam assembling a prototype game for the Wii U. It’s a hybrid of a Party Game and Real-Time Strategy, a Party RTS, or “Par-Tee-Ess,” if you will. It’s still in the very early stages, of course, but the concept is brilliant. One player is the overseer, using the gamepad to monitor all of the goings on in the game, issuing orders to units, just like a regular RTS. The twist is that those units can be other players, playing split-screen on the television, so whether they follow your orders to the letter is always up in the air. “We know it’s not always easy to work as a team,” Mario said, but “TV players will need to rely on the Gamepad heavily if they want to get anything done.”

Imagine the four TV players as playing a game of Fat Princess, where each player picks a class (two classes in the case of Hex Heroes) and runs about the field harvesting resources, building structures, and battling enemies. The goals are different, of course – there is no chubby royalty to save in Hex Heroes – but the concept is very similar. The big difference is the strategic perspective offered by the gamepad, and what the team decides to do with it. “The Gamepad is able to see the field overhead, and as such can give better orders,” Mario explained. The team deliberately keeps the TV-players’ visions heavily restricted, so without the gamepad player, they’re flying blind of the big picture.

Mario wants this to be a game for everybody, though. “Accessibility is very important to us,” he said, although he insists that even more advanced RTS players will be able to find a challenge in Hex Heroes. Even if that challenge is largely comprised of wrangling your less-gaming-focused friends and family to do your bidding in the game. They’ll keep the learning curve gentle so families can play together, but offer different game modes for different types of players and groups. There’s Horde Mode, which has you defending innocent townsfolk for as long as possible, as well as Lair Mode, where you’re trying to find and seal up enemy lairs to stop baddies from spawning. 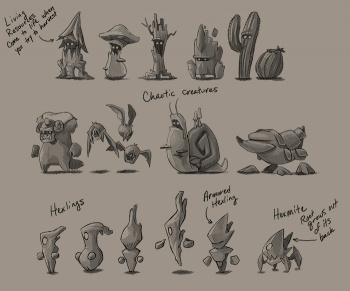 As to why they decided to go for the Wii U, Mario has been wanting to make a Nintendo game since he was 5. There were certainly options for other consoles utilizing a tablet companion app, but “The reason we shied away was because the Wii U affords the experience we want, right out of the box,” Mario said. “No other developer is milking the Wii U’s potential for asymmetric gameplay, and it’s something I’ve wanted to do since seeing the Wii U.”

Whether you’re playing on the gamepad and directing the action, chopping wood as a Woodcutter, or defending your resource gatherers from the bad guys as The Knight, Hex Heroes makes good on the Wii U’s long-unfulfilled promise of truly innovative gameplay. This is not a game you can really even do on another system (companion apps notwithstanding). “Wii U owners owe it to themselves to back us,” Mario said. His team saw a hole in the Wii U library and is now trying to fill it. Check out the Kickstarter, if that’s your thing, or just keep an eye on the game in the coming months. Prismatic Games isn’t going to just give up if the campaign doesn’t its goals so, with any luck, Wii U owners will have Hex Heroes to look forward to regardless of the Kickstarter’s success.

8 of the Most Gruesome Deaths in Game of Thrones