Japanese roleplaying games have earned themselves the dubious distinction of sharing any number of stale tropes – the dreaded trifecta of big hair, big swords, and big speeches. So commonplace are these elements, it seems like writers often stumble over outlandish premises to make their stories distinct. The main characters are mercenary-space-orphans bioengineered in vats to one day kill God? Take a number and get in line. The whole thing was the ghost of a memory’s dream? I think I remember that from Dallas. Yet for all this wackiness, one of the most bizarre vistas ever visited in a JRPG is not some medieval field or far-flung space station, but someplace far wilder – the suburbs of anytown U.S.A.

Nintendo’s EarthBound trades the standard sword and sorcery of traditional fantasy for the domestic charms of small-town life. It takes place in “Eagleland,” a country cobbled together from calming, Rockwellian portrayals of Americana. The game is set in “199X,” but it harkens back to a simpler time: Dogs wander about, 50s-style diners line the streets, and kids play together on the curbside. Everything seems picture book perfect – that is, until the indestructible robots from space attack.

The strange happenings begin when a meteorite crashes down outside of town. A young boy, Ness, hops out of bed, arms himself with his trusty bat, and heads outside to check investigate. Once the cops patrolling the area disperse, he finds a pulsing stone that cracks open to reveal … a bug. And it talks! And it’s from the future! The meteor-future-space-insect, who introduces himself as Buzz Buzz, brings dire portents of a future in ruins, an ultimate evil destroyer hatching plans upon the earth, a “chosen boy,” an ancient prophecy, and the importance of “wisdom, courage, and friendship.” Here is one talking bug with a lot on his mind. It’s a good thing he gets all this off his chest, as he is squashed by a shrieking mom mere minutes later. If only every game got rid of its speechmaker so handily, once they wore out their welcome.

From this premise, EarthBound has all the trappings of a standard JRPG – the vague words about humble heroes and big destinies, the threat from beyond stirring otherwise simple folks to adventure. We’ve heard all this before. But set within an ostensibly normal suburb, even one as broadly fictional as Eagleland, the proceedings take on a certain verve. Instead of arming themselves with swords and shields, the neighborhood kids take up baseball bats, yo-yos and popguns to confront the extraterrestrial threat. Rather than slaying goblins and trolls, they face more urban fare – crazed cultists, deranged hippies, out-of-control taxicabs, and the occasional big pile of puke. Sometimes, EarthBound offers up straight suburban analogs for standard RPG mechanics – pretty soon, you’ll become used to saving your game at telephones, or speeding around on bicycles from town to town. But often this change of scenery turns these assumptions on their ear, and forces the player to think twice. I know, for example, deep in the cockles of my heart, that a red slime is tougher than a blue slime. But what about an Overzealous Cop vs. a Cranky Lady? And how many HP does a New Age Retro Hippie have?

One other quirky thing about setting EarthBound in the present is that it hammers home the fact that the protagonists are children. Not ambiguously-aged-but-curiously-mature tweenagers that seem to crop up anytime someone needs a mecha pilot, or happening teens in a mystery bus out to foil Old Mister Johnson’s schemes. They’re garden-variety normal, dumb kids, the kind that need to get off my damn lawn, and if that baseball lands on my property one more time I’m keeping it. How many heroes, upon setting out on their grand adventure, are told to go forth and give it their all, but first make sure to change out of their jam-jams? How many heroes even own jam-jams? EarthBound‘s Eagleland gives us a world where kids can do battle against an alien menace, but still have to get by on an allowance from Dad. It’s a curious sight to see a party of straight-laced youths bob along, sporting a ruffled dress, a striped shirt and a baseball cap – a telling example of how EarthBound mixes the bizarre with the perfectly normal. The oozing, undulating monsters from beyond may seem like something out of Calvin and Hobbes, but the characters themselves are pure Peanuts. 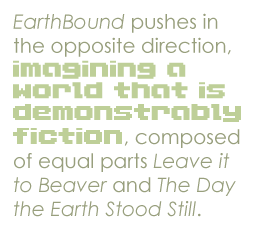 Importing the standard mechanics of an RPG into small-town American life seems weird enough, but EarthBound pushes onward, and weird becomes weirder. The story comes to include a haunted guitar, rampant psychic abilities, a zombie invasion, and a trip into a character’s subconscious, all culminating in the heroes swapping their minds into robots and sending them hurtling into the furthest reaches of time and space. Inevitably, at the end of an RPG, there is an ubervillain made of pure hate or concentrated darkness, who wants to snuff out all life to prove some metaphysical point, and in this respect EarthBound does not disappoint. The final conflict pits the heroes against the jerky kid next door who just might have it in him to destroy the entire universe, if he didn’t think he’d earn himself a spanking. Usually I find these types of schemes laughably grandiose, with the “destroy the universe” plot a stale and stupid cliché. But, you know? With this sniveling little turd, I believe it. Remember back in third grade, when some kid broke a rule and the whole class got punished? Same rules, infinitely bigger classroom.

It’s true that EarthBound does little to break away from some of the more exhausting elements of RPG design. If you’re no fan of a mostly-linear plot, or of grinding your way through a series of densely-packed enemies, you may find the game more similar than different to other, more orthodox games. For all its whimsy, EarthBound is still in an RPG of the classic tradition – but at least it has the moxie to wear it on its sleeve. The first town that the party sets off from is called “Onett.” The second is “Twoson,” then “Threed,” then “Fourside.” Yes, the game stretches off in a straight line, but there is a wink that says, “You may be strapped in on a one-way train, but it’ll be one hell of a ride.” Where other RPGs strain to present plausible, believable worlds that are capable of life and nuance, EarthBound pushes in the opposite direction, imagining a world that is demonstrably fiction, composed of equal parts Leave it to Beaver and The Day the Earth Stood Still. Eagleland is viewed through the looking glass lens of media pastiche, a chintzy shake-up snowglobe of pulp adventure and backyard barbecues. It is an America as seen from without, a land where the neat little rows of houses and picket fences are just flimsy props on some Hollywood back lot.

All this might explain something of Eagleland’s enduring appeal. In daring to present an obvious fake over a belabored fantasy, EarthBound still manages to present a world as interesting and inviting as any that have come since. Due to its unique premise, it remains an outlier – now, two decades after the first game in the series, the fantasy staples that inspired other JRPGs have ossified into brittle clichés, but EarthBound remains one of the most unique examples of its genre ever made. But this very success is ironic – EarthBound is actually the second in a trio of games, known as Mother 2 in Japan. The first and third installment have never been localized, save by a few intrepid fans. Despite having a vocal fanbase, the Mother series have yet to see an official translation, or a virtual rerelease. The reasons for this are partly pedestrian, hinging on difficulties in copyright – as it turns out, imagining an America of Coca-Cola and McDonalds is a really great way of running afoul with those actual trademarks, and the localization of such a property may have people skittish. 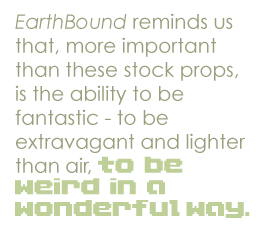 This is the odd little cubbyhole that EarthBound occupies. An “American” game that resists “Americanization.” A fiction-of-a-fiction that somehow feels more tangible than fact, and an ostensibly familiar setting with more inventive spirit than a dozen other games set in floating cities or megaverses, in data streams or dreams-within-dreams. There may be a lesson here about the dynamics of fantasy – at this point, we are more than familiar with the stock elements that shape such a genre: swords, spells, big-pointy-ears. A game like EarthBound reminds us that, more important than these stock props, is the ability to be fantastic – to be extravagant and lighter than air, to be weird in a wonderful way. EarthBound is a game of psychic kids and crooked cops, of skate punks and spiteful crows, of oracular dung beetles, mechanical octopuses, alien robot ghosts, of diamond dogs, devil machines, and mindless, cosmic beasts from beyond.

Brendan Main hails from the frosty reaches of Canada, where he spent a happy youth in igloo suburbia. EarthBound‘s story of aliens attacking the suburbs makes him wonder who the real aliens are. SPOILER WARNING THEY ARE US.