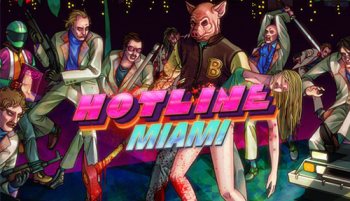 It turns out Hotline Miami is really popular with those of the rum-drinking, parrot-toting persuasion.

Some of the game’s torrent popularity might be down to developer, Jonatan Söderström’s, decision to extend the olive branch to pirates rather than bellow legal threats at them. When a cracked and buggy version of Miami turned up on The Pirate Bay, Söderström elected to help users who couldn’t get the game to run and even suggested that the uploaders should update the torrent with a patched version of the game.

“I definitely want people to experience the game the way it’s meant to be experienced,” he said at the time. “No matter how they got a hold of it.”

While Söderström’s pirate-friendly approach – and his willingness to engage with critics via social media – has bought him a lot of good will, it’s unclear how many pirates he managed to convert into paying customers. Regardless, the game has done well for an excruciatingly hard indie project from an unknown developer, with around 130,000 copies sold in seven weeks.

“That’s what he’s like,” explained Struthers. “He just felt he didn’t want people playing the buggy version of his game however they got it. He wanted them to get the patch. He basically said, ‘I’m not going to criticise this, it’s a fact of life. It would be nice if guys could find it within themselves to pay for it, but that’s the world I’m in, so you know, you just have to take it for what it is.’