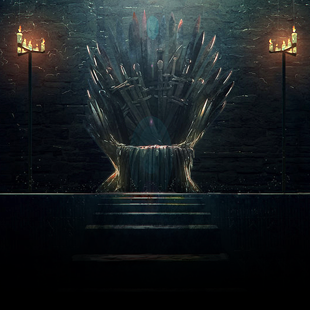 Game of Thrones season five is now in full swing and, as usual, it’s captured the attention and imaginations of its millions of fans. We here at The Escapist thought it might be fun to spend a little time paying tribute to the show by collecting and showcasing some of the fine art that its many fans have produced over the years. With the help of our friends at DeviantArt we’ve assembled a gallery that we think you’ll enjoy just as much as we did. 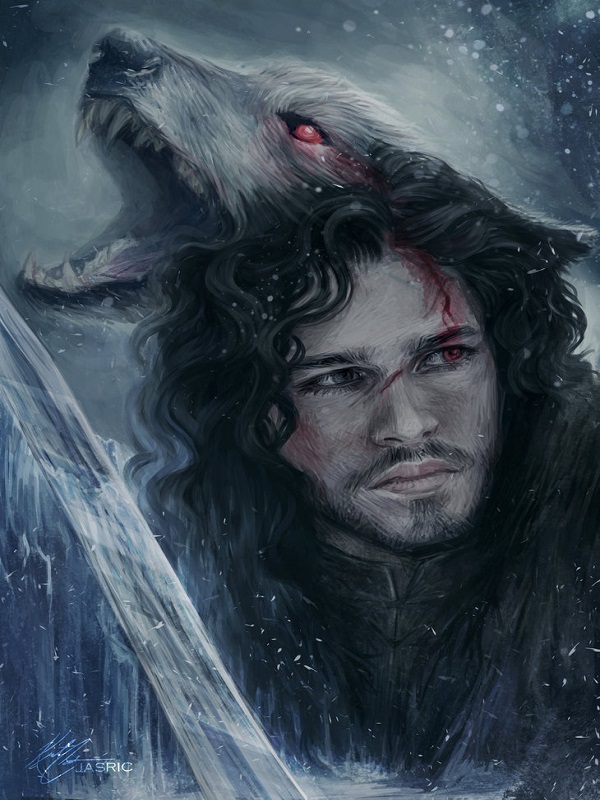 Perpetually spat upon by pretty much everyone and everything in his life, Jon Snow is the bastard and kicked puppy of the Stark clan. On the plus side, he definitely got the coolest Direwolf out of the bunch. Both man and wolf look fantastic in this piece by anonymous artist Jasric. 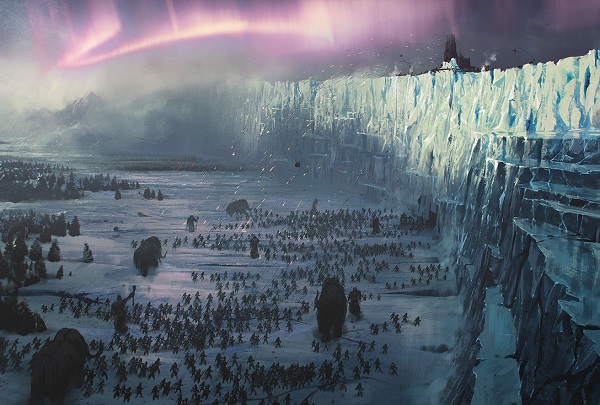 The Watchers on the Wall by Grzegorz “88grzes” Rutkowski
If there’s one place where Game of Thrones sometimes suffers, it’s the recreation of the big battles in George R.R. Martin’s books. It’s understandable, of course; live-action battles are expensive to film and HBO doesn’t have the Iron Bank to fall back on when it comes to the show’s budget. That being the case, the battle to hold the Wall in season four’s Watchers on the Wall was probably the series’ most successful large scale sequence. The battle looks equally impressive in this art piece by Grzegor Rutowski. 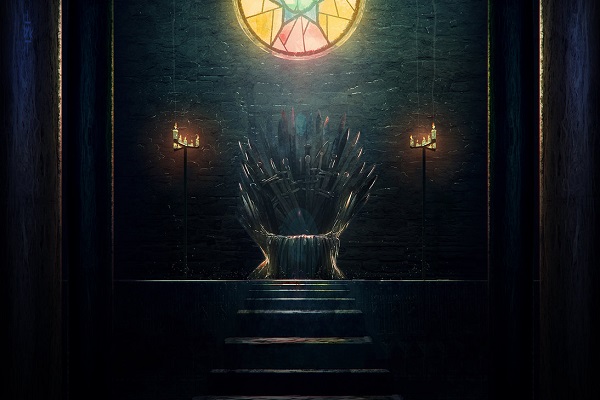 The Iron Throne by Dumaker Martin

Game of Thrones isn’t all gigantic walls and wildlings, though. A tad further south (understatements being our specialty), lies King’s Landing and the all-important Iron Throne. Made from the melted swords of the lords of Westeros, it’s the seat of the king and the chief symbol of power in the Seven Kingdoms. While it’s been envisioned different ways by different artists, we’re personally fans of the version created by DeviantArt user Dumaker Martin. 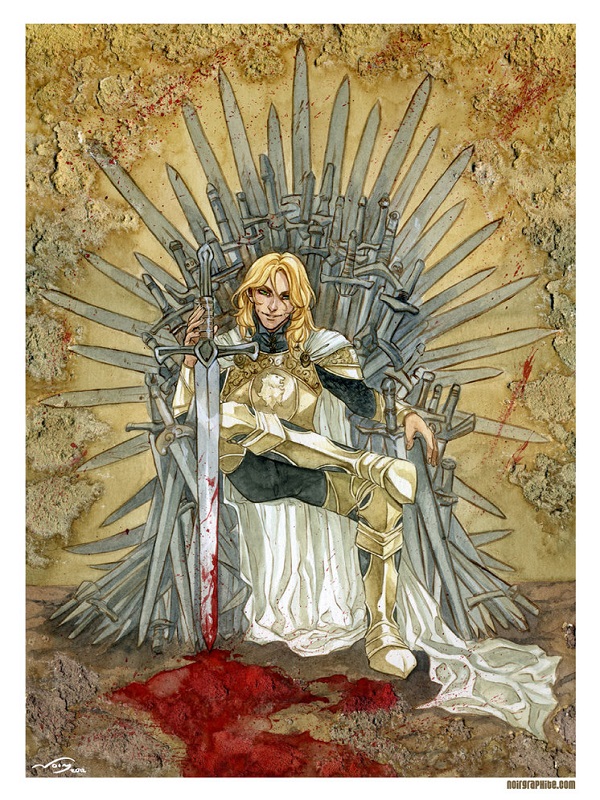 As much as some covet the Iron Throne, there are others who are haunted by it. One of these is Jaime Lannister who, after slaying the Mad King in Robert’s Rebellion, made the poor decision of taking a post-murder breather in the infamous chair. Ned Stark would shortly after barge in on the sitting Lannister and immediately decide that he wanted the crown for himself. Way to jump to conclusions Ned. 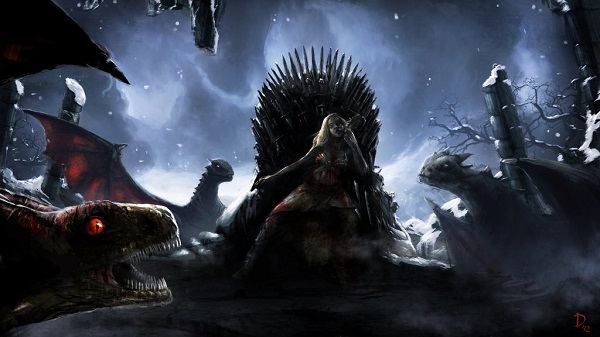 Lord Stark might have been better off turning his concern toward Daenerys Targaryen and her quest to reclaim the Iron Throne. Granted, Dany wasn’t exactly at her most powerful during Ned’s reign as the Hand of the King, but in the long run she’s definitely proven to be a greater long-term threat than the Kingslayer. Why, you ask? We’ll give you a hint: they’re winged, scaled and bigger than a pony. 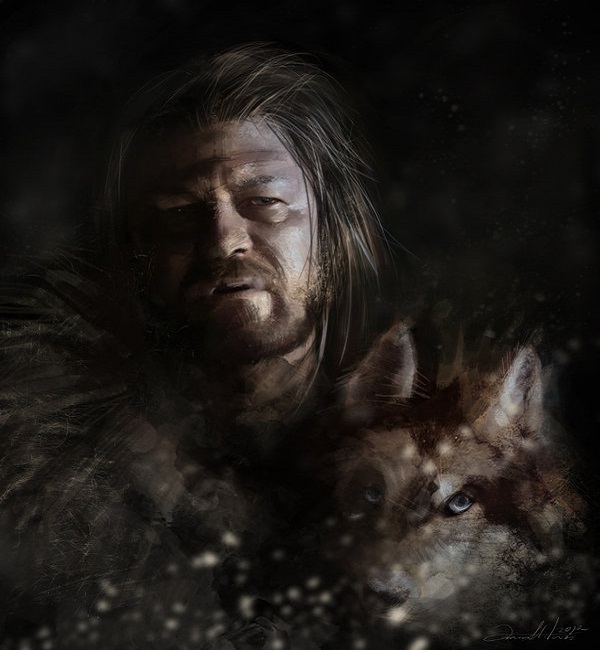 We can’t be too hard on poor old Eddard, though. After all, it’s not like Jaime Lannister was a stand-up guy. Heck, even before the whole “pushing Bran out of a window” thing, he was a bit of a creeper. Besides, whatever mistakes Ned might have made, they at least came from a place of honor. His dedication to truth, justice and the Westerosian way might not have been too helpful to him in the end, but he’ll at least be remembered by his family as a good and respectable man. 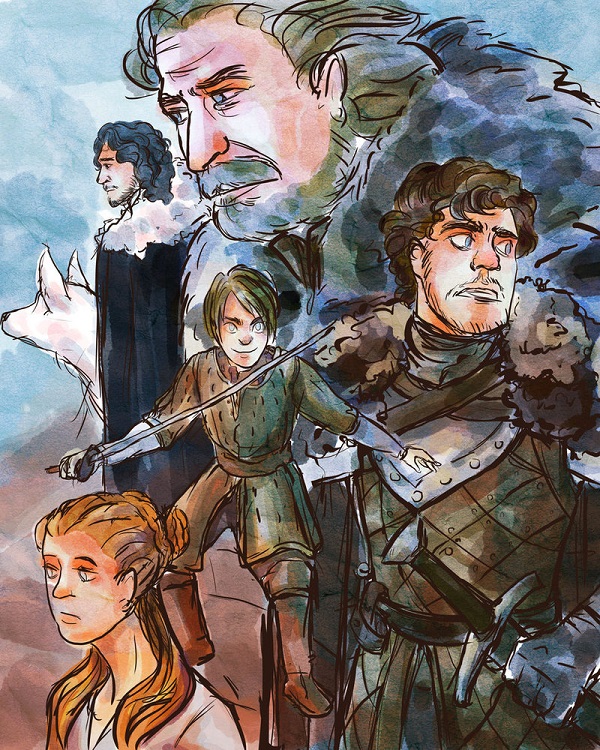 Or at least he would be if they weren’t dead or constantly fighting for their lives. Sincerely, when it comes to the nobility, who else has suffered as much as the Starks? Whether they’ve been crippled for life, emotionally traumatized or just straight-up Red Wedding’d, the Stark Children have been through some insanely rough times since the departure of their dear old dad. In fact, part of why we like this portrayal of House Stark is that it’s a bit more cheery looking that we usually get to see them. 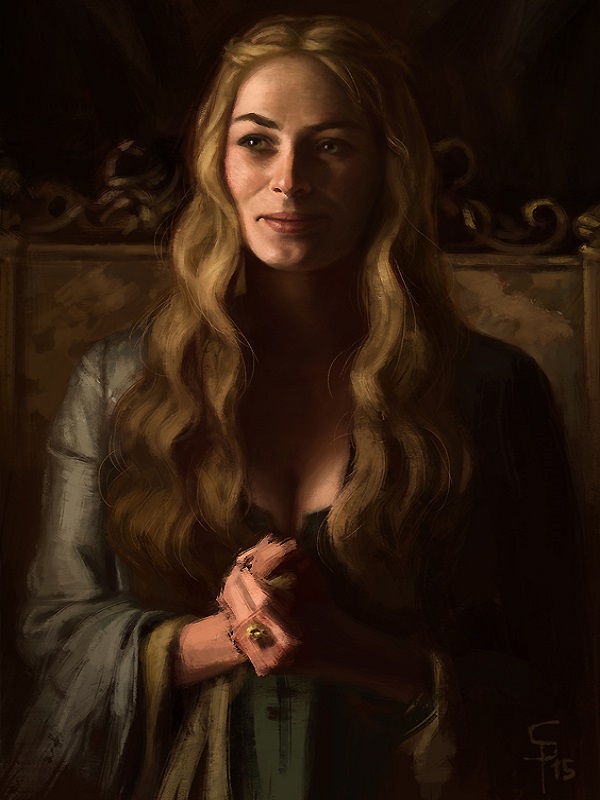 Not that the Lannisters are all smiles and good times, mind you. Cersei Lannister might be smiling in this illustration, but most of the time she comes across as being absolutely miserable. Then again, that could just be a side effect of being married off to a boorish adulterer king and giving to three children sired by your twin brother. That’s just our guess, though. 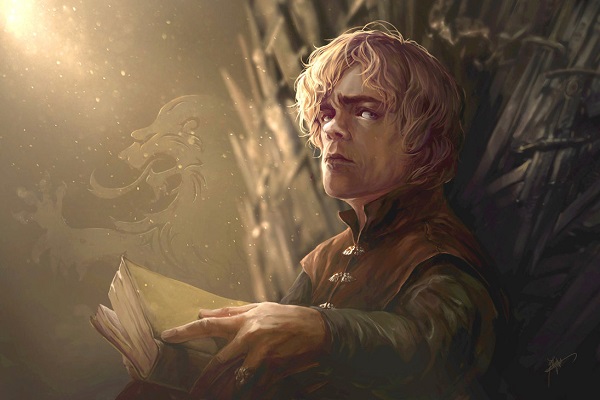 Mistreated by life since literally the day of his birth, Tyrion Lannister managed to overcome his problems and become what we in the business of high-falutin word-smithery like to call “awesome.” Always equipped with either a cup or a quip, Tyrion is probably the most consistently likable character in both the show and books. 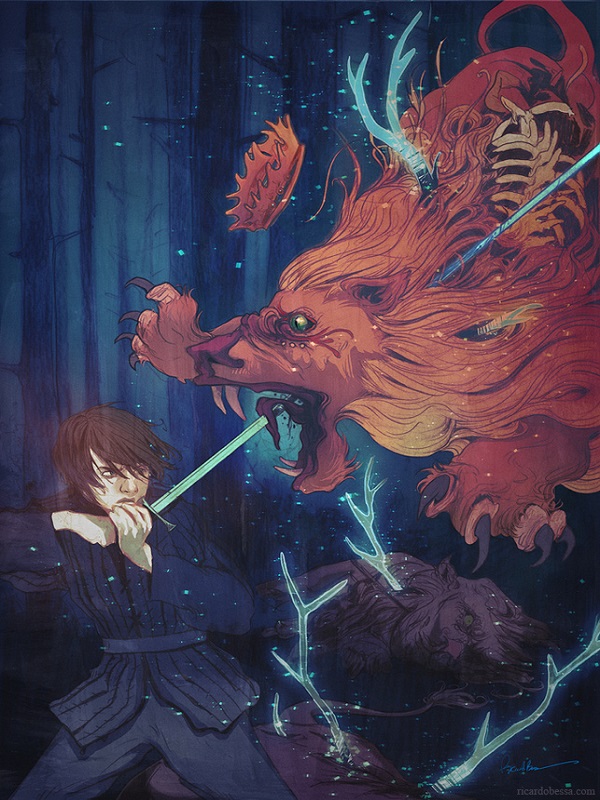 Another big fan favorite is Arya Stark. Easily the most bad ass teenaged girl in all of the Seven Kingdoms (and then some), her standard response to the horrors and misfortune of her life is usually to start murdering people. In a land filled with so many deserving candidates, it’s hard not to cheer her on. 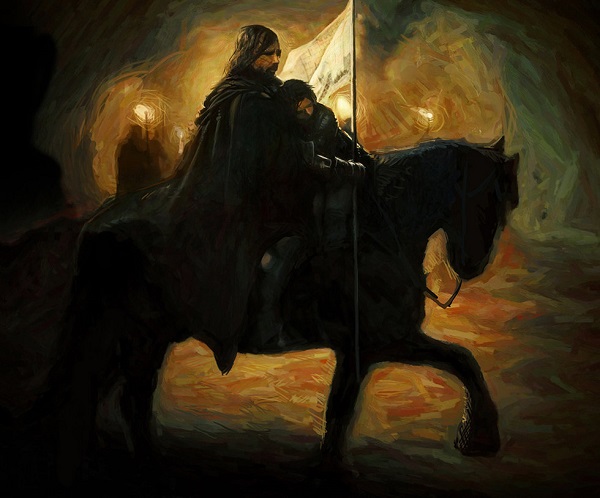 The Hound and the Girl by Ismael Bergara

If you want to see Arya at her most awesome however, you need to give her an equally cool partner. Season four did exactly that, pairing her up with the Hound, a burned warrior with a pragmatist attitude and no qualms about killing. While their time together definitely didn’t end smoothly, their relationship produced some of the best moments in the entire show. 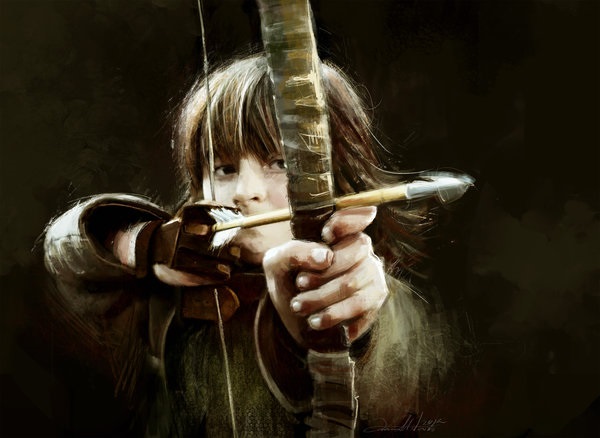 Served one of the rawest deals in the series, Bran Stark has had only a few brief moments of screen time where’s been able to exercise the use of his legs. Sadly for him, one of those early scenes was spent being showed up by his younger sister during archery practice. Who knows, maybe George R.R. Martin will make it up to him and let him use his fancy Warg magic to take over a dragon when Daenerys finally makes her way to Westeros. 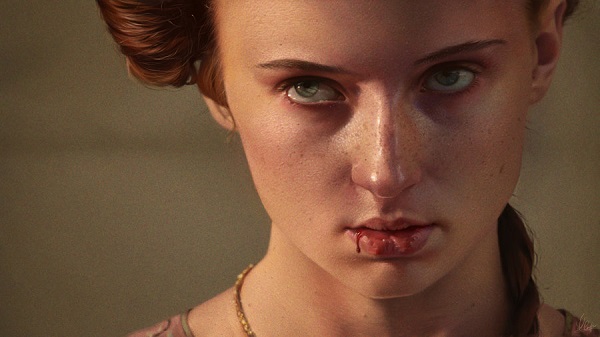 No jokes or snark for this one. This is just an awesome, eerily lifelike picture of Sansa Stark. You can see the process of its creation here. 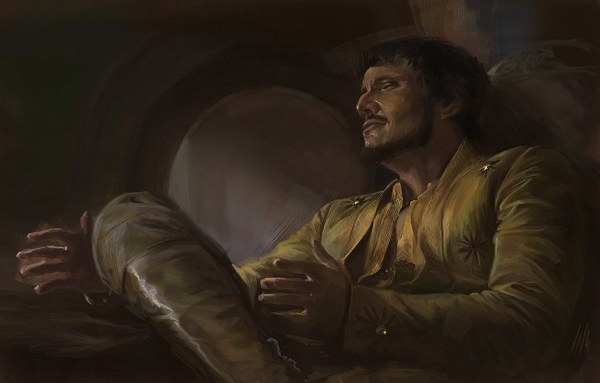 Prince Oberyn Martell walked onto the scene in season four and immediately earned fans with his passionate attitude and exotic sensibilities. Whether or not that’s a good thing depends on how well you deal with sudden, horrifying loss. Regardless, the Red Viper probably had more swagger than every other character on the show combined and that, I think, is what this picture captures. He just looks like the kind of guy who can dominate a room without even trying.