Black Jesus may play like straight-up parody, but it’s a comedy series that speaks directly to modern social controversy.

This past weekend, an otherwise average American town — in Missouri, specifically — looked for all the world like a dispatch from the Gaza Strip as a local police force rolled out enough hardware to cut a promo for the next Call of Duty against the town’s own citizenry, who had assembled in public protest over the shooting death of an unarmed black teenager by that same police department the previous week. It did not go well.

In the discussion surrounding the events, a narrative emerged in the media of a conflict over “depictions” of the shooting victim by the opposing “sides” of the debate in the press. On the protests’ side, white-hot outrage at the police for releasing a video showing a man who may have been the victim committing an act of petty theft entirely unconnected to the shooting. On the other side, anger at the protesters (and their supporters in the press) for that outrage, and the renewal of ancient talking-points about the tendency to use well-composed family snapshots or graduation photos as the “default image” of such victims rather than “what they really looked like” (see: it somehow being relevant that murdered teenager Trayvon Martin had at some point worn gold teeth) — as though the Liberal Media Boogeyman was covering up some incontrovertible proof that young black men really are just inherently scary enough for it to be justifiable (or “understandable”) that panicky cops (or neighborhood watch vigilantes) might be scared enough to draw their guns and open fire as though The Predator was bearing down on them.

It’s typical for that second group to refer to the “misleading” friendly images in spiritual terms for maximum “satirical” effect: “They tried to make him look like a cherub. A little angel. A saint.” So it almost feels like something more than eerie happenstance that an accidentally-perfect parody (by exaggeration) of that innate absurdity — bigots tacitly admitting through projection that young black men from the inner city would practically have to be Christ Himself to earn the benefit of their doubt — emerged onto Adult Swim a week before any of this went down in the form of Black Jesus, a comedy series about the daily life of a young black man coping with (among other things) unfriendly police attention in poverty-stricken Compton, California… who just so happens to actually be Jesus Christ.

Hatched by Boondocks troublemaker Aaron McGruder and featuring Gerald “Slink” Johnson (Lamar from Grand Theft Auto V) in the title role, Black Jesus is yet another Adult Swim offering (unrelated to this memorable bit from AS mainstay Family Guy) that feels like a satire whose point of reference doesn’t actually exist but can be imagined to have existed. Specifically, “The story of Jesus, but with young black characters in a present-day ghetto instead of Roman-occupied Judea” sounds so much like the premise of some insufferably self-satisfied film school thesis that goes on to become an indie-circuit festival darling that it’s hard to believe it doesn’t actually exist… and Black Jesus plays out as though McGruder and company sat down and said “Hey, remember that super-pretentious movie about a black Jesus? Let’s take the piss out of that by redoing it as one of those corny ‘One Magic Person In An Otherwise Normal World’ sitcoms!”

Except that American sitcoms seldom venture into communities like Compton — save for maybe a Very Special Episode where a car breaks down and white teenagers learn a lesson about not judging an ebook by its cover .gif. White Hollywood in general prefers to glance at the ghetto only when the story serves the purpose of “There, but for the grace of God, go I” moralism — unable to even consider that the residents thereof can exist as anything but avatars for abject misery. That was the impetus behind the first Friday movie and, I think, the secret to its enduring popularity: A deliberate counterweight to the depressing melodramas about “hood life” that were all the rage at the time. A movie with the quiet audacity to suggest that the everyday lives of black folks in the American inner city also include joy, laughter and comic absurdity.

In other words, Black Jesus would be, by definition, an exceptional series even without its central gimmick. An authentic-feeling “day in the life” situation-comedy about a group of friends making the most of it in Compton? Yes, please, let’s run that up the flagpole and see if it flies. That the nominal leader of said group happens to be a walking lightning-rod for controversy — a boisterous, jovial black guy who dresses like and purports to be Jesus Christ — would almost feel like tone-derailing overkill if the whole product weren’t so self-assured and confident. Like Black Jesus himself, it’s a series that looks ridiculous but makes keeping a straight face seem so effortless it’s almost hard not to buy in.

Just so we’re clear: The show (only two episodes old, granted) doesn’t appear to be playing it “cute” with its premise. Johnson’s Jesus is the real deal — Jesus Christ, living in a van in Compton and hanging out with a new group of disciples getting into mischief, with an aesthetic conceit that everyone in the neighborhood is aware and accepts that this is Jesus… they just don’t think it’s that big of a deal. He performs minor miracles (turning bottled water into cognac, causing an alibi to materialize in a police case file) but mostly he just goes about preaching a philosophy of love and kindness and attempting to affect small-scale good works while still getting into (and out of) trouble with his friends. 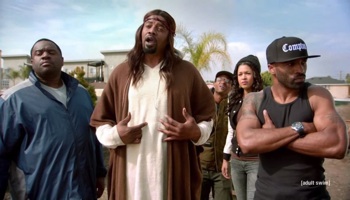 Thus far, it’s not a series that goes for the big laugh or the explosive slapstick payoff, preferring to let the “slice of life” humorous situations run their course while relying on the absurdity of the main character’s existence to serve as an omnipresent punchline. There’s nothing that funny, for example, about a grumpy building superintendent telling the main cast that they can’t have a barbecue in the courtyard… except that Black Jesus happens to be there, working the grill.

The same can be said, at least early on, for stabs at full-blown social commentary. The central image of a dark-skinned Jesus Christ walking, crown of thorns, robes and all, through a “bad neighborhood” is incendiary enough on its own that you don’t really need some kind of bigger moral/philosophical hook to make things meaningful: “Jesus getting interrogated by the LAPD” or “Traffic cop tickets a homeless man, turns out it’s Jesus” are loaded enough without some kind of plot-specific reason for their occurrence.

Even the scenes of The Son of God hanging around smoking weed (or getting involved in other minor acts of criminality) with his disreputable chums comes pre-loaded with sly weightiness, practically begging a reactionary critic to sputter about how “The REAL Jesus wouldn’t associate with crooks and prostit- oh. Wait…” This is comedy writing by way of Mr. Miyagi: “You see, Danny-san, you brought the impact to yourself!”

That said, while I’d be perfectly fine with the series just staying where it is and letting the characters and their exploits speak for themselves (an over-arching story about Black Jesus’ desire to start a community garden has already begun to take shape, but that’s about it) it seems almost inevitable that Black Jesus is building toward something bigger — its world is too confidently-built and its characters (even this early) too fully-formed for there not to be a plan. Plus, starting from what sounds like a one-joke comedy sketch (“Jonny Quest but the dad’s an asshole!,” “Black Metal Spinal Tap!,” “Davey & Goliath” as a brutal satire of American Christianity) and slowly revealing something bigger and deeper happening within (heroic-scifi characters surviving in a post-optimism world, an apocalyptic fantasy epic, an improbably-moving redemption narrative).

And it’s not like it would be any great stretch for Black Jesus to go big — it’s about a big character. It’s easy to see how they might gradually segue from the day-to-day adventures and the community garden story to a full-on modernizing of the Crucifixion/Resurrection narrative, most obviously. But also, isn’t Jesus being up and about in the present usually… part of The Apocalypse?

I want to see where Black Jesus is going. But for now it’s funny, clever and quietly insightful — exactly the sort of outside the norm programming a niche outfit like Adult Swim is supposed to exist to provide.