After seeing numerous comments from you, our lovely audience, that there are far, far better Facebook games out there than Farmville, I decided to do a bit of investigating for myself. To be perfectly honest, I didn’t believe you. Not that I consider Farmville to be the pinnacle of game design, but every other Facebook game I’d ever tried varied in quality between moderately mediocre and complete crap (except for Bejeweled Blitz and Hexic, that is), so I eyed the possibility of finding something worthwhile with understandable skepticism. Much to my surprise, I did find something I enjoy playing. It’s just not actually a game.

Dungeons and Dragons: Tiny Adventures at first appears to be a pretty solid, albeit quite simple, D&D romp. You choose your class, equip your gear, and select an adventure from among a buffet of outings such as “Dragonjaw Dungeon” and “Keep on Coilspine Ridge.” The tale unfolds in Encounter Updates, which spell out exactly what kind of challenges your hero faces and the consequences of how well (or not) he rolls. Here’s an example, from a recent adventure my hero Elleryn had:

The first stab didn’t hurt too much — it was only a flesh wound. It was the eighth one that did the most damage.

Sounds like a fun little adventure, doesn’t it? But you don’t actually get to do anything. Every few minutes, you can click the “Update” button to reveal a new chapter in your adventure, but once you’ve started, you don’t get to make any choices. You don’t roll for yourself, you don’t decide whether to turn left or right, you don’t even get to turn tail and run. You just wait for the opportunity to spectate as your hero’s story develops. It kind of sucks.

And yet I play every day, all day, and so do several of my friends – two of whom run their own D&D campaigns. We’ve all agreed that yes, the game is pretty lame, and yet we keep playing, crowing over our hauls of loot, healing each other when the opportunity arises, and comparing notes on how things played out. We bemoan the fact that we can’t trade items, that nothing good ever seems to be for sale, and that you have very little control over when you can use a potion. And we keep on clicking that Update button. 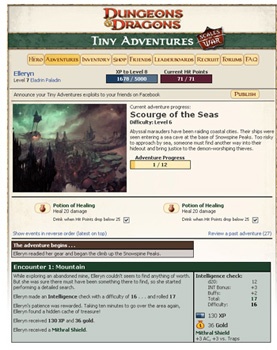 To be fair to Tiny Adventures it is very well written, doles out swag just infrequently enough to make it exciting when you do find some, and doesn’t bombard your pals with unwanted alerts that you’ve just gotten your ass kicked by a bunch of gnolls. As Facebook games go, it’s pretty unobtrusive, and the lack of control you have over it actually makes it a good introduction to Dungeons and Dragons. By reading the adventures, you’re exposed to common elements of the D&D world – like types of creatures and locations – as well as concepts like armor class, stat rolls, and hit points. You get the D&D flavor without actually having to deal with confusing stuff like how many dice to roll or whether or not your barbarian can use a Wand of Ephemeral Light.

For anyone already familiar with the world of paladins, orcs, and D20s, it’s a bit of a snooze. So why do my friends and I keep hammering away at it day after day? I’ve been pondering this for the past two weeks, and the answer I’ve come up with is, simply, because we’re all desk jockeys. We’re not in front of the computer to chat with pals, or watch YouTube videos, or any of the other numerous things people do to while away the hours. We’re in front of the screen for nine or ten hours a day because we’re working, and while we might be able to spare a few minutes here and there for goofing off, the kind of attention required by a real D&D campaign simply isn’t possible.

In that context, Tiny Adventures is immensely appealing. It gives us a taste of the D&D gameplay we all love so much, but doesn’t detract much from the mental resources we need to do our jobs. If we forget about it for an hour or two, it’s ok – the encounters will just all come out in a tumble the next time we hit the Update button. If we can’t play for days at a time, no worries – the carrion crawlers and hippogriffs will still be there waiting for us whenever we get a chance to stop by. The adventures themselves make for pretty good reading, too. I was genuinely amused when I blew a roll and fell headfirst into a dungeon, and felt mildly victorious when I snuck past some foulspawn and emerged with shiny loot.

Would Tiny Adventures be a better game if it allowed players to take a more active role? Well, sure, I think so, but ironically, that would likely prevent me from playing it. If it required more of my attention or effort, I wouldn’t be able to play it while I’m at work, and when I’m out of work, I have things I’d rather do than putter around on Facebook. I’m actually quite happy that Tiny Adventures is less of a game, and more of something I keep around to make being stuck at a desk for 10 hours a day more palatable, like my Cute Overload calendar or my Sackboy plushies. All I really want Tiny Adventures to be is a pleasant distraction, something to take my mind off of work for a few minutes at a time, and it does that quite well.

Even if it isn’t really much of a game.

Susan Arendt lost a fight with a river during her first Tiny Adventure.

Not Hardcore Enough to Raise Chickens